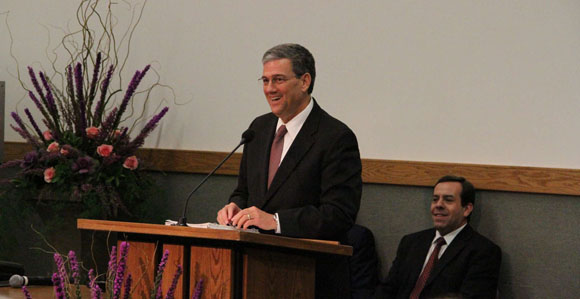 Elder David F. Evans of the Seventy, who serves as the Executive Director of the Missionary Department, speaks at the MTC January 15. Photo by R. Scott Lloyd.

President Thomas S. Monson’s announcement at last October’s general conference lowering the age of eligibility for missionary service is more than a mere policy shift, the Executive Director of the Missionary Department said.

“As one who was an eyewitness to every step along this way, I can tell you that this was a revelation from heaven,” said Elder David F. Evans of the Seventy. “This is the Lord’s outreach to this generation, and this is the Lord’s own work of hastening His work by calling more servants.”

President Monson announced at general conference that effective immediately the age of missionary eligibility for young men would be lowered from 19 to 18 and for young women from 21 to 19. That has already resulted in an overwhelming increase in interest from young people in serving missions. Elder Evans said the feeling among the Brethren is that “there will be thousands of young men who would not have gone who now, with this new opportunity, will choose to go.”

“Do you know what that will do to the Church going forward?” Elder Evans asked. “If you take a thousand a year that remain active and faithful and they remain in the temple, and you project it out over a generation or two until they are grandparents, the numbers become most remarkable.”

Elder Evans showed a video recording of the announcement from President Monson and commented that it was followed by an immediate surge in applications, largely from young women, though they are not under the same mandate to serve as are young men, for whom missionary service is a priesthood duty.

Elder Evans told of a young man in his own ward who wrote him a letter at Christmastime thanking him for frequently bearing his testimony of missionary work.

“When President Monson made this announcement, my whole class of seniors began to change,” he wrote. “Now we’re focused in a way we’ve never been focused before. We talk different, we think different, we date different, we’re trying to be ready to serve missions.”

Elder Evans cited Alma 8:16, which tells of Alma and his missionary companions who responded to a commandment from an angel of God and “returned speedily” to a city from which they had been cast out. He compared their behavior to the response from missionary-age young people to the announcement from President Monson.

“In Alma’s case, he got it from an angel; in this generation’s case, what has happened is they received it from a prophet of God,” Elder Evans said.

The reaction, he said, “spread like wildfire” through the youth of the Church. He quoted several posts from youth on Internet social media such as Twitter.

Elder Evans said that immediately after general conference, the number of missionary applications was four to five times the previous number. Though that has since declined to some degree, it has never dropped lower than about twice the normal average for this time of year.

“This will be, not only numerically but spiritually, the greatest generation of missionaries we’ve ever had,” Elder Evans declared. Even so, he cautioned, “They will need to be taught and counseled, and in some cases they will need to be helped so that they can receive the full blessings of the Atonement and to repent of the things they’ve done wrong.”

He counseled the departing leaders, “The doctrine forever and ever that you will need to teach as part of your teaching the doctrine of Christ is faith in the Lord Jesus Christ and His Atonement and repentance.”

Alluding to Alma’s imagery in the Book of Mormon, he said, “Your job … is to help each missionary feel to sing the song of redeeming love and to help them feel it again and again throughout their time at the MTC.”