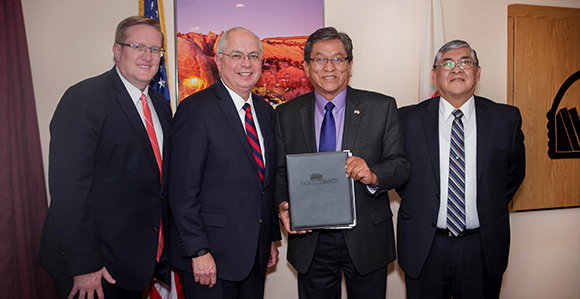 “Our mission is to gather family history information, to preserve those source records so that individuals will have access to find out what their relations are, and we freely share these records any place in the world.” —Elder Larry J. Echo Hawk, General Authority Seventy

Under the direction of the First Presidency, Elder Larry J. Echo Hawk, General Authority Seventy, presented the family history of President Russell Begaye, president of the Navajo Nation, to him on Monday, March 27.

“They don’t do it for just anybody, but people in leadership like the president of the United States and others, so it’s really a special moment for our family and for the Navajo Nation,” President Begaye said. “It’s really good to see the LDS Church really reaching out.”

Elder Echo Hawk told President Begaye how the Church is the largest genealogical organization in the world, with about 4,500 family history centers in 70 countries around the world. “Our mission is to gather family history information, to preserve those source records so that individuals will have access to find out what their relations are, and we freely share these records any place in the world,” he said. “In particular, we have an interest in Native American records. We've already connected up with the Chickasaw Nation in Oklahoma and the Choctaw Nation and the Cherokee Nation. As you know, along with the Navajo, these are some very significant tribal nations.”

The Navajo Nation is the largest land-based tribe in the United States with the second-largest Church membership among Native American tribes.

President Begaye’s family was also in attendance. “My whole family thanks you,” he said after receiving a book containing information and photos of his ancestry. Collecting his family history is a more difficult process, he said. “Not being born in hospitals and having multiple names, it’s just a little bit more intensive, a little more challenging trying to locate where everybody’s at and who’s who within our lineages as Navajo people. I’m looking forward to seeing the book and see how it was pulled together.”

The Church has already presented family histories to leaders of the Chickasaw, Choctaw, and Cherokee Nations. “We’ve had those tribal nations that we’ve worked with already come to Salt Lake City, and we’ve trained them about record preservations and they participate in [RootsTech].”

“What we really encourage is to preserve records,” Elder Echo Hawk said. “If these records are ever lost, that’s a loss to a large number of people because they won’t be able to find their family trees.”