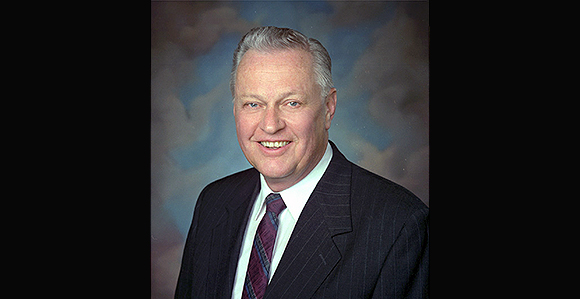 Elder Earl Merrill Monson, who served as a General Authority Seventy from 1998 to 2002, died at age 84 in his home in South Jordan, Utah, on Thursday, May 18.

Elder Monson was sustained to be a General Authority Seventy on April 4, 1998, at the age of 65 and served in that calling until his release on October 5, 2002. (Elder Monson, whose ancestry is Norwegian, is not related to President Thomas S. Monson, whose forebears are Swedish.)

Born on July 26, 1932, to Charles Horald and Ortencia Hendricks Merrill Monson, the leader was born and raised in Salt Lake City, Utah. As a young man in grade school he learned to play the bass fiddle and played in orchestras led by Dr. Frank Asper, then Tabernacle Choir organist.

He attended the University of Utah, where he earned a bachelor’s degree in architecture and met Donna Mae Hill. The couple was married on March 19, 1954, in the Salt Lake Temple. They are the parents of five children and have 17 grandchildren and six great-grandchildren. His wife preceded him in death in August of 2013.

The couple spent their first year of marriage living at the Presidio in San Francisco, California, as Elder Monson served in the U.S. Army from 1953 to 1955. After his time in the military, he went on to earn a master’s degree in structural engineering from Iowa State University.

In his career, he worked as a consulting engineer with a Salt Lake firm and then went to work for the LDS Church for 35 years. He began as a consulting structural engineer, and in the late 1960s he was asked to organize the operations and maintenance program of the LDS Church. In 1982, after the Church’s architect retired, he was asked to head a new temple and special projects division.

In that position he oversaw temple construction and design under the direction of the First Presidency. At that time, then-President Spencer W. Kimball was starting to announce six or seven new temples a year.

Upon his call to serve as a General Authority Seventy, Elder Monson said in an Ensign magazine article, “My wife and I have had many blessings and wonderful people come into our lives. We share the feeling that any chance to further the work and tell people of the Savior is very exciting and is a way to show our gratitude to Him.”

A funeral is scheduled for Monday, May 22, at 11:00 a.m. at the River Ridge 10th Ward meetinghouse located at 1409 West Shields Lane in South Jordan, Utah.