Elder Cook’s Recent Visit to England was “Reflective” and “Precious”

Elder Quentin L. Cook began his service as a full-time missionary in South West England in September of 1960—walking the cobblestone streets of Gloucester, Cheltenham, and Swindon, viewing centuries-old architecture and scenic views of the River Severn, and thinking of his own English roots.

The Church of Jesus Christ of Latter-day Saints had just dropped the age of missionary service for young men from 20 to 19, and Elder Cook—a Cache Valley, Utah, native—was one of the last 20-year-old missionaries.

The Church had a very small branch in Gloucester, where members met with Latter-day Saints from Cheltenham. As the months passed, Elder Cook, with his companion, would also open the Swindon area for missionaries to proselyte.

Now a member of the Quorum of the Twelve Apostles, Elder Cook returned to the area on October 20. The branches that the young missionary helped build almost six decades ago have grown into wards and the Cheltenham England Stake.

“There was just enormous emotion to see that,” he said. “It is hard to have a vision of what the effort of individual missionaries means over a long period of time, each working very hard with the help of the members. It flowers into what we have today.”

Traveling with his wife, Sister Mary Cook, Elder Cook presided over the Cheltenham stake conference—marking his first assignment in the area since his time there as a full-time missionary.

For Elder Cook, the trip was reflective; he thought of his service and the people he met, many who have now passed away. “It was very precious,” he said.

During his recent assignment in England, Elder Cook also spoke during a devotional at the J. Reuben Clark Law Society United Kingdom and Ireland Chapter meeting; offered a keynote address at Pembroke College at the University of Oxford; met with missionaries in the England London Mission; attended a reception as part of RootsTech London; and met with three members of Parliament.

Elder Cook’s return to England, where he labored as a humble missionary known to very few, was also a symbol of the growth and influence of the gospel of  Jesus Christ. For example, the meeting in Parliament with Stephen Kerr MP, David Rutley MP, and Craig Whittaker MP occurred just hours before a historic vote on Brexit—the term used to refer to the United Kingdom’s decision to leave the European Union. And Elder Cook ended his trip by attending the VIPs dinner of the Church’s RootsTech London family history and technology convention, held in the London ExCel Convention Center and attended by almost 5,000 participants and another 5,000 Latter-day Saints.

Speaking during the missionary meeting, Elder Cook shared the profound influence in his life of his service in the British Isles—where his great-great-grandfather Heber C. Kimball was the first Latter-day Saint missionary to serve in Britain in 1837. It was as a missionary that Elder Cook first visited Parliament, where he resolved to study law, and when he first met a living prophet. President David O. McKay traveled to London to dedicate the Hyde Park Chapel in 1961. Elder Cook was not assigned to that event but saw President McKay when he visited his mother’s home a few days later in Wales.

He also had no way of knowing then that his junior companion Elder Jeffrey R. Holland would one day serve with him as his senior member of the Quorum the Twelve Apostles. “You be nice to your junior companions,” Elder Cook joked with the missionaries. “They may be senior to you someday.”

While in London, Elder Cook also delivered the J. Reuben Clark Law Society UK and Ireland Chapter’s 4th Annual Religious Freedom Lecture. The address was part of an interfaith initiative that also included speakers from the Muslim and Catholic faiths. 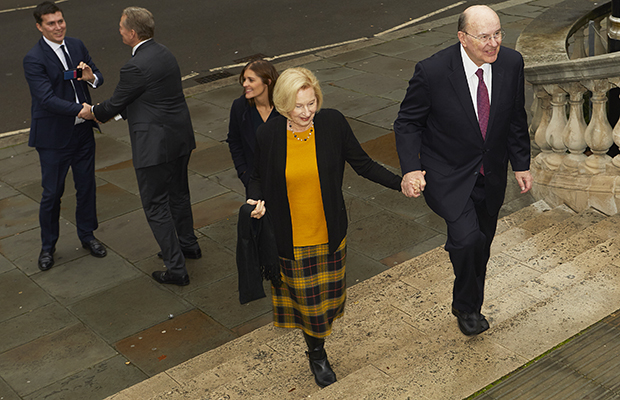 Charlotte Steinfeld, chapter chair of the law society, said at the conclusion of his address, Elder Cook spent 35 minutes answering the questions of the lawyers in the room.

“One question centered on balance in life, and Elder Cook gave some valuable principles to the members,” she said. “In particular, he noted one should put in an honest effort for one’s clients but should also be sure not to neglect one’s family.”

Steinfeld said one litigator from the North of England reported on how much he enjoyed the meeting with Elder Cook, calling it “really uplifting.”

“It was a great blessing to have Elder Cook give so graciously of his time to members here in the UK,” she said.

A highlight of Elder Cook’s return to England was his address at Oxford’s Pembroke College. 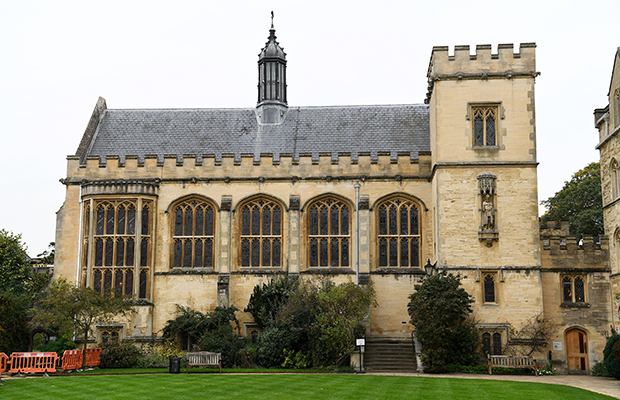 Dr. Nicholas Cole, director of the Quill Project and senior research fellow at Pembroke College, Oxford, organized the interdisciplinary panel to discuss both the history of religious liberty and some contemporary legal issues being considered by American courts. The panel brought together Elder Cook; Rodney Smith, UVU Center for Constitutional Studies; and Stephanie Barclay of BYU Law School; who addressed the long history of religious freedom and its importance. Also on the panel were Dr. Dominic Burbidge, a research director at the University of Oxford, and the Reverend D. Andrew Teal, Pembroke College chaplin.

“Elder Cook’s ability to speak to the long struggle for religious freedom in America made an excellent keynote for the panel that bridged the historical and contemporary themes, and we were extremely honored that he was able to find time to join the discussion,” said Cole.

Elder Cook’s remarks, he added, “were especially powerful in reminding the audience of the need to allow political questions to be framed and debated in moral terms. . . .

“How to secure meaningful and just liberty of conscience for those of all religions and of none remains a contested issue, and our panel at Oxford was one small part of an important and enduring conversation that will continue to involve theologians, lawyers, philosophers, and historians.” 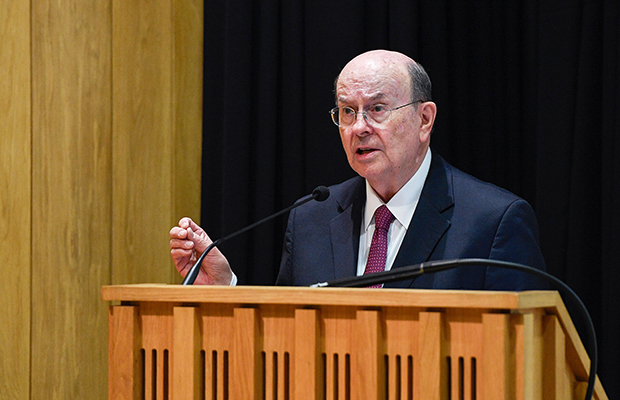 Elder Quentin L. Cook of the Quorum of the Twelve Apostles addresses students, faculty, staff, and guests at the Pembroke College at the University of Oxford in Oxford, England, on October 23, 2019.

After his address, Elder Cook participated in a dinner held at Milner Hall in the Rhodes House. The hall, reminiscent of a scene that could have taken place at the Hogwarts Great Hall in the fictional world of Harry Potter, reminded Elder Cook once again of his connection to England and his love for the land and the people there.

Bringing his English experience full circle, Elder Cook posed for an iconic photograph with the current missionaries in London on the steps of Royal Albert Hall—a concert hall in South Kensington that has become known as one of England’s most distinctive buildings.

“It was very, very precious to have that experience,” he said. 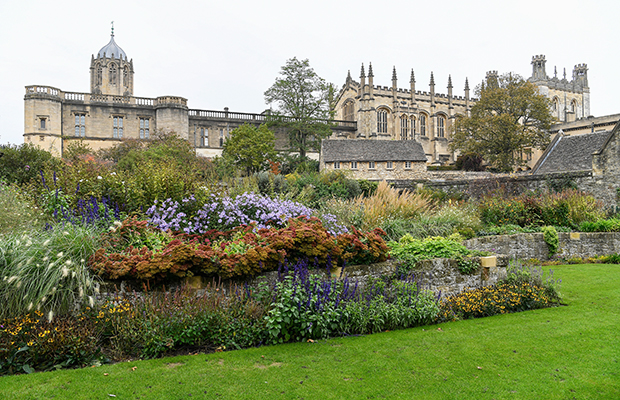