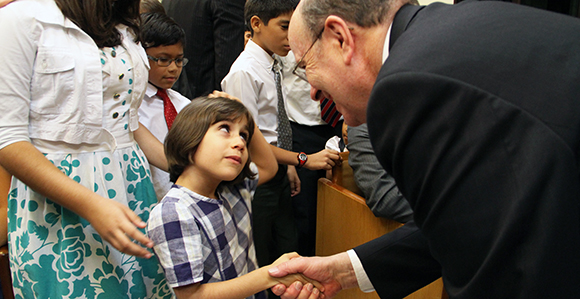 Elder Quentin L. Cook of the Quorum of the Twelve Apostles greets a young Brazilian girl during an assignment February 19 through March 2 to Manaus and Belem, Brazil, where he conducted priesthood leadership conferences, missionary and member meetings, young single adult devotionals, and stake conferences.

“What is really impressive is that in almost every area—from missionary work to sacrament meeting attendance to endowed members holding a current temple recommend—the work is progressing very well.” —Elder Quentin L. Cook of the Quorum of the Twelve

The gospel is thriving in the Amazon rain forest, said Elder Quentin L. Cook of the Quorum of the Twelve Apostles.

Elder Cook—who was accompanied on the trip by his wife, Sister Mary G. Cook, and members of the Brazil Area Presidency, Elder Claudio R. M. Costa and his wife, Margareth, and Elder Marcos A. Aidukaitis and his wife, Luisa—called northern Brazil “an amazing part of the world” that contains one-eighth of the world’s fresh water and 20 percent of the world’s oxygen.

Church work began in the Amazon River Basin—once the hub of the world’s rubber industry—in 1967; the first Latter-day Saint congregation was organized in 1978. Members asked the Area Presidency to send them missionaries, paid to fly elders from southern cities to Manaus, gave the missionaries free board and room, and found people for them to teach. Missionaries from the Brazil Rio de Janeiro Mission and then the Brazil Brasilia Mission found success in Manaus.

Elder Costa of the Seventy and President of the Church’s Brazil Area served as the president of the Manaus Mission when it opened in 1990. At that time there was just one LDS stake and one district in the Amazon region of Brazil.

But the work quickly took hold in Manaus—an isolated city of 2.2 million people accessible only by boat or plane—and in Belem—a city of 1.9 million almost surrounded by water.

Elder Cook said in addition to growth, the area also has strong leaders—both in terms of living the gospel and in terms of education and occupation.

Elder Cook said in order to help all members in Brazil become self-sufficient, returned missionaries from the area are being mentored by priesthood leaders. “These mentors help give the missionary a short and longer-term vision of education and work opportunities,” he said.

The legacy of temple work that began in 1992 when the first group of Latter-day Saints made the long journey down the Amazon River to the São Paulo Brazil Temple—selling much of what they owned to pay for the trip—continues today, Elder Cook said.

“What is really impressive is that in almost every area—from missionary work to sacrament meeting attendance to endowed members holding a current temple recommend—the work is progressing very well,” he said.

The success of the area was foretold years earlier. On June 5, 1961, in a meeting in Rio de Janeiro, William Grant Bangerter, the mission president who would later serve as a General Authority, spoke about the facilities the Church was renting in Brazil. President Bangerter promised the missionaries that they would live to see the time when there would be hundreds of wards and stakes meeting in Church buildings, not rented houses, and tens of thousands of members, Elder Cook said. “He said there would be many temples—even one in Manaus.” 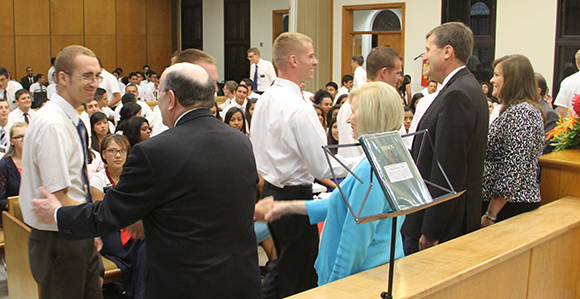 Elder Quentin L. Cook and his wife, Mary, and Elder Marcos A. Aidukaitis of the Brazil Area Presidency and his wife, Luisa, greet members during an assignment February 19 through March 2 to Manaus and Belem, Brazil.