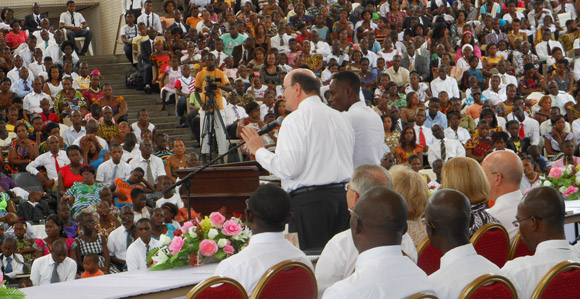 Elder Quentin L. Cook of the Quorum of the Twelve, at right, speaks to thousands gathered in Abidjan, Ivory Coast—a West African nation still recovering from an armed conflict during 2010 and 2011.

“We traveled for 12 hours, but I am happy.” —Sister Virginie Oulai Tongo

Elder Quentin L. Cook of the Quorum of the Twelve traveled to Abidjan, Ivory Coast, on February 8–11—visiting the West African nation still recovering from an armed conflict that embroiled the country during 2010 and 2011.

During the visit he presided at a priesthood leadership conference, held a special meeting with members and investigators, and visited key government officials.

“As we heard from our bishop that Elder Quentin L. Cook will visit Ivory Coast, we were so grateful to the Lord that an Apostle of God comes to our land,” said Dorothée Anzoua of the Plateaux 2nd Ward, Cocody Ivory Coast Stake, noting how much his visit meant to Church members. “We told our children of the importance of an Apostle and that he is a special messenger from Jesus Christ. Every day our four children prayed for the success of this special conference and for guidance of the Holy Ghost to be prepared for the great message of His servant.”

Conducting both the priesthood leadership conference and the member and investigator meeting was Elder Norbert K. Ounleu, an Area Seventy who lives in Abidjan.

The member and investigator attendance at the special conference was impressive—4,467 came to the first session and 5,226 to second, for a total attendance of 9,693. Of this number, 619 are not yet members of the Church, showing something of the missionary spirit of the 19,000 Church members in Ivory Coast.

Though impressive, the numbers alone do not say as much about what this weekend meant to the members as their fervent prayers, spiritual preparation, and sacrifice did.

Virginie Oulai Tongo of the Meagui Branch, 300 kilometers (205 miles) from Abidjan, said her family saved their money to come and see an Apostle. “We traveled for 12 hours, but I am happy,” she said.

Eugene Engmann, recorder of the Accra Ghana Temple, spoke about the intensity of the Ivorian Saints’ devotion to the gospel. Few countries have endured the devastation that has befallen Ivory Coast in recent years. The worldwide economic crisis of the mid-1980s hit this country especially hard. This was followed by conflicts, a military coup, rebellions, and two civil wars that subjected the people to terrible deprivation and suffering. “What they passed through,” said Brother Engmann, “prepared them to recognize that their only hope lies in the gospel and that it is the greatest blessing they will have in this life.”

Many who attended the conference reported on the remarkable richness of the Spirit they enjoyed. Bishop Leon Kouadio of the Dokui Ward, Cocody Stake, said, “I strongly know that we had the presence of a distinguished servant of our Savior among us. I had tears in my eyes when he ended his message by all the blessings he spoke upon us, our wives, our children, our work, and our country.”

A member of another faith who manages the VIP room at the Cultural Palace, where the conference was held, said, “I’ve been working [here] for 10 years, where I attended the meetings of so many churches. This is the first time I feel the Spirit. This is the first [time] an Apostle talks to me. My children and I will join this church very soon.”

Elder Cook said Church leaders were “surprised by the dramatic turnout and very impressed by the exceptional spirit that was present in the meeting.”

Elder Clayton said he was equally impressed with the spirit that was present and expressed appreciation for the growth of the Church and the commitment of the members.

In 1984 there was only one family of Church members that had permanent residence in Ivory Coast. That year, a member couple in Germany—Philippe Assard and his wife, Annelies—were impressed to leave the comfortable life they were living there and return to Brother Assard’s Ivory Coast homeland to help the Church get started there.

The seeds they planted have already yielded much fruit. Elder Marvin J. Ashton of the Twelve traveled to Ivory Coast in 1987 and dedicated the land for the preaching of the gospel. The next year the first missionaries arrived. The first stake was organized in 1997. Now there are five stakes.

In recent years the Ivorian Saints’ faithfulness has been particularly manifest in their family history and temple work. Three of the five Ivory Coast stakes are among the top 25 in the Church in the percentage of adults who submitted family names for temple ordinances during 2012. Of all stakes in the Church, the Cocody Stake has the highest percentage of adults who have, at one time or another, submitted names for temple work.

The youth also are doing their part by participating in the Church’s worldwide records indexing program. The percentage of Ivorian young people doing indexing work is more than twice as high as the Church average, in spite of the fact that virtually none of them have personal access to a computer and the Internet but must go to a stake family history center to do the work.

Brother Assard, who became the first branch president and then the first stake president in Ivory Coast, said that such impressive results are obtained because the stake leadership has consistently taught that family history work is an essential part of living the gospel. The members work to be ready with their family names before they board the bus for the long ride to the Accra Ghana Temple—and typically not with just a few names, but many.

Priesthood leaders who are also set-apart ordinance workers accompany the members from their stake and administer the temple ordinances to them.

Generally each of the five stakes in Ivory Coast makes two temple trips per year, with about 100 Church members each trip. The pattern is for one of the trips to consist mostly of adults with some of their children, while the other is for youth, young single adults, and their leaders.

The youth and young single adult buses travel to the temple when school is out. “They are always very well behaved and hold devotionals and activities they have planned,” said Brother Engmann. “They go home edified and with an increased desire to serve missions and marry in the temple.”

The travel is difficult. Sometimes the buses will break down or other difficulties are encountered. But the Ivorian Saints persist and perform the temple ordinances.

In their talks at the Sunday meeting, Elder Cook and Elder Clayton strongly encouraged the Saints to move forward in four main areas: increasing their faith in the Lord Jesus Christ, strengthening their families, actively sharing the gospel with others, and continuing their incredible family history and temple work efforts.

The Church leaders said they felt the Latter-day Saints in the Ivory Coast—who have a great respect for and appreciation of life—were receptive to their message. “We were particularly impressed with the large number of investigators present,” said Elder Cook. 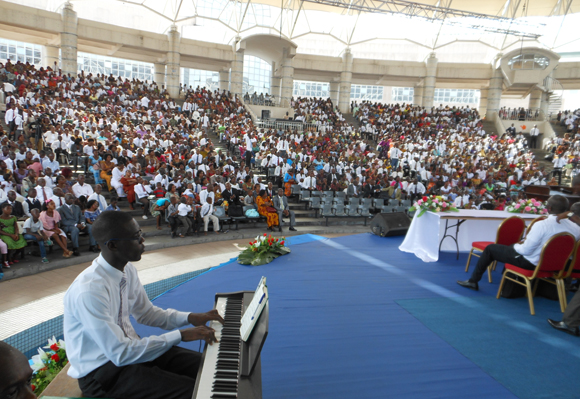 Elder Quentin L. Cook of the Quorum of the Twelve speaks to thousands gathered in Abidjan, Ivory Coast—a West African nation still recovering from an armed conflict during 2010 and 2011.