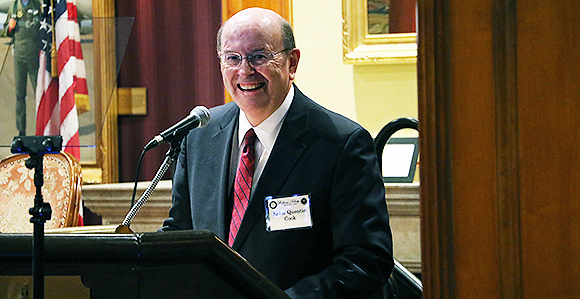 People of faith should raise their voices and “defend divinely inspired freedoms,” said Elder Quentin L. Cook of the Quorum of the Twelve Apostles during a symposium on Religious Liberty and the Law held in Los Angeles on Friday, November 3, 2017. Photo by Sarah Jane Weaver.

“We will not always win every attack that is made on faith and religious liberty, but there should not be a vacuum of positive voices.” —Elder Quentin L. Cook of the Quorum of the Twelve Apostles

All religions should join together to defend faith and religious freedom “in a manner that protects people of diverse faith as well as those of no faith,” said Elder Quentin L. Cook during a symposium on Religious Liberty and the Law held in Los Angeles on November 3.

“We must not only protect our ability to profess our own religion but also protect the right of each religion to administer its own doctrines and laws,” said Elder Cook of the Quorum of the Twelve Apostles.

Opening his remarks, Elder Cook expressed appreciation that LDS Church leaders can join Catholic, Evangelical, and Jewish leaders in the United States in friendship and work on “common issues of mutual concern.”

People of faith, whose values are consistent with Judeo-Christian values, should “work together to improve the moral fabric of our nation and protect religious freedom,” he said.

The legal heritage in the United States echoes back to 1215 England and the Magna Carta—an important precursor to the broad protections of religious freedom, he said. In addition to the Magna Carta, U.S. citizens are the beneficiaries of the concepts and principles established by English Common Law. In 1600, Sir Edward Coke produced the consolidation of the English law in written form. He seized upon the Magna Carta “as the embodiment of good laws.”

Elder Cook said in the American colonies, the Magna Carta was drawn on heavily in both the Declaration of Independence and the First Amendment to the United States Constitution.

“That declaration contains the seminal words ‘all men are created equal, … they are endowed by their Creator with certain unalienable Rights,’” said Elder Cook. “The acknowledgement of God, the Creator of the Universe, as the ultimate giver of essential rights is proclaimed in a magnificent fashion and clearly reflects the cherished beliefs of most people.

“Natural law or even a belief that we are accountable to God is not in fashion in much of the legal world today.”

However, he said, the recognition that individual rights are part of the design of a loving Creator are part of both Catholic and Latter-day Saint theology—as well as the other faiths represented at the symposium.

“It is not government which has the disposition and power to grant these protections and rights─they are derived from our Creator,” explained Elder Cook.

Elder Cook said he was encouraged by a memorandum from the U.S. Office of the Attorney General issued on October 6 of this year. Under the heading “Principles of Religious Liberty,” the memorandum declared that “religious liberty … is enshrined in our Constitution.” Quoting James Madison, the document says that “the free exercise of religion ‘is in its nature an unalienable right’ because the duty owed to one’s Creator ‘is precedent, both in order of time and in degree of obligation, to the claims of Civil Society.’”

People of faith must be at the forefront in protecting religious freedom—a freedom from which many other essential freedoms emanate, he said.

To the religiously diverse audience, Elder Cook said in addition to waging legal and educational defense, those protecting religious freedom “need to win the hearts and minds of the great people of this nation. We cannot do that when we are silent about issues that impact religious liberty.”

Quoting the late Elder Neal A. Maxwell of the Quorum of the Twelve Apostles, Elder Cook said, “With regards to significant challenges we should not allow ‘uncontested slam-dunks.’”

Elder Cook said his daughter, who is a lawyer, read his talk and, with a smile on her face, said, “Do you have to use an athletic analogy? Couldn’t you just simply say, those who love religious liberty should be diligent in defending against those who oppose it?”

In either case, “the voices of people of faith need to be heard and amplified,” he said. “When this is done, it creates a pause in the discourse and allows people to evaluate where they stand on a particular matter. Silence allows the rhythm of negativity to continue uninterrupted and unchallenged. This erodes the confidence of people of faith.”

In the first example, claims against Christianity found in a recently published book were promoted by popular media, not challenged. In the second example, people of faith raised their voice, objecting to the inappropriate religious characterization of a nominee in a Senate hearing. “The result was that a pause was created in the discourse and those who denigrated faith were suddenly on the defense,” said Elder Cook.

When allegations are made that are detrimental and often false to either faith or religious liberty, Elder Cook said, the “members of that faith and their friends of other faiths who feel accountable to God need to defend them in a positive, statesman-like manner. Too many do not make their positive views known when their engagement is sorely needed,” he said.

Some, he continued, are concerned that by speaking up they would be getting ahead of the respective leaders of their faiths. “I would suggest that for people of your capability and training, engagement to defend religious liberty is essential. It can take many forms. It may be as simple as posting something in defense of your faith or the faith of your friends. Please do this on your own volition, understanding that you will not always get things exactly right, but also understanding that the far bigger mistake would be to sit silently by.

“Let me say again, we will not always win every attack that is made on faith and religious liberty, but there should not be a vacuum of positive voices.”

A response should be statesman-like and respectful but, at the same time, firm, he said. “I respectfully suggest that in defending faith and religious freedom against its opponents there should be no ‘uncontested slam-dunks.’”

And while a person should not be overtly aggressive in his response, “we can do a better job of teaching and educating our responsible friends of the essential value of religious liberty and its importance in protecting our shared values,” said Elder Cook.

The inalienable human rights enshrined in the U.S. Constitution are inalienable only insofar as these rights are bestowed by a Divine Creator, he said. “It is the accountability to a Divine Creator that is the foundation for assisting those in need, respecting fellow citizens, and respecting and following the law. To the extent these human rights are merely the creation of man, they are at risk of becoming alienable, or being removed by man. To this end, religious liberty is foundational to all other human rights.”

Elder Cook said it is in the best interest of anyone concerned with human rights, even atheists and nonbelievers, to protect religious liberty. “We can and must do a better job of communicating our shared mutual interests.”

Concluding, he said those who feel accountable to God “have a responsibility to live upright lives of service to God and our fellowmen, to obey the law, and to be good citizens, neighbors, and friends in all we do.

“As we do so, ordinary citizens and government officials alike will be more inclined to see the value of religion and to respect the basic principles that allow us to freely live it.”

There is no better demonstration of the great benefits associated with religious liberty than for devoted members of various faiths who feel accountable to God to model principles of integrity, morality, service, and love, concluded Elder Cook. “As others see the goodness of individuals and families—goodness that is founded in strong faith and character—they will be much more likely to speak up in defense of the religious freedoms that allow us to be who we are.”

Kenneth W. Starr, former solicitor general and U.S. Circuit Judge, said Elder Cook “powerfully and eloquently” took the audience back to 1215 England and the Magna Carta and then forward to the founding of America. Elder Cook “called on us to stand up and be heard.”

Judge Starr, who also offered a keynote address at the symposium, said he was impressed that Elder Cook cited the current illustration of a recent confirmation controversy and noted that “because voices were heard, there was a pause.”

“It was a beautiful and important message” shared while addressing “one of the fundamental issues of our time,” he said.

Hannah Smith, senior counsel of the Becket Fund for Religious Liberty and a panelist, said the conference was an “interfaith collaborative effort” by both the St. Thomas More Society and the J. Reuben Clark Law Society to “teach their members why religious freedom is so important and what they can do to defend it.”

“Elder Cook’s talk,” she added, “is an eloquent call to action for members of the Church to be more involved in the defense of religious liberty.”