“I believe that this nation can prosper, and the temple and the influence of the Latter-day Saints will have an effect in the country.” —Elder D. Todd Christofferson

Anytime Elder D. Todd Christofferson gathers with the Quorum of the Twelve Apostles, he sits just a seat or two away from a flesh-and-blood reminder of South America’s temple-building miracle.

When Elder Christofferson’s fellow Apostle Elder Ulisses Soares was serving a full-time mission in his native Brazil, he did so without ever having set foot in a temple until the final weeks of his service. For young Elder Soares and legions of other faithful South American Latter-day Saints, worshipping in a dedicated temple was not an option. It was the stuff of hope and dreams.

“And that,” noted Elder Christofferson, “wasn’t that many years ago.”

The continent’s first temple, the São Paulo Brazil Temple, was opened in 1978—the first chapter in an ongoing period of prolific temple building.

Today, there are 20 temples in operation across the continent—from Barranquilla, Colombia, in the north to Concepción, Chile, to the south. Ten more future temples in South America are under construction or have been announced.

Asunción is counted among the Church’s many South American “temple cities.”

Almost 18 years ago, President Gordon B. Hinckley dedicated Paraguay’s only temple. Unlike Elder Soares, most of Paraguay’s future missionaries have had years of access to a temple—allowing them to serve, learn, and grow.

But the past two years have also presented Latter-day Saints here with a challenging period of being without an easily accessible temple. In 2017, the Asunción Paraguay Temple was closed for significant repair work and renovation.

Following a successful public open house, Sunday, November 3, marked a day of celebration and sacred renewal across Paraguay. Elder Christofferson rededicated the Asunción temple in the Spanish language he learned as a young missionary decades earlier.

His apostolic presence and counsel enriched Sunday’s joyful reopening of the beloved edifice located on the historically prominent intersection of Avenida España and Avenida Brasilia.

“This temple,” said Asunción Latter-day Saint Arami Paredes, “has been a refuge from the world for me since my childhood.” 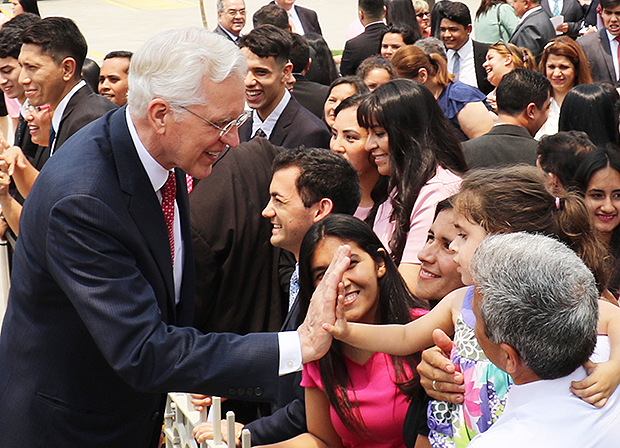 An Apostle’s Return to Sacred Ground

Young Todd Christofferson left his home in the United States in 1964 to fulfill a mission call to Argentina. Working under the presiding direction of his mission president and apostolic predecessor, Richard G. Scott, Elder Christofferson honed a love for South America that’s never left him.

On Sunday, it was impossible to catch him without a smile as he greeted old friends and new acquaintances alike. His Spanish still flows easily thanks to years of ecclesiastical duty across Latin America.

A section of the Asunción Paraguay Temple district takes in some of the northeast province of Corrientes, where he labored as a missionary and honed appreciation for the indigenous Guarani culture and the region’s colonial and postcolonial history.

Serving a mission in southern South America “was obviously a formative time in my life,” he told the Church News. “But it’s nice to reflect back on those moments and then think of where we are now.”

Sunday marked the first time Elder Christofferson had presided at a temple dedication or rededication. So being in South America seemed an apt place to fulfill such a momentous assignment.

“It’s hard to put into words the feelings that one has coming back to where he or she served a mission and then seeing the Church’s development in the meantime—along with the promise of what’s yet to come.”

Elder Christofferson acknowledged the powerful personal symbolism of Sunday’s rededication. Temples, like people, are physical structures that age and require improvements and change. Sometimes there needs to be a rededication.

“And that’s not a bad thing—it gives us an opportunity to do the same for ourselves in our own lives,” he said.

In ancient times, people brought offerings to the temple. Following Christ’s Atonement and Resurrection, the Savior declared an end to such sacrifices. Instead, said Elder Christofferson, people who come to the Asunción temple or other such holy edifices must offer “a broken heart and a contrite spirit.”

That comes only through repentance, personal progress, and covenant-keeping.

Before entering the temple, one can ask, “What can I do in my life that would make me a more worthy offering. . . . What would make me a holier person?” said Elder Christofferson. “If you examine your life, there may be things that are unworthy that need to be put out of your life. Or perhaps there are Christlike attributes that you want to incorporate more fully into your life.

“Those are the kinds of offerings we need to think about. Our gift to the Lord is ourselves, as we come to the temple each time.”

During his tenure as Church President, Russell M. Nelson has anchored instruction on the role each Latter-day Saint has to gather Israel.

Temples such as the rededicated Asunción Paraguay Temple are crowning and “central elements of the promised gathering that the Lord has talked about for so long, through His prophets,” said Elder Christofferson.

The covenants made in the temple, he added, allow for the gathering of both the living and the dead.

“We know what a special place this is,” she said. “Everything in this building teaches how much the Lord loves His children. He wants to bless them as they make covenants to serve Him.“

The Asunción temple, she noted, is not a big building. “But it’s still the house of the Lord. It is very special, and everyone who enters knows that.” 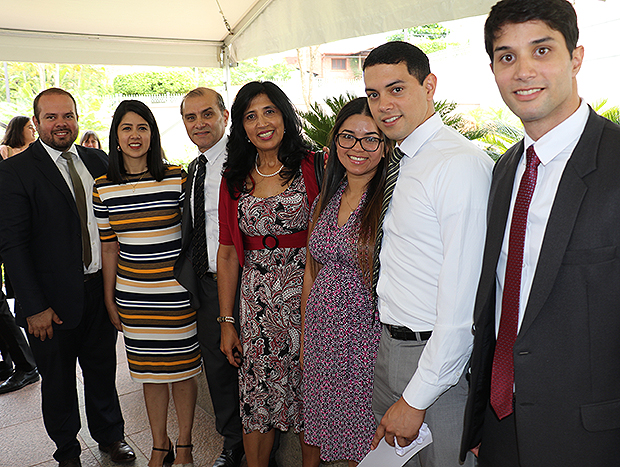 The Maluff-Cañete family are emblematic of the multigenerational Latter-day Saint families found in Paraguay. Photo by Jason Swensen.

Because of its locale near the center of the continent, Paraguay is aptly dubbed the “Corazón de America”—or heart of America. But Latter-day Saints here say the nickname stretches beyond geography. It’s also a land of spiritually sensitive people who experience the gospel in their hearts.

The first two Latter-day Saint congregations in Paraguay were organized in 1951, just two years after the arrival of the missionaries. Since those early days, the combined efforts of full-time missionaries and dedicated local members have allowed for steady growth.

Almost 95,000 members are found today in this landlocked country. The capstone outside immortalizes the opening of the Asunción Paraguay Temple in 2002. Now the year 2019 can be added to the key Latter-day Saint years here.

Sunday’s rededication followed a public open house that welcomed some 20,000 people to the temple.

“During the open house, many members which had not previously entered the temple were allowed to visit and have expressed their testimonies of the temple,” said Asunción Paraguay Stake President Horst Eschgfaller. “We have seen members strengthen their testimonies in relation to the temple and the work. They are looking forward to performing their own ordinances. We've also had a lot of interest and questions from people who are not members of our church.” 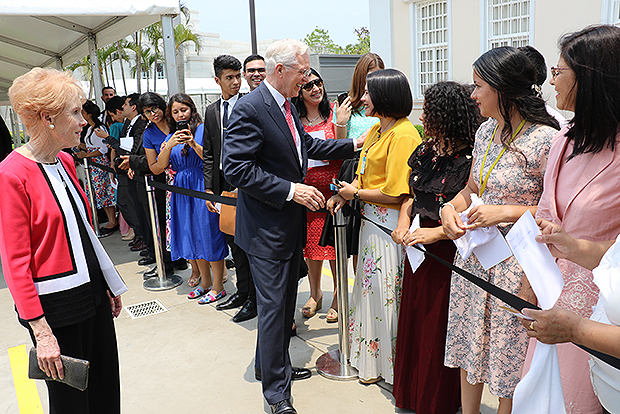 “The spirit of Elijah is so strong right now with the dedication of the temple,” he said. “Our missionaries have shared experiences in which the people they are teaching are being influenced by ancestors from the other side of the veil.

“Now, with a dedicated temple, we anticipate that our recent converts will be further strengthened by the ability to go to the temple shortly after their baptism to do the work for their kindred dead.”

Paraguayan members Julio and Arami Paredes served together as tour guides during the open house. They watched as visitors arrived at the temple with preconceived notions about the Church—only to exit a short time later with new understanding and appreciation for the Asunción temple.

“I was very happy to see that other people who are not of our faith could also enjoy the peace and tranquility of this holy place,” said Arami.

Being reconnected with the Asunción temple evokes feelings of spiritual rededication for Julio.

“My wife and I love the gospel, and we strive to follow its teachings,” he said. “We also yearn to be an eternal family, and I know without a doubt that the temple is a fundamental part of this.” 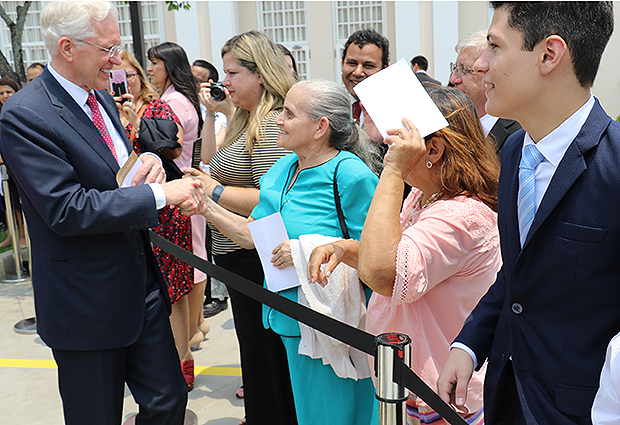 A Refuge for All Paraguayans

The renovated Asunción temple is unmistakably Paraguayan. A stylized version of Paraguay’s national tree and flower—the lapacho—is found throughout the building in decorative paint and color schemes.

The lapacho’s distinctive lavender color is also utilized in the temple’s fabrics, art glass, and stonework. Meanwhile, the furniture style is Spanish Colonial—inspired by the early architecture and furniture of Paraguay.

The design and beauty of the reopened temple—coupled with its family-centered purpose—helped open house visitors such as Elianne Caceres, who is not a Latter-day Saint, discover hope.

As she walked through the Asunción temple’s quiet halls and rooms, “I felt a peace that I have not felt for years,” she said. “I could feel all my problems go away.

“I know that every person has a different way of connecting with Jesus Christ, but I consider the temple of The Church of Jesus Christ of Latter-day Saints to be one of the most perfect and beautiful places to connect with God.” 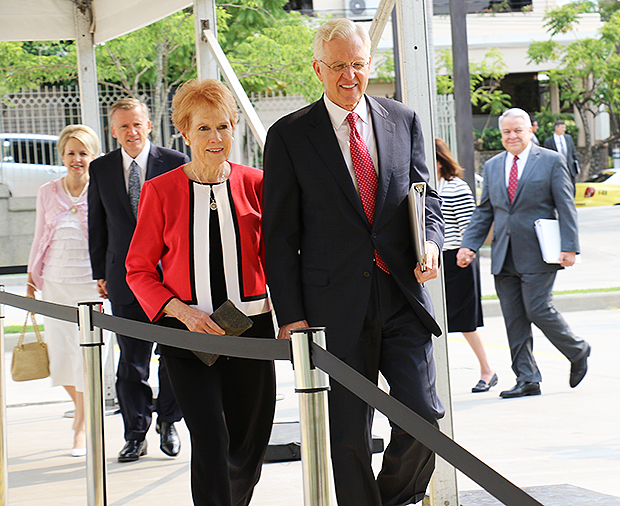 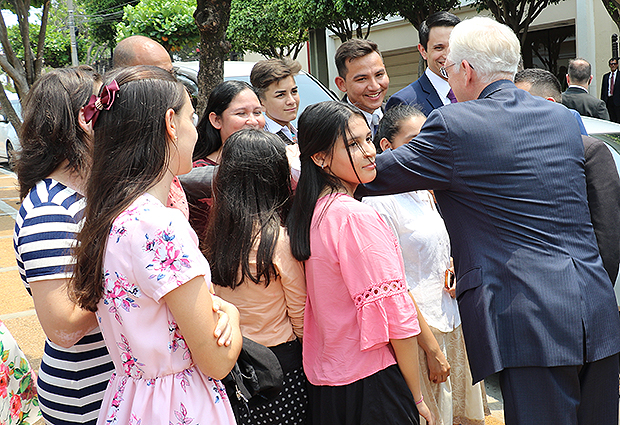 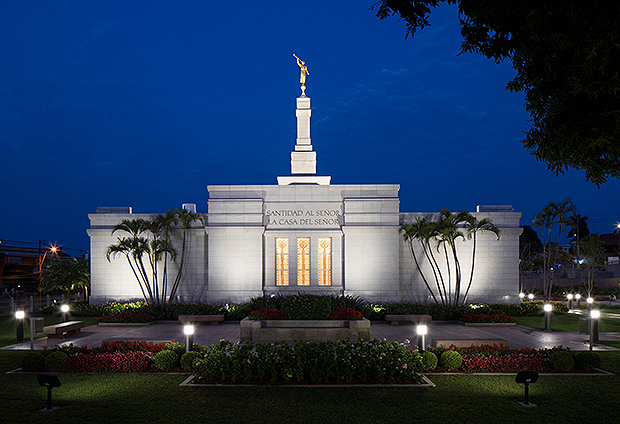 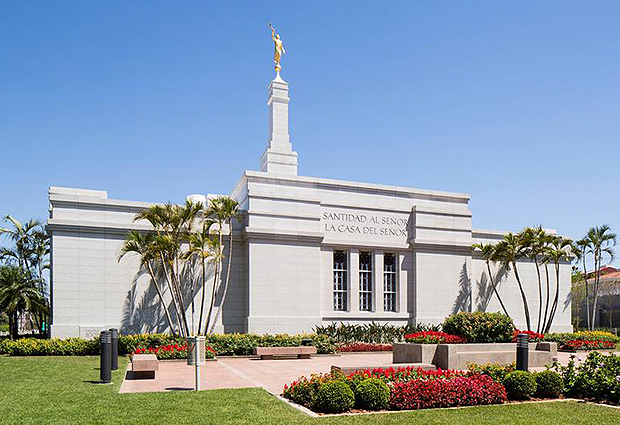 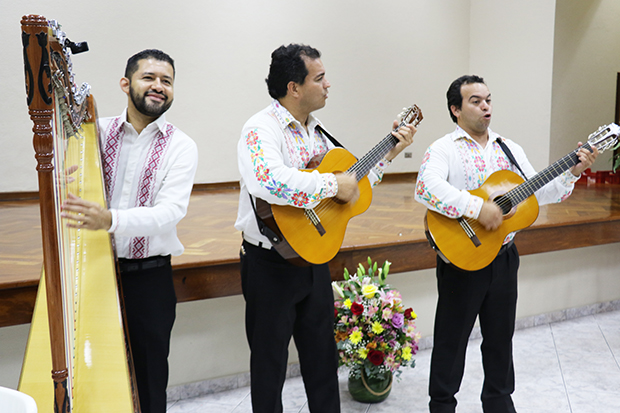 Guarani folk musicians entertained Church leaders on the eve of the November 3, 2019, rededication of the Asunción Paraguay Temple. Photo by Jason Swensen.