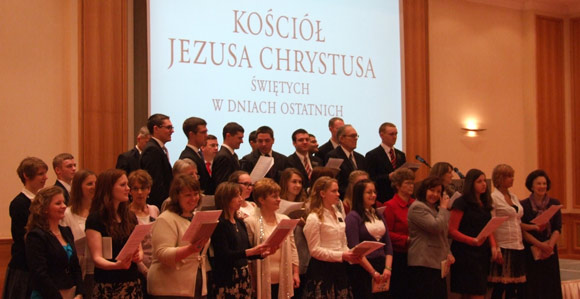 Members of the Warsaw Poland Mission Branch served as the choir at one of the conference meetings during Elder D. Todd Christofferson’s visit to Central Europe from March 3 to 12, 2012. Photograph by Zbigniew Rzeczycki.

“We should get our children acquainted with the holy scriptures—with the language of the scriptures—so that our children may become friends with them. Reading the scriptures with my family is the best thing I [can] do as a father.”—Elder D. Todd Christofferson of the Quorum of the Twelve Apostles

Elder D. Todd Christofferson of the Quorum of the Twelve Apostles visited members, missionaries, and investigators in Austria, the Czech Republic, Germany, Hungary, and Poland during his visit to Central Europe from March 3 to 12, 2012. Also in attendance was Elder Gérald J. Caussé of the Seventy, who serves in the Europe Area Presidency. Both leaders were accompanied by their wives.

Many of those who met with Elder Christofferson traveled 8 to 10 hours to get to their country’s capitals, where the meetings were held.

Many reported that the conference was a revelatory experience for them and that their testimonies were strengthened and renewed. In his messages, Elder Christofferson reinforced basic gospel principles.

At the Saturday session of the conference in Poland, on March 3, Elder Christofferson taught about the gift of the Holy Ghost and encouraged members to strive to receive God’s gifts so that they could better serve their neighbors and receive power to become His servants. Elder Christofferson said: “Pray for spiritual gifts. Ask the Lord to bestow upon you all the gifts that you need for this particular time in your life.”

He also encouraged parents in their efforts to raise their families in the gospel. “We don’t need to be perfect to exert a positive influence on our children,” he said. “…We should get our children acquainted with the holy scriptures—with the language of the scriptures—so that our children may become friends with them.”

He added: “Reading the scriptures with my family is the best thing I [can] do as a father.”

At that same conference, Kathy Christofferson, who accompanied her husband to the conferences throughout central Europe, addressed the sisters during the general session and also during a special meeting for female leaders. She said: “When Christ wanted to feed the 5,000, He had only two fishes and five loaves of bread. Sisters, you are the two fishes and the five loaves of bread. There aren’t very many of you, but your influence is felt widely.” She also shared personal stories and gave encouragement to the sisters who serve the Lord to the best of their abilities but still feel inadequate. “We cannot be everywhere,” she explained.

At the same conference in Poland, Elder Erich W. Kopischke, a member of the First Quorum of the Seventy and president of the Europe Area, and his wife, Christiane, also spoke. Elder Kopishke spoke about his Polish roots and about his father's conversion, which took place in Stettin, Poland, during World War II.

Members in all of the countries that Elder Christofferson visited expressed their gratitude for the opportunity to meet with an Apostle.

Ildikó Kovács from Budapest, Hungary, said: “I was inspired by the talks. My testimony has grown stronger. The testimony of the Apostle touched my heart deeply. It was so simple yet so uplifting, so valid, and so inspiring. I went home with a strong confirmation in my mind and heart that we worship God in the right place: in His Beloved Son’s Church.”

The conference also helped leaders and members understand the nature of their service in the Church. Grzegorz Pawlik, president of the Poland Katowice District, said: “I took a lot of notes as I was listening to Elder Christofferson’s addresses, but a few of his remarks made a special impression on me. They changed the way I approach my current calling in the Church, but not in a challenging sort of way. The new way feels right. I think this kind of experience is possible only when the same Spirit inspires the Lord’s servant to speak and instruct as well as those who listen with the desire to learn God's will.”

Elder Christofferson spoke both to members who had vast experience in the Church as well as to investigators who had known the Church for a short time. Lívia Kutasi from the Kispest Ward in Budapest, Hungary, commented, “He talked about very basic principles that we all … know, but it was good to be reminded of the Atonement, the First Vision, and the Restoration.”

Lívia added: “It is very comforting to know, as Elder Christofferson said, that we are not forgotten. And we are prayed about as well. He came all the way to Europe to share certain messages with us. I was absolutely glad to be one of the listeners in Tihany tér.”

For some of the participant, the conference turned out to be a life-changing experience. Jolanta Szylak from the Wrocław Branch in Poland said she had struggled with her testimony since being baptized a year ago. At the conference, she said, all her doubts washed away. She recounted: “The day I met [Elder Christofferson] was the second most important day of my life, after the day of my baptism. I felt like I was touching heaven.

“The conference dispelled all my doubts. I received answers to my questions and felt assured that I’m in the right place: The Church of Jesus Christ of Latter-day Saints. The people that were there—the missionaries, members of the Church, and its leaders— resembled a beautiful army, the army of God. I feel proud that I was able to be there among them.”

Dorota Musiał, a member of the Warsaw Branch in Poland, said she learned a lot about the priesthood: “Elder Christofferson spoke about the priesthood, and it helped me understand the importance of it. He said to us that men who are worthy to receive the priesthood possess a heavenly power. Even if they are not perfect, they can have it in their hands.”

In all of the countries, the conference provided a special occasion for members from all over to come together. Members who had not been in touch for years were able to gather for the conference and then reconnect with each other between sessions. Tomáš Vít, a counselor in the Prague Czech District presidency, wrote: “Having Elder Christofferson visit us was a joyful experience for our members. It was a unique opportunity for the members of our two districts [in the Czech Republic] to be able to join together with him in a joint district conference and to listen to uplifting words of the Apostle and his wife as well as of those of Elder and Sister Caussé.”