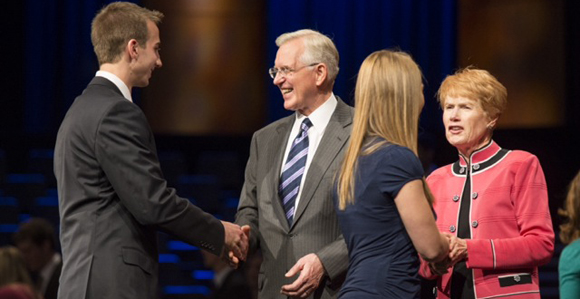 “Insofar as we can, we want to know what [Joseph Smith] knew; we want to understand what he understood; we want to draw near to God as he did.” —Elder D. Todd Christofferson of the Quorum of the Twelve

Joseph Smith is the great latter-day revelator of Jesus Christ, Elder D. Todd Christofferson of the Quorum of the Twelve Apostles taught during a campus devotional at BYU–Idaho on September 24.

“Without his commission from the Father and the Son, without his priesthood ordinations and the keys he received at the hands of duly appointed heavenly messengers, without the fulness of the gospel restored through his visions and revelations and his translations of the Book of Mormon and the Bible, what we would have is something much less than true Christianity.”

Because of his crucial role and many contributions in restoring and building the Church of Jesus Christ on the earth today, many voices have both vocally praised and criticized his life, Elder Christofferson noted.

“It is natural that any who oppose The Church of Jesus Christ of Latter-day Saints—its work, its doctrines, its members—would strike at Joseph Smith,” he said. “We should not be surprised or alarmed or even defensive. The Lord told the Prophet himself not to be surprised.”

It is through studying the revelations and teachings of Joseph Smith that individuals will deepen their faith in Christ and strengthen their testimony of the restored gospel.

“Our study of the Prophet’s life and ministry are more than an intellectual exercise to satisfy curiosity,” he said. “Insofar as we can, we want to know what he knew; we want to understand what he understood; we want to draw near to God as he did. …

“The expanding access we enjoy to the Prophet’s work and teachings fills previous voids in our knowledge, it confirms some things we already knew or thought, and it supplies answers to questions we might have had.”

The information also raises new questions and highlights new areas of inquiry to pursue, Elder Christofferson said, adding that realistically individuals ought not to expect in this life to know all the answers, or even all the questions.

“You know, of course, that as prophesied by Moroni, there are those whose research relating to Joseph Smith is not for the purpose of gaining added light and knowledge but to undermine his character, magnify his flaws, and if possible destroy his influence,” he said. “Their work product can sometimes be jarring, and so can issues raised at times by honest historians and researchers with no ‘axe to grind.’ But I would offer you this advice in your own study: be patient, don’t be superficial, and don’t ignore the Spirit.”

While some answers come quickly or with little effort, others are simply not available for the moment because information or evidence is lacking.

“Don’t suppose, however, that a lack of evidence about something today means that evidence doesn’t exist or that it will not be forthcoming in the future,” he said. “The absence of evidence is not proof. … Where answers are incomplete or lacking altogether, patient study and patient waiting for new information and discoveries to unfold will often be rewarded with understanding.”

Individuals must not form conclusions based on unexamined assertions or incomplete research, or be influenced by insincere seekers, the Apostle taught. Drawing from the words of the Church’s assistant Church historian, Rick Turley, Elder Christofferson said, “Don’t study Church history too little.”

“While some honestly pursue truth and real understanding, others are intent on finding or creating doubts. Their interpretations may come from projecting 21st-century concepts and culture backward onto 19th-century people. If there are differing interpretations possible, they will pick the most negative. They sometimes accuse the Church of hiding something because they only recently found or heard about it—an interesting accusation for a Church that’s publishing 24 volumes of all it can find of Joseph Smith’s papers. They may share their assumptions and speculations with some glee but either can’t or won’t search further to find contradictory information.”

Elder Christofferson encouraged members to be careful not to claim for Joseph Smith perfections that he did not claim for himself. Joseph Smith was a mortal man striving to fulfill an overwhelming, divinely appointed mission against all odds.

“He need not have been superhuman to be the instrument in God’s hands that we know him to be. … The wonder is not that he ever displayed human failings but that he succeeded in his mission. His fruits are both undeniable and incomparable,” he said.

It is important to seek learning both by study and by faith, by not neglecting the Spirit. It is through a witness of the Spirit that individuals are able to have a more “complete understanding.”

“In matters of faith, a spiritual witness is essential if one is to avoid being ‘tossed to and fro, and carried about with every wind of doctrine, by the sleight of men, and cunning craftiness, whereby they lie in wait to deceive,’” he said.

“With a Spirit-derived assurance in place, you can go forward in the Lord’s work and continue deepening your relationship with your Heavenly Father while pursuing or awaiting answers. If you determine to sit still, paralyzed until every question is answered and every whisper of doubt resolved, you will never move because in this life there will always be some issue pending, things yet unexplained.”

Elder Christofferson said that “Joseph Smith’s prophetic calling is key to our religion.” Yet even with his large contributions, he is not the foundation—Jesus Christ is the foundation, and it is His Crucifixion and Resurrection that every other element of God’s plan for the salvation of His children is built upon.

Elder Christofferson shared three ways the Prophet Joseph Smith is the great latter-day revelator of Jesus Christ—his personal witness of the Savor’s Resurrection, his translation and publication of the Book of Mormon, and through sealing his testimony with his own blood.

“Among mortals, the Lord Jesus Christ has had no surer witness, no more committed disciple, no more loyal advocate than Joseph Smith, His prophet, seer, and revelator,” he said. “By his personal witness of the resurrected Savior, by his translation and publication of the Book of Mormon, and by his martyrdom, Joseph Smith has laid before the world the preeminent revelation of Jesus Christ for our time.”