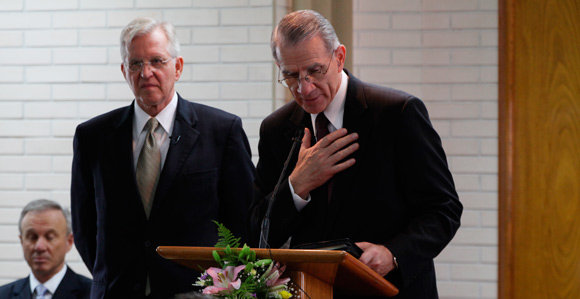 Early in November, Elder D. Todd Christofferson of the Quorum of the Twelve Apostles and Elder Jay E. Jensen of the Presidency of the Seventy met with members, missionaries, and local officials in Resistencia, Argentina.

On November 5, accompanied by his wife, Katherine, Elder Christofferson addressed nearly 200 missionaries of the Resistencia Argentina Mission, where he himself served nearly five decades ago.

Elder Christofferson invited the missionaries to focus on the people, helping them to receive the saving ordinances of the gospel.

“We can be working hard,” he explained, “and yet … not accomplishing what those people need.”

Also in attendance were Elder Jensen and his wife, Lona; Elder Bradley D. Foster, Second Counselor in the Area Presidency; and Elder Juan Carlos Avila of the Seventy, who each bore his or her testimony.

Elder Christofferson and Elder Jensen also met with the mayor of nearby Barranqueras, Alicia Digiuni de Azula, and presented her with a painting of Christ and a copy of the October 2010 special issue of the Liahona, Temples of The Church of Jesus Christ of Latter-day Saints.

She expressed her gratitude for the volunteer service of local Church members and missionaries, who recently participated in a Mormon Helping Hands project, cleaning up garbage and planting flowers. She mentioned that she felt supported by the Church’s efforts to emphasize values, especially in the youth. 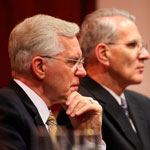 During a public affairs meeting in the province of Chaco, of which Resistencia is the capital, Elder Christofferson and Elder Jensen also presented José Mongeló, Vice Secretary of Government, Religious Affairs and Public Registers, with the special issue of the Liahona and the painting of Christ, as well as a DVD showing some of the Church’s works in Argentina.

Mr. Mongeló thanked the Church for its work in the community and mentioned that the Church is represented in the Interreligious Board organized in Chaco.

Elder Christofferson invited Mr. Mongeló to visit the Buenos Aires Temple during the open house when remodeling is finished next year.

In traveling to nearby Corrientes for a district conference on his way to Buenos Aires, Elder Christofferson reminisced about visiting the city 46 years ago as a missionary and extended the love of President Thomas S. Monson to the members.

After emphasizing basic and fundamental points of progressing in the Church, administering, and serving, Elder Christofferson shook the hands of all who attended the conference.