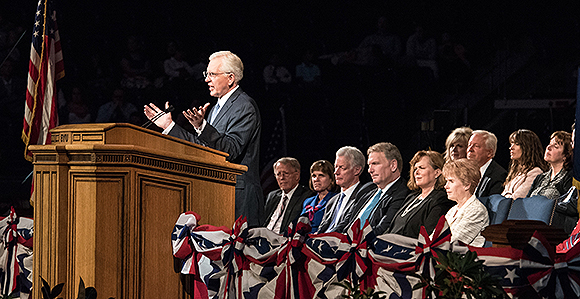 Elder D. Todd Christofferson of the Quorum of the Twelve Apostles gives the keynote speech at the Freedom Festival Patriotic Service in Provo, Utah, Sunday, June 26.

“I am convinced that those who question the value or even the legitimacy of religious freedom do not understand that it is woven into the very soul of America.” —Elder D. Todd Christofferson of the Quorum of the Twelve Apostles

“We live in challenging times. Religious freedom is indeed under fire,” Elder D. Todd Christofferson of the Quorum of the Twelve Apostles said on June 26 in Brigham Young University’s Marriott Center. Elder Christofferson was the keynote speaker at the Freedom Festival Patriotic Service, during which he spoke about America’s heritage of religious liberty and encouraged the audience to “defend that heritage before it is too late.”

“I am convinced,” he said, “that those who question the value or even the legitimacy of religious freedom do not understand that it is woven into the very soul of America.”

He recounted how religion was a leading reason for colonists to leave England for the New World. He also said that the American Revolution “cannot be understood without taking into account the religious teachings that motivated patriots to action.”

Elder Christofferson spoke of the Declaration of Independence and described how it “reminds us that Americans believed they were ‘endowed by their Creator with certain unalienable rights.’ Later, the Constitution would enshrine the first of those unalienable rights—the right to religious freedom.”

Even though religious freedoms are the core of “what America is and what it stands for, critics now openly ask whether religion belongs in American public life at all,” Elder Christofferson said.

He continued by saying that religious freedoms are being attacked by the popular opinion that the freedom of religion only guarantees the right to worship rather than the right to practice one’s faith in daily life and the right to “bring [one’s] beliefs into the public square.” He warned, “There are concerted efforts to shame and intimidate believers who have traditional moral values and to suppress religious viewpoints and practices regarding marriage, family, gender, and sexuality. Worst of all, government sometimes joins in these efforts.” 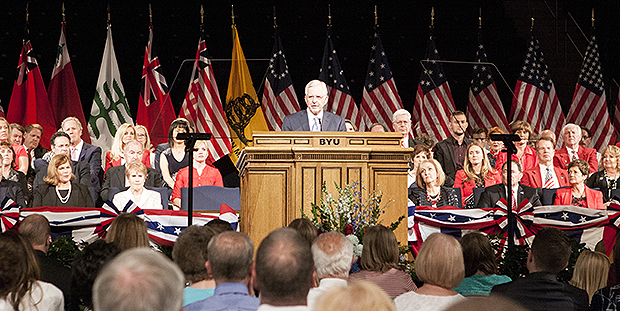 Elder D. Todd Christofferson of the Quorum of the Twelve Apostles gives the keynote speech at the Freedom Festival Patriotic Service in Provo, Utah, Sunday, June 26.

He said, “Religious participation in public life is not only part of American history and a constitutionally protected freedom; it’s also good for our nation.”

He added that religious voices bring unique perspectives to public policy debates. “They recognize corrosive social forces that threaten faith, family, and freedom. … They bring a moral—often cautionary—voice to matters of social and public policy that we desperately need,” he said. 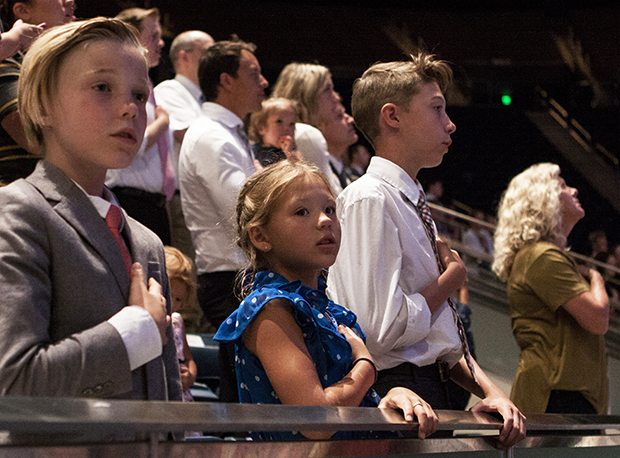 Audience members stand for the national anthem during the Freedom Festival Patriotic Service on June 26.

Elder Christofferson explained that all of the rights in the First Amendment to the Constitution are important to religious freedom and give people the right to speak out “and take a stand for religious freedom.”

He encouraged people of all faiths to be involved in their local civic organizations, to study and be informed, to teach their families about America’s heritage of freedom, to speak up, and to be an “example of the believers, in word, in conversation, in charity, in spirit, in faith, in purity” (1 Timothy 4:12).

He concluded by saying: “Things may get worse before they get better. But these are our times. This is our moment to defend our fundamental freedoms. With courage, conviction, and civility—drawing upon our noble heritage as Americans—each one of us can make a profound difference.” 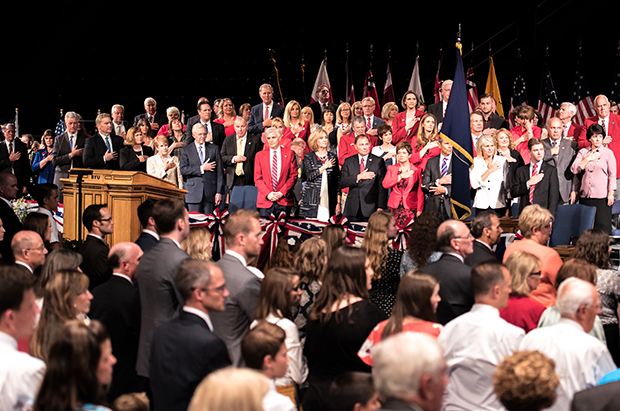 Elder D. Todd Christofferson and his wife, Sister Katherine Jacob Christofferson, stand for the national anthem with civic leaders and other Church leaders during the Freedom Festival Patriotic Service on June 26. 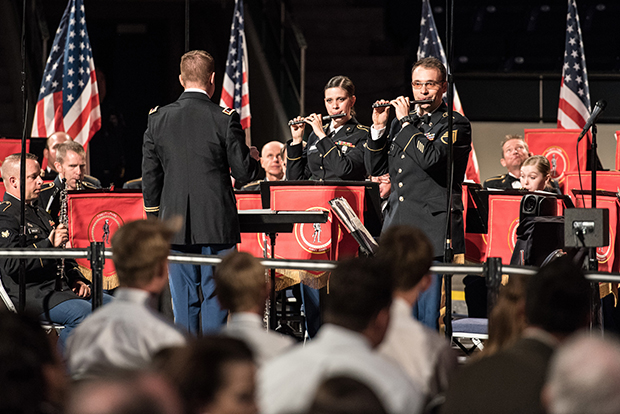