Elder David A. Bednar of the Quorum of the Twelve Apostles and his wife, Susan, pose with senior USAFA cadets and Elder Gordon R. Edgin, LDS designated religious group leader, USAFA, and his wife, Cheryl, on the steps of the Cadet Chapel near Colorado Springs, Colorado, May 29.

Spirits soared high as Elder David A. Bednar from the Quorum of the Twelve Apostles addressed the LDS graduating class of 2016 from the United States Air Force Academy in Colorado Springs on May 29, in the first LDS Baccalaureate Service held in the iconic cadet chapel.

Among the approximately 1,200 people in attendance Sunday at the USAFA cadet chapel were 27 LDS cadets preparing to graduate on June 2. Two of the graduates are recent converts who joined the Church as cadets at the academy, and 22 are returned missionaries.

Elder Gordon R. Edgin, LDS designated religious group leader, who is serving a mission with his wife, Cheryl, at the Air Force Academy, met with chaplains from other faiths at the academy and discussed their various baccalaureate services to be held in the spring. 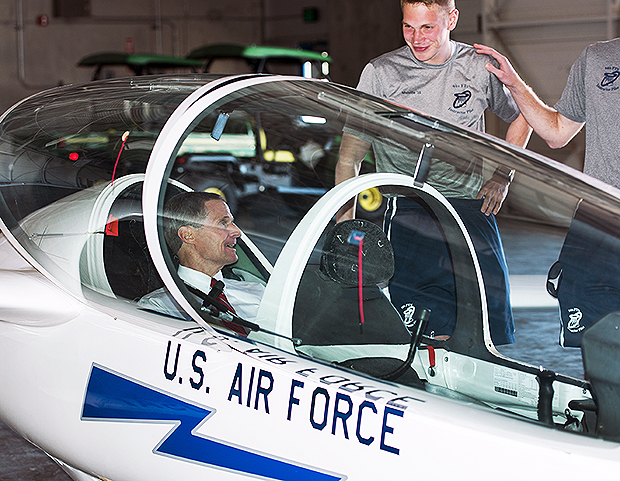 Elder David A. Bednar sits in a USAF glider and talks to glider instructor pilot C1C Mitchell “Mitch” Melville during a tour of the USAFA airfield. Photo by Jacie Stroud.

Elder Edgin thought, “How come we haven’t had an LDS baccalaureate service before?” He said, “It was very, very clear to me. I felt like that was what the Lord wanted us to do.”

So he began the process of putting together a service designed to be a spiritual component in connection with the academic achievement of a graduating class. An invitation was extended from the USAFA superintendent to Church headquarters for a General Authority to preside at the LDS services.

Elder and Sister David A. Bednar met with cadets, toured the campus, and answered many questions during their two-day visit. A recurring question from the cadets was “How do I ensure that I am always on the right path and that I lead others on the right path?”

“Study the Book of Mormon consistently,” Elder Bednar counseled during a luncheon with LDS cadets on Saturday. “Never stop feasting on the words of Christ in all of the scriptures, but especially in the Book of Mormon.” He encouraged the cadets to particularly read the book of Alma. “The chapters describing wars between the Nephites and Lamanites in the Book of Mormon are for you,” he said. “It is not merely about temporal tactics but about facing spiritual battles. Learn the intent of the enemy. Study as a disciple of Christ with the focus of coming to battle against Lucifer and his legions.”

Following the luncheon, Elder and Sister Bednar toured the academy chapel, the Center for Character and Leadership Development, the Aeronautics Laboratory and wind tunnel, and the Cadet Field House. They also met with LDS athletes and members of the rugby team. At the USAF Academy Airfield, the Bednars met members of the parachute team and Elder Bednar was invited to sit in a USAF glider.

Early on Sunday, in a combined sacrament meeting for all members of the three YSA wards in the Colorado Springs area, including about 100 cadets, Elder and Sister Bednar addressed the congregation. Sister Bednar bore testimony of the Savior and the importance of the ordinance of the sacrament. She invited all to draw their hearts near to the Lord by keeping the Sabbath day holy.

Elder Bednar taught about the power and strength that come when members apply the ordinance of the sacrament in their lives to worthily receive, always remember, and honor their covenants.

The baccalaureate ceremony began with Elder Edgin recounting the story of Ted Parsons, an Air Force Academy cadet who, with great faith, accepted a mission call to serve the Lord 39 years ago, relinquishing his commission at the academy. Upon returning from missionary service, Brother Parsons applied for readmission to the academy and surprisingly was accepted. Prior to that time, cadets who left any U.S. service academy were not allowed to reenter and graduate (see June 1982 New Era).

Elder Bednar began his address at the service by praising “the sacrifice of so many who made it possible to enjoy religious freedom and assemble in such a place as the Air Force Academy Cadet Chapel. Memorial Day weekend is an appropriate time for us to reflect, remember, and celebrate. We pay tribute to those who gave everything,” he said. “There is no place Sister Bednar and I would rather be. What a blessing for us.”

In addressing the cadets, he said that the overarching purpose of Heavenly Father’s plan of happiness is to provide opportunities to learn and is divinely designed to facilitate our learning and development. 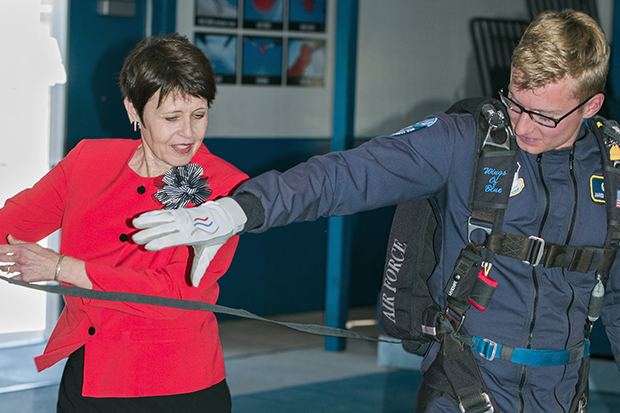 Sister Susan Bednar pulls the rip cord to open the chute of C2C Jared Wesemann, who with his twin brother, Jordan, are members of the USAFA national champion skydiving team, during a demonstration at the USAFA airfield. Photo by Jacie Stroud.

“The glory of God is intelligence,” he said.

“With faith in Christ and trust in His promise, everything works out. If we have faith in the Lord, we have nothing to fear,” he declared.

Elder Bednar also spoke of Captain Moroni from the Book of Mormon, who was put in command of the Nephite armies at age 25. He said Moroni was a strong and mighty man with a perfect understanding, but who did not delight in bloodshed. 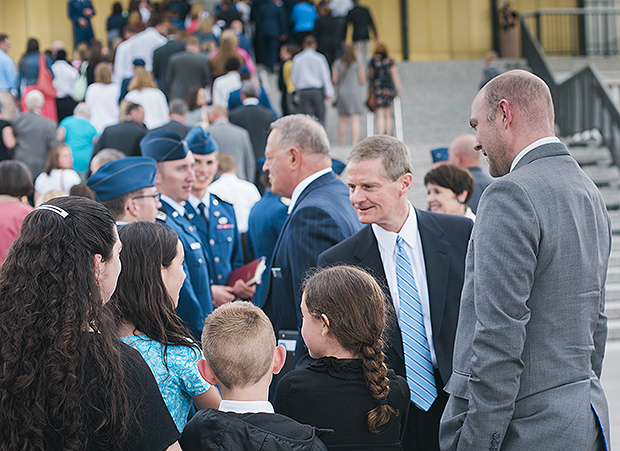 “In keeping the commandments of God, ‘if all men had been, and were, and ever would be, like unto Moroni, the very powers of hell would have been shaken forever’ (Alma 48:17),” Elder Bednar quoted.

“Because of and through the Atonement of Jesus Christ, you can be blessed with the same capabilities as Captain Moroni,” he promised.

“With all the energy of my soul, I love you,” Elder Bednar concluded. Brayden Mickelson, Cadet 1st Class and graduating senior from Nibley, Utah, said that seeing Elder Bednar and listening to his address was “one of the most spiritual experiences of my life.” 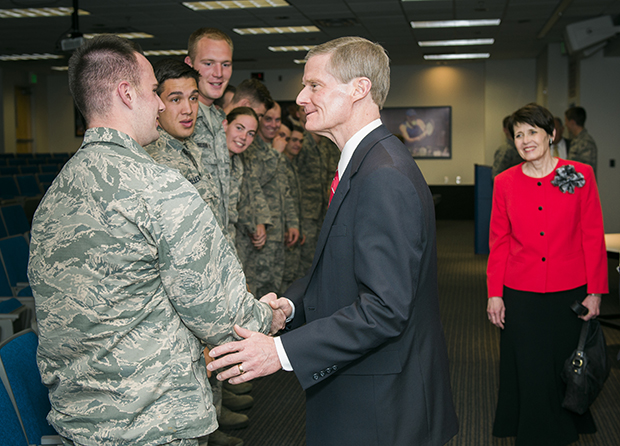 Cadet Mickelson said that he will remember “the confidence that his message gave me to be able to handle all the changes and transitions that will be associated with being an officer in the military.”

Terryn Mills, Cadet 1st Class, from Elizabeth, Colorado, is one of four LDS women graduating from the academy this year. She received a pamphlet in high school and had the distinct impression that she should join the Air Force. “I’m here because Heavenly Father wanted me to be here,” she said.

Cadet Mills said of Elder Bednar’s talk, “The blessing he gave to all of us was just beautiful. ‘Doubt not, fear not’ will not just be words on a page but will become a reality for us.” 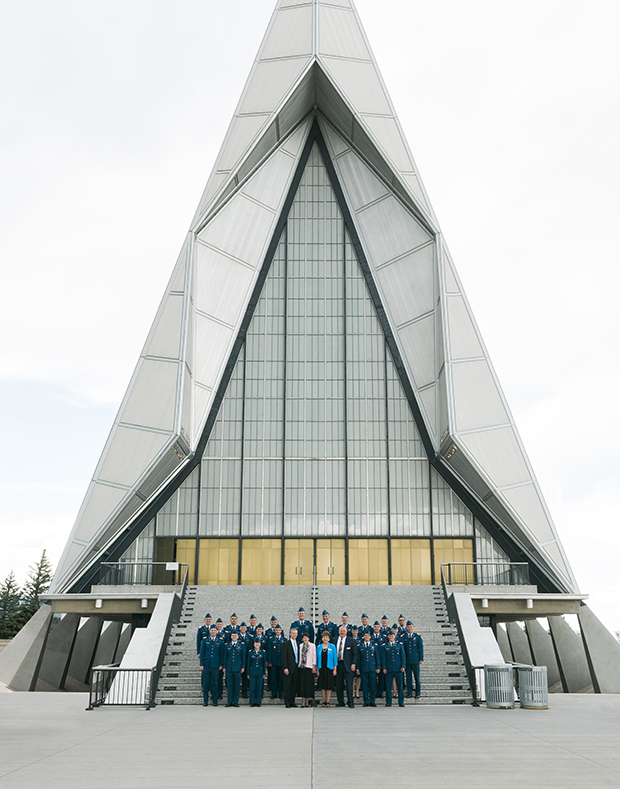 Elder David A. Bednar and his wife, Susan, pose with senior cadets and Elder Gordon R. Edgin, LDS designated religious group leader, USAFA, and his wife, Cheryl, on the steps of the cadet chapel May 29. Photo by Jacie Stroud.

Elder David A. Bednar meets with senior cadets at the United States Air Force Academy near Colorado Springs, Colorado, May 29, where he spoke during the first LDS baccalaureate service. Photo by Jacie Stroud.