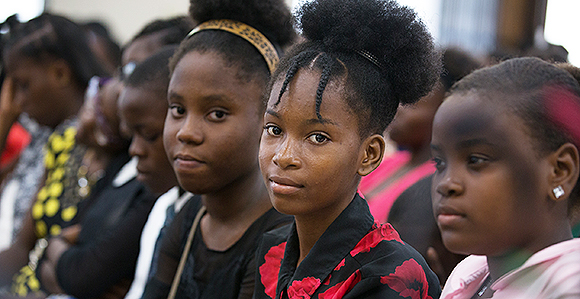 Young women await the arrival of Elder David A. Bednar and other Church leaders for a youth devotional in Port-au-Prince, Haiti, on August 31, 2019.

“The future of Haiti is in this room. The things that you know about the Savior will change your life, your families, and this nation.” —Elder David A. Bednar

On the Saturday before what many Latter-day Saints here are calling the most important day in Haiti’s history, a latter-day Apostle stood in front of hundreds of local youth and expressed a single wish:

“I wish you could see what I see as I look into your faces,” said Elder David A. Bednar at the conclusion of the Saturday, August 31, youth devotional in Port-au-Prince. “The future of Haiti is in this room. The things that you know about the Savior will change your life, your families, and this nation.” And the subsequent Sunday, September 1, dedication of the Port-au-Prince Haiti Temple has already forever changed Haiti—and every young person attending the devotional.

The youth meeting was held on a Saturday afternoon when the capital’s congested streets were noisy with the din of vendors hustling their wares and motorcycles darting through traffic.

But the Port-au-Prince stake center hosting the youth devotional was a spiritual oasis. Many of the young people arrived early in their Sunday best to claim a good seat and perhaps escape the afternoon’s heavy heat. Spending a Saturday afternoon with Elder Bednar and his wife, Sister Susan Bednar—along with the Caribbean Area Presidency and their wives—made for an unforgettable memory in a weekend defined by memories.

“The most important counsel I heard today was about the temple and how we can do baptisms and ordinances for others,” said Bea Dabacel, a young teen from Port-au-Prince. “As a young woman in the Church, I want to teach what I know to others.”

A young Aaronic Priesthood holder added: “I felt the Spirit so strongly today. Today’s devotional has motivated me to take others with me to the temple. As youth, we are the generation of the temple—and we have to take that forward.”

The Bednars also cherished being with the Haitian youth during their first visit to this island nation.

Elder Bednar said if time allowed he would enjoy speaking with each individual young man or young woman in Haiti. That’s, of course, not possible—so instead he and Sister Bednar participated in a question-and-answer session with several youth representing their peers.

The devotional began with a video featuring several Haitian youth sharing their joy in answering Elder Bednar’s invitation to capture “the spirit of Elijah” (2 Kings 2:15) and perform temple work on behalf of their ancestors and others.

Then it was time for the Bednars to sit shoulder to shoulder with several young people in a half circle of chairs set up below the chapel podium. “Please raise your hand if you were able to attend the open house of the temple,” said Sister Bednar. 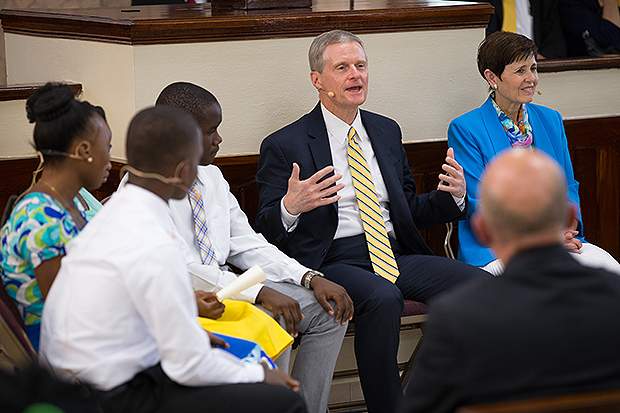 Elder David A. Bednar of the Quorum of the Twelve Apostles and his wife, Sister Susan Bednar, enjoy chatting with teenagers during a youth devotional on August 31, 2019, in Port-au-Prince, Haiti.

Hundreds reached high for the Bednars to see.

“How did the open house make you feel inside?” she asked.

“My testimony of the temple grew during the open house,” said one young man who spoke of visiting the edifice with a friend who is not a Church member.

“So you were able to be a missionary when you went to the open house. . . . That’s wonderful,” said Sister Bednar.

Elder Bednar asked a young man if his first visit to a temple was life changing.

“Yes,” he replied. “It strengthened my faith. Before visiting the temple, I did not like saying that I was a member of the Church. But now I’m proud to say I’m a Latter-day Saint—and I’m proud to bring others to the Church with me.”

Elder Bednar shared his own experience of growing up in Northern California and attending a large high school where he was the only Church member in his graduating class. Sometimes he was even mocked for his beliefs. But he found spiritual fortification by simply looking at the nearby Oakland California Temple and remembering all it represented.

“That experience that I had as a young man—and the experience that you have had in the temple already—make us cousins,” he said, drawing laughter from the youth. Elder Bednar noted the great enthusiasm surrounding the dedication of Haiti’s first temple. But will that enthusiasm continue after the newness disappears? What will the youth do, he asked, to ensure they never take Haiti’s temple for granted or become spiritually lazy?

Hundreds of young people squeeze into a Port-au-Prince, Haiti, stake center for a youth devotional with Elder David A. Bednar on August 31, 2019.

“If our spirit is focused on the temple, we will never be lazy,” answered one boy.

A young woman added it’s also important “to always read the Book of Mormon and strive to strengthen our faith through fasting and prayer.”

In his brief remarks, Elder José L. Alonso, a General Authority Seventy who presides over the Caribbean Area, spoke of the blessing of being with Haiti’s young Latter-day Saints—along with Elder and Sister Bednar.

“Elder Bednar is a member of the Quorum of the Twelve Apostles and a servant of the Lord,” he testified.

The Savior knows each young Haitian’s name, desires, and challenges, he added.

“My invitation to you is to attend the temple frequently. I promise that you will feel His spirit and you will receive personal revelation.” 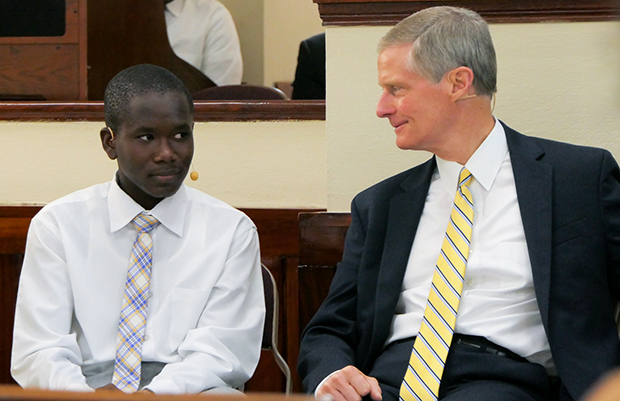 Elder David A. Bednar enjoys a chat with a young man during an August 31, 2019, youth devotional in Port-au-Prince, Haiti.

Sister Bednar testified that the Haiti youth are “filled with light” and are “an amazing asset” to their country.

“The temple,” she added, “has always been a blessing to me. I’ve never been in the temple and not felt the presence of the Lord.”

Then she delighted the Haitian youth by sharing her testimony in French, witnessing of the truthfulness of the gospel and of President Russell M. Nelson’s prophetic calling.

Speaking as he would, perhaps, to a treasured son or daughter, Elder Bednar concluded the devotional by saying he loves every young Haitian gathered inside the stake center and beyond. “I may not know your name, but I know you—just as the other leaders of the Church know who you are as the rising generation.”

Avoid anything, he warned, that would undermine one’s spiritual health and worthiness to serve in the temple. 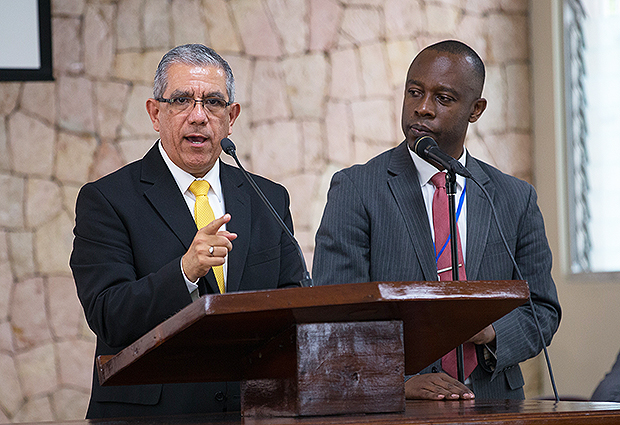 Elder José L. Alonso, a General Authority Seventy and President of the Caribbean Area, shares counsel with teenagers gathered for a youth devotional in Port-au-Prince, Haiti, on August 31, 2019.