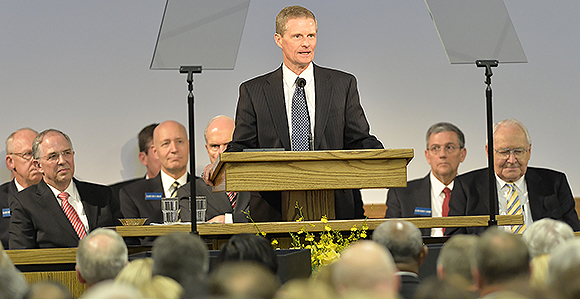 Elder David A. Bednar speaks on the first day of the 2014 Seminar for New Mission Presidents at the Provo MTC June 22.

“Our ultimate goal in any learning and teaching experience should be to determine and use the pattern or patterns that best meet the needs of learners and achieve the desired learning results.” —Elder David A. Bednar of the Quorum of the Twelve

The hastening of the Lord’s work requires His followers continuously to learn, to change, and “to press forward with faith in the Savior.”

That was the counsel Elder David A. Bednar of the Quorum of the Twelve Apostles shared June 25 at the 2014 Seminar for New Mission Presidents at the Provo Utah Missionary Training Center.

The Apostle focused his message on learning and teaching in the Lord’s way. His instruction included a group discussion with several new mission presidents and their wives.

The leaders of the Church, he noted, “have given timely emphasis to the importance of hastening the work of salvation. But I wonder sometimes if we, as servants of the Lord, believe that we primarily and solely must hasten this supernal work.” Faithful and diligent members play a vital role in helping God’s kingdom roll forth across the world, Elder Bednar explained. “But the Lord hastens His work; we do not. First and foremost, we always should remember that this work is the Lord’s work, and He does the hastening.”

Elder Bednar identified two “profound implications” that “grow out of the truth that the Lord directs and moves His work forward”:

• Will we keep pace?

• Will we learn and teach the Savior’s way?

Elder Bednar suggested that members ask themselves if they as individuals and as a Church will choose to keep pace with the Lord’s hastening. “Or will we insist on doing things the way they have always been done, or the ways we are accustomed to or comfortable with?”

Again, he said, each member can choose to learn, repent, change, and teach more effectively in the Savior’s way. “Or will we be so entangled in the traditions and patterns of the past that we will be unable to keep up with the pace of the Lord’s hastening?”

Prior to the seminar, the new mission presidents and their wives were invited to study and prepare for their training lessons. The training group lessons conducted during the seminar were both current and relevant examples of how the Church’s Missionary Department is striving to learn, change, and improve, he added.

“The facilitators and teachers listened more, lectured less, and asked more inspired questions than in previous seminars,” Elder Bednar related. All in attendance were encouraged to share insights and observations.

The training group lessons—with their emphasis on preparation and student participation—served as patterns that can help missionaries become better learners and teachers.

Resources such as Preach My Gospel and the Come, Follow Me youth curriculum have enabled missionaries to become better learners and teachers during a pivotal period of “hastening.” Progress has been made—but additional improvements are needed.

Elder Bednar reminded the mission presidents and their companions that the missionaries will look to them as examples in all things—including matters of teaching and learning.

The Lord’s way—and His work—includes a variety of patterns that can be utilized to achieve different spiritual objectives. Such patterns, he observed, were evident during the seminar. For example, the First Presidency and other Church leaders often delivered focused and inspired messages without interaction from their audience. In contrast, advanced preparation and vigorous interaction were central to many group training lessons.

“Our ultimate goal in any learning and teaching experience should be to determine and use the pattern or patterns that best meet the needs of learners and achieve the desired learning results,” he said.

Inviting the Holy Ghost to be the teacher, he added, is a central purpose in all of the Lord’s patterns for faithful learning and teaching.

“Learning by faith requires both the heart and a willing mind and is the result of the Holy Ghost carrying the power of the word of God both unto and into the heart.”

Elder Bednar then invited three new mission presidents and their wives to join him on the stand for an informal conversation about what they had learned during the seminar. Participants included President Rodolfo C. Franco and Sister Cristina B. Franco, Argentina Resistencia Mission; President Clark D. Ivory and Sister Christine Ivory, Romania/Moldova Mission; and President Wayne E. and Sister Tracy E. Maurer, Philippines Tacloban Mission.

Their conversation was anchored by three basic principles, undergirding the patterns of learning and teaching:

Elder Bednar posed the question “What have you learned about learning in the Lord’s way?”

Sister Ivory responded that because of her diligent preparation before the seminar, she was inspired to also study the Book of Mormon with her 11-year-old son, who will go with them into the mission field. She was prepared to receive “very personalized, individual teaching by the Holy Ghost.”

President Ivory related an experience with their Preach My Gospel tutor, who was sincerely interested in investigators that President and Sister Ivory had recently referred to missionaries to be taught. Their tutor was an example of ministering and caring about people first. “We need to do the same,” President Ivory said.

President Maurer related an observation he made while teaching the teachers quorum. “When I was talking at them, they were sleeping. But when they were teaching each other in the Savior’s way, there was much greater interest among and participation by every student.”

Elder Bednar asked the mission presidents and their wives, “What will you do with what you have learned?”

Sister Maurer responded she had learned “that when inspiration comes, you write it down.” Such diligence and focus assures learning and additional teaching opportunities.

President Franco noted that some of the units that he will preside over in Argentina are struggling with activity. After teaching them through the Spirit, “we’re going to invite the leadership in the different branches and districts to act.”

President Ivory said he had learned key lessons on preparing people to teach. In the coming weeks, he will be meeting with several local priesthood leaders in his mission. He plans to invite them to read and study specific scriptures and other materials prior to their meetings “so that when we gather together, they are ready to be taught—and we are ready to be taught by them.”