During the first part of September, Elder David A. Bednar of the Quorum of the Twelve Apostles met with Saints in England, Germany, and Denmark.

On September 3 and 4, 2011, Elder Bednar addressed missionaries, priesthood leaders, young single adults, and the general membership in several meetings and conferences in the Reading England Stake Center. Elder Bednar was accompanied by his wife, Susan, and by Elder Gérald J. Caussé, a member of the Europe Area Presidency, and his wife, Valérie.

Having served in Munich as a full-time missionary nearly 40 years ago, Elder Bednar was grateful to spend two days meeting with missionaries and members there. He and Sister Bednar were accompanied by Elder Louis Weidmann, an Area Seventy, and his wife, Esther. 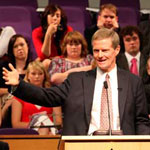 At a member meeting on September 5, Elder Bednar’s instruction focused on the doctrine of the Atonement of Jesus Christ, specifically including the principle of moral agency. “Because faith is a principle of action and power,” Elder Bednar explained, “faith in Christ inspires us to exercise our moral agency in compliance with gospel truth, invites the redeeming and strengthening powers of the Savior’s Atonement into our lives, and enlarges the power within us whereby we are agents unto ourselves.”

This truth is especially relevant as we pray, he said. “If you and I would truly pray and ask in faith, as did Joseph Smith—if we would pray with the expectation to act and get to work on what we already know we should do—then the work of proclaiming the gospel would move forward in a remarkable way,” Elder Bednar counseled.

On September 6, Elder and Sister Bednar met with missionaries in the Frankfurt Germany Mission. In instructing the missionaries, he again emphasized moral agency and helped them understand what it means to be a “Preach My Gospel” missionary.

After traveling that evening to Kaiserslautern, Germany, Elder and Sister Bednar met with members and invited them to ask questions. In response to one question about how to be a good husband, Elder Bednar explained, “It is very important that your relationship with your wife come first before worldly interests. . . . Imagine a triangle with the Savior at the top. You and your spouse are at opposite legs of the triangle. As you each individually come unto Christ, you are drawn closer together. There is no challenge that cannot be overcome together as you come unto Him.”

Returning to Frankfurt on Friday, September 9, Elder Bednar met with the Area Presidency to discuss the challenges and blessings in the Europe Area and ways that Church leaders can be of assistance and support.

On Wednesday, September 7, Elder and Sister Bednar, accompanied by Elder Erich W. Kopischke, Europe Area President, met with missionaries in the Denmark Copenhagen Mission, instructed members in a multistake meeting, and provided counsel to 30 mission presidents and their wives on the final day of the European Mission Presidents’ Seminar.

On September 10 Elder Bednar, Elder Kopischke, and Elder George Donaldson, an Area Seventy, met with missionaries in the England Birmingham Mission. Later that evening they met with priesthood leaders in Birmingham—stake presidencies and bishops of eight stakes. The next day Elder Bednar gave counsel to Saints from the Birmingham, Lichfield, and Coventry stakes at a conference held at a large local convention center.

On Monday, September 12, Elder Bednar met with two Members of the British Parliament before returning to Salt Lake City.

In each Church setting, Elder Bednar taught the doctrine of Christ and emphasized the power of the Atonement in strengthening individuals to be able to do more and become better than they could do or become on their own. He also continued to teach the principle of moral agency and our individual responsibility to act. “Moral agency is the power and capacity of independent action,” he said. “And as we act appropriately and in accordance with the teachings of Jesus Christ, our very natures are changed through His Atonement and by the power of the Holy Ghost.”

At the end of the trip, Elder Bednar reflected on the similarity between members’ concerns throughout the world. “We met with the members in Germany, in Denmark, and in England,” he said. “We sensed their eagerness to learn and the sincerity of the questions they asked about the things that matter most—the matters of the soul.”

Elder Bednar continued, “Wherever we travel, the questions may be slightly different but they are focused on the same basic issues: How do I strengthen my faith in the Savior? How do I press forward when so many things in the world around us seem uncertain and confused? The answers are found in the restored gospel of Jesus Christ. To see the members all over the world pressing forward with a steadfastness of faith strengthens my faith.”