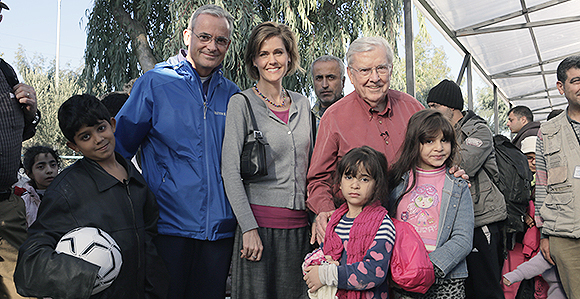 “Those who are willing to give help to anyone who is in distress—their hearts are touched. The power of Christ comes into their lives and hearts.” —Elder M. Russell Ballard of the Quorum of the Twelve

Elder M. Russell Ballard of the Quorum of the Twelve Apostles doesn’t know all the details of how one particular Syrian family made their way to a refugee camp on the Greek island of Lesbos. However, his brief encounter with the family’s 9-year-old son, Amer, are etched in his memory.

Elder Ballard watched as the family, wet and cold from their arduous sea crossing, arrived at the camp shortly after landing on Lesbos on November 20. He described what happened next:

“The wonderful people receiving the family gave the little children some Oreo cookies. This little boy, Amer, opened up his pack of cookies and offered me one. I did what anybody would do. I said, ‘No, these are for you.’ Amer would not pull the cookies away until I took one. I embraced him and thanked him.

“That was a tender moment for all of us. Here he was, just coming out of the water, still wet, and the first thing he wanted to do was give me the first cookie.”

Elder Ballard was on Lesbos as part of his assignment to visit six European countries November 12–22; his itinerary included visits to three refugee camps, the two on Lesbos and a third near Berlin, Germany.

In Berlin, they met with representatives of Malteser Germany, a foreign aid organization to which the Church donated money and supplies.

Of visiting the refugee camps, Elder Ballard said, “You read about it [the refugee crisis], you see pictures, but when you’re there and you see the magnitude of it—when you see mothers and fathers and little children and babies, and they’re all just anxious to get someplace where they feel is more secure—it has an impact. In the case of a lot of the people from Syria, they’ve lost their homes, they’ve been bombed out and are just trying to escape and find a safer place to live. The same is true of the Afghanis coming out of Iraq and people from a lot of other places.

“The thing that always gets me is the children.”

He spoke of the amount of work, the number of volunteers, and resources the Church makes available in “trying to relieve suffering of children and families who are hungry, those that are frightened, those that are seeking and looking for peace and confidence and assurance.”

Elder Ballard continued, “Always in the background, always in our thoughts, is that we don’t want anyone, man or woman or child, to be hungry or suffer, but we certainly don’t want children to suffer.” 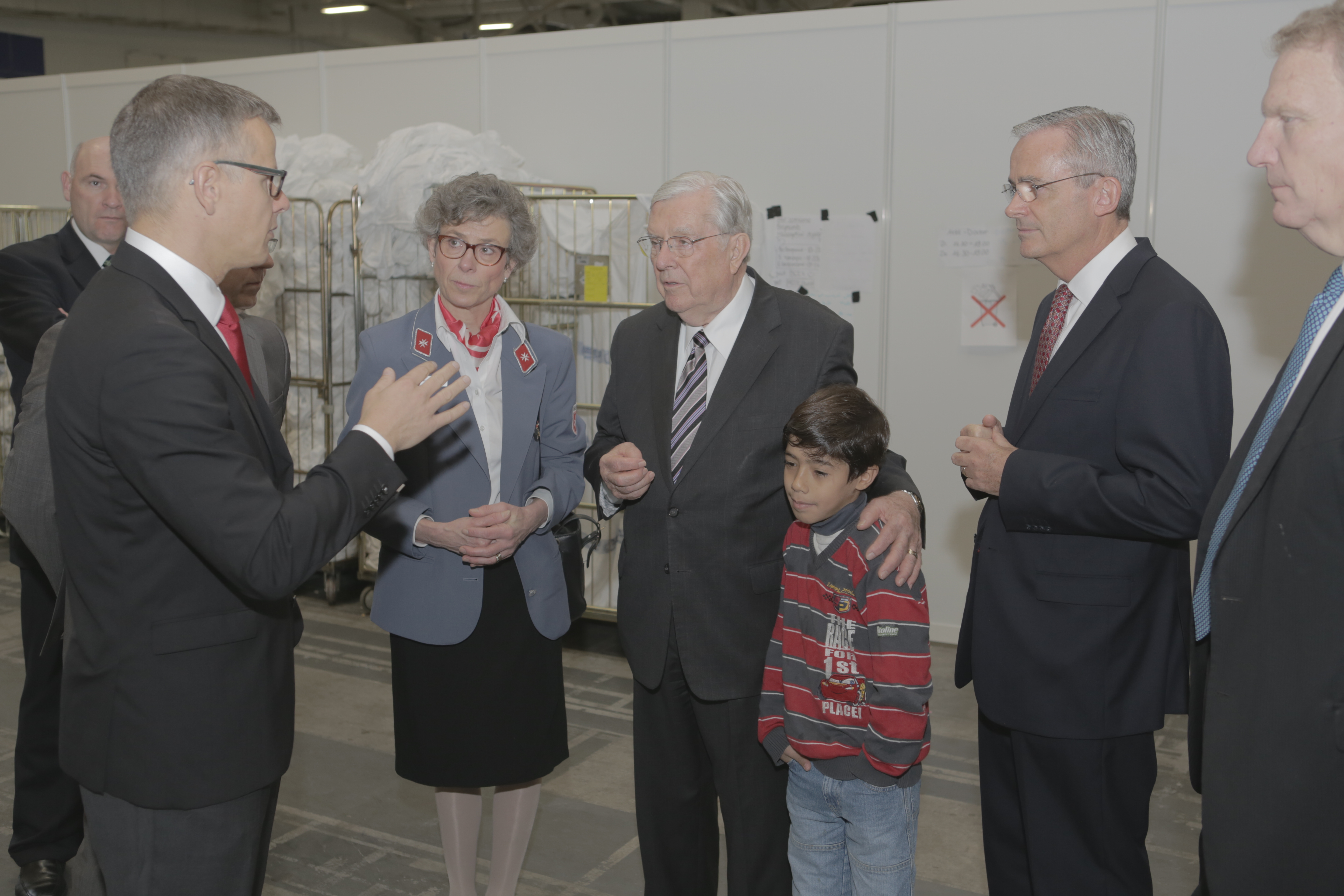 The Church, he noted, doesn’t stop at helping with necessities, such as hygiene kits, clothing, food, shelter, and other necessities, but also tries to bring some happiness into the lives of families and children. Through one of its partner charitable organizations in Germany, for example, the Church provided hula hoops and other toys to comfort, entertain, and delight children.

Elder Ballard and Elder Christensen spoke with admiration of how people working at the camps, most of whom are volunteers, are managing efforts to help the refugees. “They are doing remarkable work,” Elder Ballard said. “They don’t know from one day to another, or even from hour to hour, how many more will be coming.”

The brethren noted that the refugee crisis has been described as being of the magnitude of a natural disaster, day after day. On one day, 1,500 refugees might show up; the next day, 1,800 more might arrive, and then 2,000 might come the next day. They said the volunteers are overwhelmed, with some working 18–20 hours every day.

Elder Christensen said, “I felt the people who were serving were being blessed by those they were serving, as often is the case. The refugees come from many countries and join together in their journey, many times living under the same roof. They’re not coming from a common culture or background. Trying to manage the relief effort is really hard work, yet in the volunteers and those who are directing the work, you can see the Light of Christ, the desire to bless someone else without condition, just to help as needed. This is not just Church members but all the partner organizations that are involved. It’s quite an amazing thing to simply see the humanity of it, the sheer love that people have for one another.” 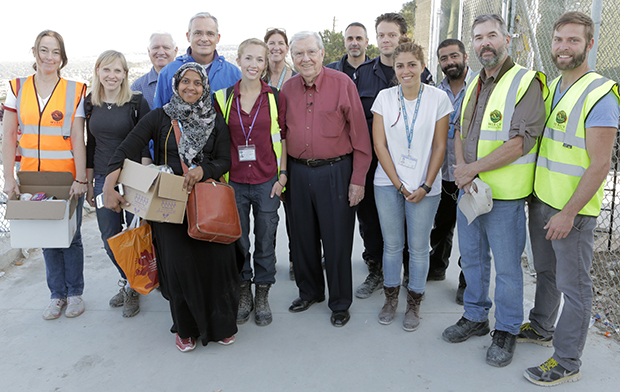 Elder Ballard said he thought it was impressive that the director of Malteser Germany referred to the refugees at its center as “our guests.”

He said as he’s had experiences such as seeing refugees coming out of Syria, Afghanistan, Iraq, and other places, he is reminded that they’re all God’s children. “I think the fact that we have so much, that we’re blessed so abundantly with so many of the good things of life, it’s wonderful to know that the Church has such a deep desire to help end suffering and to feed those who are hungry and feed those who need clothing and to bring peace and comfort too.” 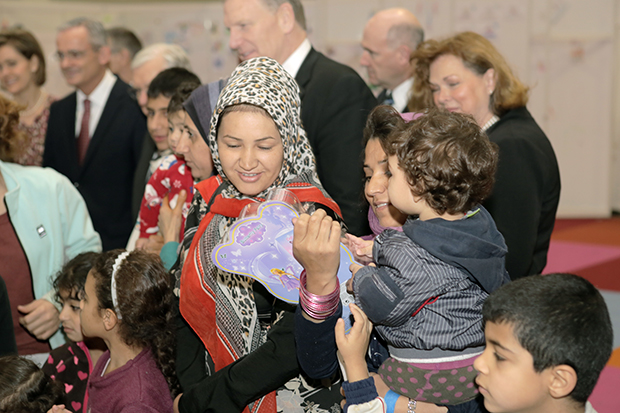 Children at a refugee camp in Berlin, Germany, receive toys donated by the Church.

He quoted the Savior’s admonition in Matthew 25 about feeding the poor, visiting those in prison, taking care of those who are suffering, and His declaration, “Inasmuch as ye have done it unto one of the least of these my brethren, you have done it unto me.” 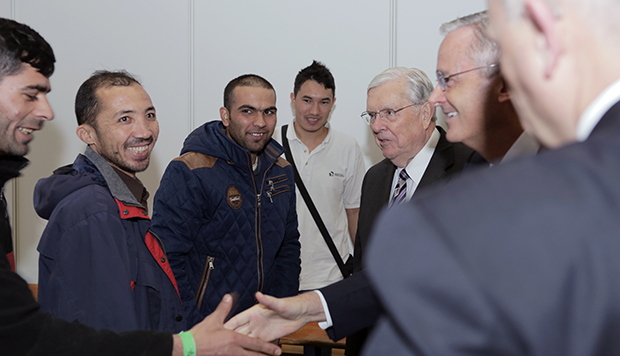 “You really see the Savior’s hand,“ Elder Ballard reflected. ”Even under those desperate circumstances, it’s wonderful that His Church can reach out and do what He would if He were here Himself. To understand that we’re all brothers and sisters and God’s children, you just have to be with them. You just have to look in their eyes. All of those that I met, it was hard to talk to them. Unless you have an interpreter with you, you talk with your eyes. You talk with your smiles. You talk with your arms in embracing them and trying to give them peace and comfort. We said many times, ‘We’re here to help.’ You don’t talk with their language. There’s an international language of love that takes place. You talk heart to heart.” 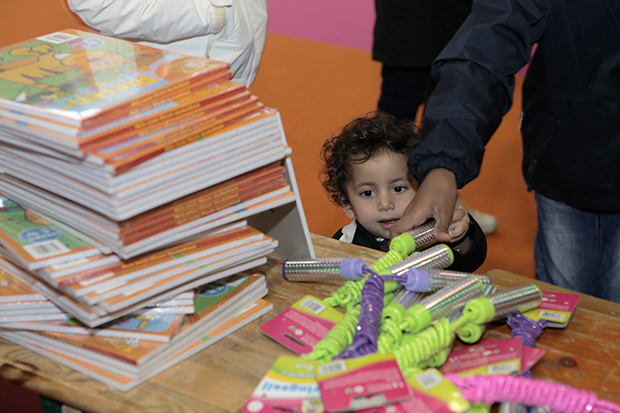 A child at a refugee camp in Berlin receives a toy donated by the Church.

Elder Christensen said, “We saw many of our members and missionaries giving countless hours of service; the response from our members has been excellent. Our European members have all participated in some way. We asked one of the partner organizations, ‘Do they need clothing?’ The response back was that the European people, including our Saints, have rallied to provide the needed clothing at this time. Our members are having opportunities to serve and to bless, and we anticipate that this service will be needed for many months and years to come. It’s a little interesting because of the events around this make for some uneasiness, but our members just work right through it and go to work. They just start helping and serving others. 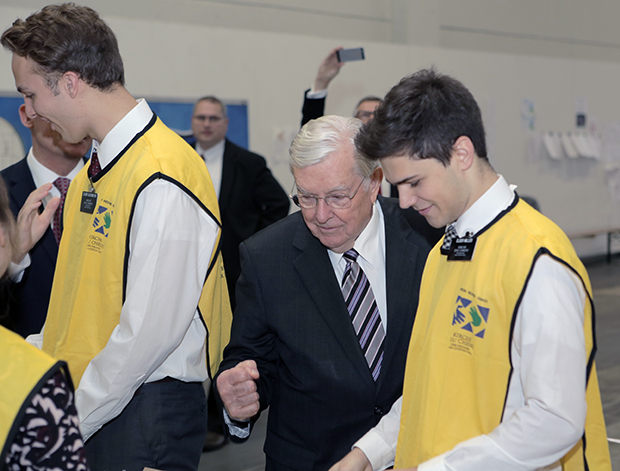 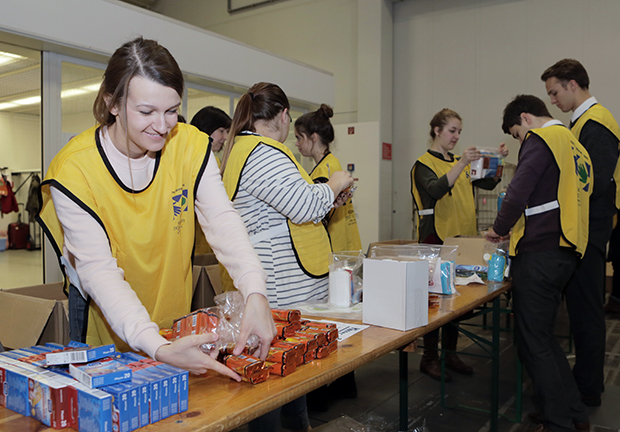 “The needs are apparent to everyone in Europe. We just want to thank them for what they’re doing and encourage them to do more, much more.”

Elder Kearon commented on the work being done by the Church’s partner organizations. “We are pleased to work with such compassionate and experienced partners,” he said. “We have seen what they do and are confident that our joint efforts will make a difference in the lives of those fleeing from war and misery.” 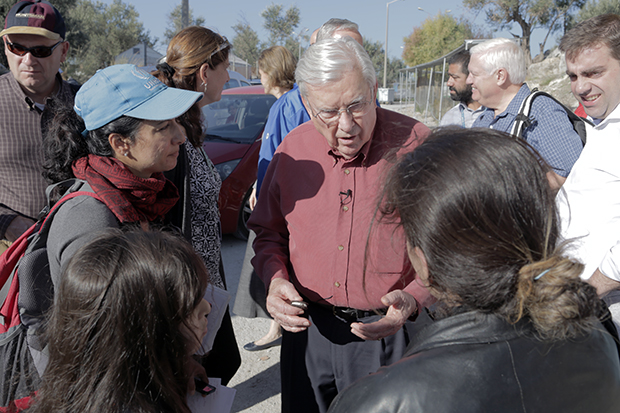 Elder Ballard spoke of seeing life vests strewn along the road, dropped by people who had made the perilous journey by boats, rafts, or dinghies to Lesbos. “You just wonder about the mother, the father trying to hang on to their little ones. I can’t imagine the fear they would have gone through on the water to make sure they were going to get where they can have a better life.”

Elder Ballard acknowledged there are evil, wicked people in the world, but “there are also a lot of good people in this old world.” He spoke of those who offset evil through their compassionate acts. “Those who are willing to give help to anyone who is in distress—their hearts are touched. The power of Christ comes into their lives and hearts.” 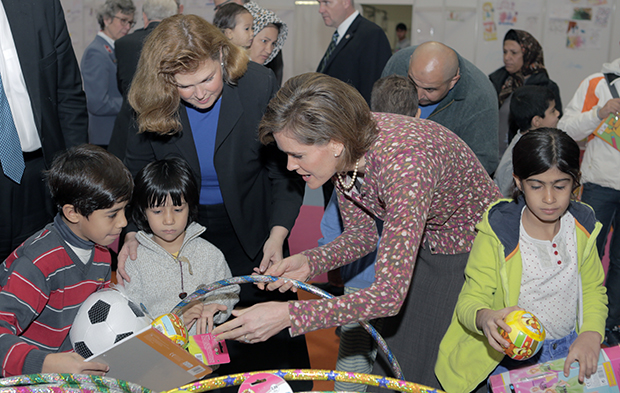 Elder Ballard and Elder Christensen were together in Birmingham, England, and Berlin, Germany, November 14–15, and Dublin, Ireland, November 21–22; they traveled separately the rest of the time. Elder Ballard went to Frankfurt, Germany; Moldova and Bucharest, Romania; and Athens, Greece. Elder Christensen went to Barcelona and Madrid, Spain, and Budapest, Hungary. They conducted priesthood leadership conferences, met with missionaries, and held member meetings and spoke at an area-wide broadcast to stake and ward leaders during their travels. 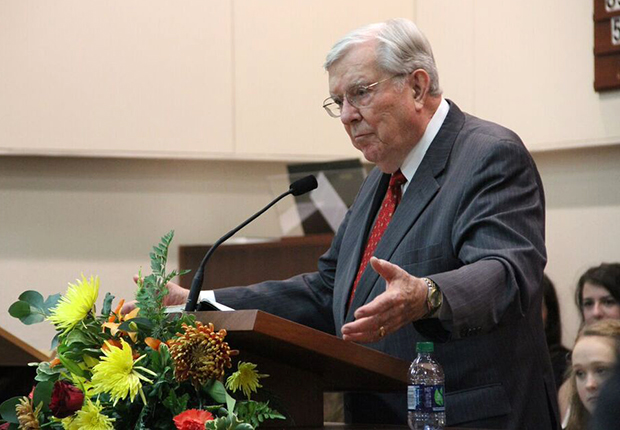 Elder M. Russell Ballard of the Quorum of the Twelve Apostles addresses members in Birmingham, England. 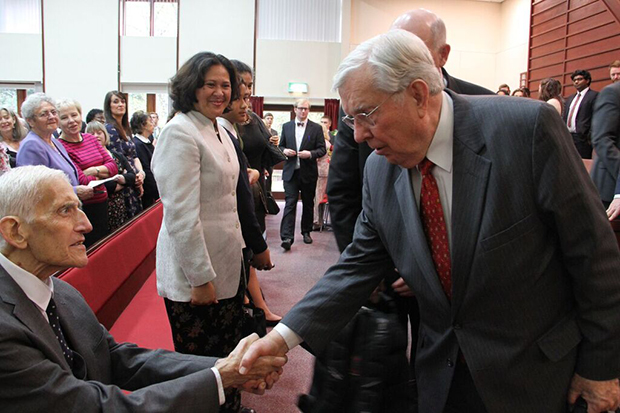 Elder M. Russell Ballard of the Quorum of the Twelve Apostles greets a member in Birmingham, England.

Elder M. Russell Ballard of the Quorum of the Twelve Apostles addresses members in Birmingham, England.