Elder Ballard: Today’s Temples Will Be Used in the Millennium 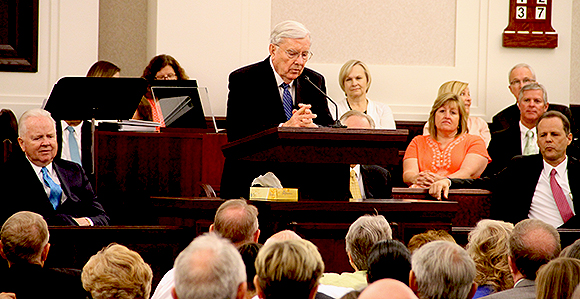 Elder M. Russell Ballard of the Quorum of the Twelve Apostles speaks to workers in the Mount Timpanogos Utah Temple during a devotional in Lehi, Utah, on Sunday, June 4.

“We’re building these temples not only for us in this moment of our history, but we’re building temples which will be used during the Millennium when this great work will be carried on in the house of the Lord … under the direction and supervision of the Lord Jesus Christ Himself.” —Elder M. Russell Ballard of the Quorum of the Twelve Apostles

In a time of unprecedented access to the blessings of a temple—with 156 found throughout the world and many more in the planning and development stages—Elder M. Russell Ballard of the Quorum of the Twelve Apostles declared that the Church would continue to build temples.

“We’re building these temples not only for us in this moment of our history, but we’re building temples which will be used during the Millennium when this great work will be carried on in the house of the Lord … under the direction and supervision of the Lord Jesus Christ Himself,” Elder Ballard said during a devotional to temple workers on Sunday, June 4. “That’s going to be a wonderful thing.”

More than 2,700 workers in the Mount Timpanogos Utah Temple and their friends and families were invited to attend the special devotional, which originated at a stake center in Lehi and was broadcast to two others. An estimated 3,000 individuals from 66 stakes throughout the temple district filled the three meetinghouses to hear counsel and encouragement from the Apostle.

In his remarks, he shared some “very tender experiences” from when he supervised South America shortly after being called to the Quorum of the Twelve Apostles in 1985.

During that time, the Lima Peru Temple presidency received notice that a group of members was coming by bus from Guayaquil, Ecuador. They were to arrive Tuesday and then spend three days receiving their endowments, being sealed, and performing vicarious work for their ancestors before returning home Friday.

However, they did not arrive on Tuesday, nor Wednesday, nor Thursday. The workers at the Lima Temple assumed the Guayaquil group had been forced to return home.

On Friday at 2 a.m., the temple president, Glen V. Holley, received a call from the security guard at the temple, who had received word that the bus from Ecuador had arrived in Lima and was approaching the temple. President Holley instructed that the outdoor temple lights be turned on and began calling for ordinance workers to come to the temple. When the bus arrived, the temple was aglow.

President Holley entered the bus and saw that the Ecuadorian Saints were crying. One brother sobbed, “We’ve arrived! We’ve arrived!”

President Holley ushered them to a place where they could clean up and shower. By 5 a.m. unscheduled temple sessions were in progress. They spent the entire day in the temple before departing that evening.

Before they left, the members in Lima came to the temple with baskets full of food and provisions for the two-and-a-half-day return trip to Ecuador.

This story, Elder Ballard said, “reminds us how wonderfully blessed we are to have access to this beautiful temple.”

Elder Ballard also told of an indigenous Peruvian woman who came to the Lima Temple president, Glen Holley, and wanted to receive her endowment and be sealed to her husband and children. When President Holley explained that she would have to wait for a period of time after being baptized before she could enter the temple, she told him, “President, you don't understand. I’m 107 years old.”

However, six months later to the day, the woman arrived at the temple and was sealed to her husband, who had passed away 48 years earlier, and their children.

President Holley told Elder Ballard that as he knelt by her wheelchair, took hold of her hand, and looked into her eyes, he had never seen a more spiritual, faithful daughter of God.

Elder Ballard then recalled when three native Peruvian missionaries were killed in Huancayo, Peru. “The minute I heard, I was on board an airplane to Lima and then to the residences of the missionaries’ families,” he said.

As he met with one of the families, he said to them, “I’m here representing the First Presidency and Quorum of the Twelve. I’m here to assure you and tell you how much we love you and your family and assure you that your sons have been transferred to the same work that they were doing when they were working in Huancayo and that they’ll be yours forever.”

The father of one of the missionaries, however, stopped him and explained that his family had joined the Church 13 months prior because of his son. They had been sealed together as a family one month earlier. The grieving father told Elder Ballard, “We understand the great blessing of having a temple, and we understand that we have not lost our son but that our son is separated for but a short season.”

Elder Ballard reminded listeners that the work performed in the temple is eternal in nature. “So my message to you tonight is: How glorious and how wonderful it is to be a part of this great and noble work we call temple work!”

“Sometimes, when we’re in the deepest moments of trial, when we’re having the most difficult times physically, emotionally, mentally, spiritually, … that’s when we come to really know God,” Elder Ballard said.

Patrons might walk through the doors of the temple heavily burdened and seeking solace. “May God bless you with your smiles, with your handshake or welcoming spirit, your tenderness and thoughtfulness as they do sacred work in the house of the Lord that they find solace and they find peace in the house of the Lord, in the Mount Timpanogos Temple.”

Elder Ballard told the temple workers to cherish their time serving in the temple. “May the peace of the Lord be with each of you in your homes, in your families, and may the righteous desires of your hearts be granted to you as you do this sacred and holy work in the house of the Lord.”