Lachlan Mackay, recently called to the Council of Twelve Apostles for the Community of Christ, and Elder M. Russell Ballard of the Quorum of the Twelve Apostles, during the August 6 commemoration of the 25th anniversary of the dedication of the improved Smith Family Cemetery. Both serve as members of the Board of Trustees for the Joseph Smith Sr. and Lucy Mack Smith Family Foundation.

Two world leaders—Elder M. Russell Ballard of The Church of Jesus Christ of Latter-day Saints and Elder Lachlan Mackay of the Community of Christ (both descendants of Joseph Smith Sr. and Lucy Mack Smith)—met with more than 400 cousins in Nauvoo, Illinois, on August 6 to commemorate the 25th anniversary of the Smith families coming together to beautify, enlarge, landscape, and increase access to the Smith Family Cemetery.

During the ceremony, the family also placed a marker to honor Lewis C. Bidamon, Emma’s second husband and the last to be buried in the cemetery. Elder Mackay spoke of Bidamon’s welcoming generosity, his humor, and his caring of Emma’s sons. “For raising [Joseph Smith Jr.’s] children I will be eternally grateful. I am just thrilled we are finally able to mark Lewis’s grave,” Elder Mackay said.

The cemetery project dates back 30 years. Elder Ballard and Wallace B. Smith—president of what was then the Reorganized Church of Jesus Christ of Latter Day Saints, now the Community of Christ—along with other descendants of Joseph Smith Sr. and Lucy Mack Smith, tasked themselves with the responsibility to improve the cemetery. Daniel Larsen, a great-great-grandson of Joseph and Emma Smith; Karl Ricks Anderson, a Latter-day Saint and executive secretary of the board of directors of the Joseph Smith Sr. and Lucy Mack Smith Family Foundation; and Donna Lee Frogley, a great-great-great-granddaughter of Hyrum Smith, had key roles in the endeavor.

During the spring and summer of 1991, the family foundation placed a new headstone on top of the flat granite marker identifying the graves of Joseph, Emma, and Hyrum and installed brick walkways, lights, benches, a new fence, and interpretive information. Elder Ballard attended the ceremony at which President Wallace Smith dedicated the improved cemetery on August 4, 1991.

In the years since, the Smith families have provided materials and labor to maintain and continue to improve the cemetery, which is owned by the Community of Christ. Some 100,000 people visit the cemetery each year; an estimated two million have visited during the past 25 years. The following lines were represented at this year’s reunion: Hyrum, Joseph Jr., Samuel, Kathryn, and Lucy.

Before the ceremony at the cemetery, Elder Ballard and his cousins visited Carthage Jail, where Joseph and Hyrum were martyred on June 27, 1844. During a brief program outside the jail, Elder Ballard spoke of driving by the Nauvoo Temple and reflecting back on the experience of his great-grandfather, Joseph F. Smith, as he watched his father and Uncle Joseph ride away to Carthage. Without getting off his horse, Hyrum leaned over his saddle and picked up Joseph F., who was five years old, kissed him good-bye, and put him down again.

Elder Ballard described what transpired when Joseph F. Smith visited the “martyrdom room” in 1906 in the company of his good friend Charles Nibley and his son, Preston Nibley. Elder Ballard recited a portion of Preston Nibley’s description of how, upon being shown Hyrum’s blood stains on the floor, Joseph F. Smith “sat on the bed, put his hands over his face and convulsively wept” until Brother Nibley could “see the water dripping through his fingers” and then said, “Charlie, take me out of here.”

Continuing, Elder Ballard said, “I somehow feel that Joseph and Hyrum are aware that we’re here, because we’re family. …

“All who are associated—by blood or testimony—of the divine mission and life of Joseph Smith, Hyrum Smith, and Samuel Smith, who later lost his life as a result of his efforts to reach his brothers, have reason this beautiful morning as their posterity to bow our heads in quiet contemplation of what it means for us to not only know the gospel that they fought and gave their lives for, but to know them as our beloved forefathers, uncles, or grandfathers. Now with this great knowledge, in my judgment, comes a great responsibility. …

“We are charged to testify, to witness, and live as they would expect us to do because within those who are family members courses the blood of believing prophets. … May the Lord bless us to never ever underestimate the glorious, marvelous message of the Restoration and that the heavens were opened.”

Earlier in the program, Susan Easton Black, a BYU professor emeritus, spoke of events that transpired four days leading up to the martyrdom. She noted, “One of Governor [Thomas] Ford’s fears was that someone would link his name with Joseph Smith just as Pilate’s name was linked with the name of Jesus Christ.”

Richard N. Holpzapfel, a professor of Church history and doctrine at BYU, said that many Latter-day Saints question why the Prophet Joseph had to die, but a revelation given by the Lord to Brigham Young explains, “It was needful that he should seal his testimony with his blood, that he might be honored and the wicked might be condemned” (D&C 136:39).

The commemorative events concluded with a family meeting that evening in the Nauvoo Illinois Stake Center. Brother Anderson paid tribute to Lucy Mack Smith, saying that her primary role was to be a support to her 11 children; seven preceded her in death. He encouraged the family members to read her book, History of Joseph Smith, and consider its pages “as a personal letter to each of you from her.”

Elder Ballard gave a closing challenge to family members to have faith and trust in the Lord.

While in Illinois, Elder Ballard met with missionaries serving in Nauvoo on Friday evening, August 5. 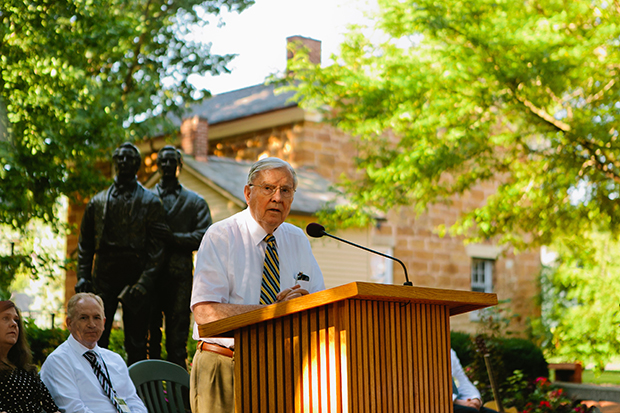 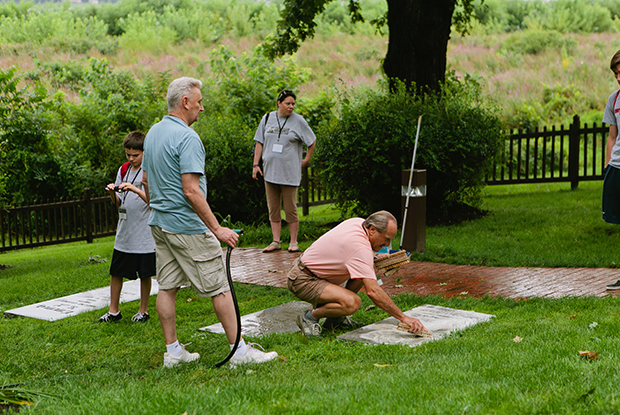 Descendants of Joseph Smith Sr. and Lucy Mack Smith clean and beautify the Smith Family Cemetery as part of a service project during the Smith family reunion in Nauvoo on August 6. Photo by Lindsey Orton. 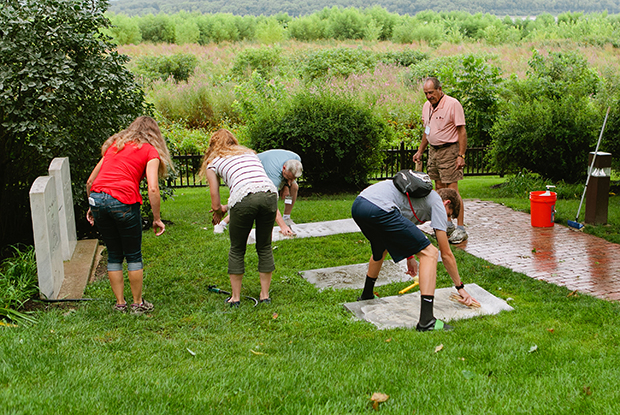 Descendants of Joseph Smith Sr. and Lucy Mack Smith clean gravestones as part of a service project during the Smith family reunion in Nauvoo on August 6. Photo by Lindsey Orton. 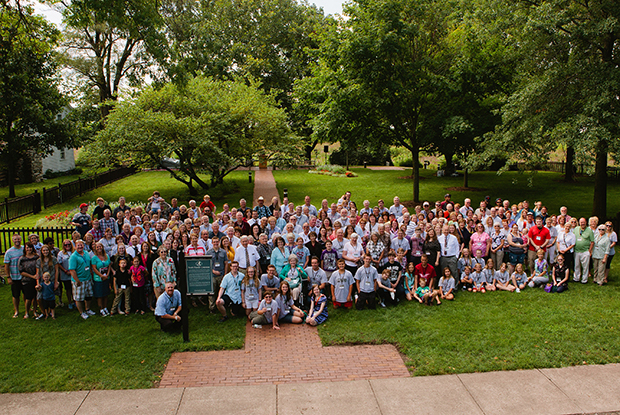 Members of the Joseph Smith Sr. family reunion gather for a group photo on August 6. Photo by Lindsey Orton. 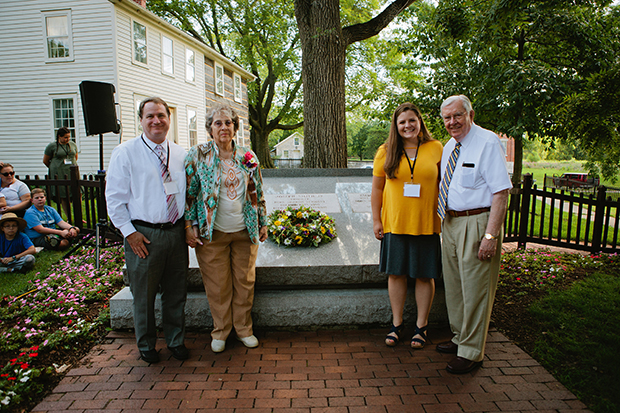 Lachlan Mackay, recently called member of the Council of Twelve of the Community of Christ, and Anina Luff with Katie Clayton and Elder M. Russell Ballard of the Quorum of the Twelve Apostles at the 25th anniversary commemoration of the Smith Family Cemetery dedication on August 6. Photo by Lindsey Orton. 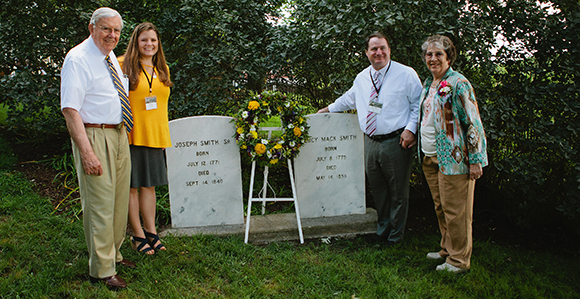 Elder M. Russell Ballard of the Quorum of the Twelve Apostles and a granddaughter, Katie Clayton, lay the commemoration wreath at the Joseph Smith Sr. and Lucy Mack Smith grave site with Lachlan Mackay, recently called member of the Council of Twelve of the Community of Christ, and his mother, Anina Luff. Photo by Lindsey Orton.