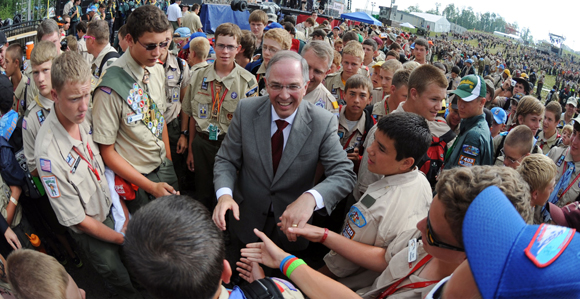 Elder Neil L. Andersen of the Quorum of the Twelve greets Scouts at the July 21 sacrament meeting at the 2013 National Jamboree.

“If we do our very best, if we become our very best, then at those times when evil is thrust upon us, we can know that through our prayers, the Lord will cleanse our minds and our spirits.” —Elder Neil L. Andersen of the Quorum of the Twelve

Elder Neil L. Andersen stood before a massive Sabbath-day gathering of Scouts on July 21, reminding them that “to do our best, we must first be our best.”

A member of the Quorum of the Twelve, Elder Andersen presided over the sacrament meeting at the 2013 National Scout Jamboree in West Virginia. The Apostle marveled at the size of the outdoor gathering, calling it “the largest sacrament meeting I have ever attended.”

Sixty priests and a combination of 180 deacons and teachers participated in the blessing and the passing of the sacrament.

Elder Andersen anchored his remarks to the familiar first words from the Scout Oath: “On my honor, I will do my best to do my duty to God.”

Sacred impressions and promptings, he taught, can help a person be his or her best.

“To be our best we must recognize that there is good and there is evil,” he said. “At the head of all that is good is Jesus Christ. He is the Only Begotten of the Father and created our world. He is a resurrected and perfect being. I know that He lives.”

Evil, he added, comes from Satan. But the power of the Savior and the power of the devil are not comparable. Christ’s power is infinitely greater. Still, on earth one must choose between good and evil.

“In the final review of our lives, it will not matter if we are rich or poor, if we are athletic or not, if we were popular or many times forgotten. What will matter most is if we chose to follow the Savior and to choose those things that are right.

“In this world, it is sometimes difficult to clearly see what is right and what is wrong. We must have the Spirit of God with us.”

One can see clearly when his or her spirit is clean and pure.

He shared the experiences of Joseph F. Smith, the Prophet Joseph’s nephew, who was called to serve as a missionary to Hawaii at the age of 15. Young Elder Smith found courage—despite his youth and inexperience—because he kept himself clean.

The Apostle then spoke of the “epidemic of pornography” found across the world. “You must resist it. Avoid it as you would the plague.”

Sometimes a person can be exposed to such things unexpectedly. Elder Andersen spoke of an experience of President Henry B. Eyring, First Counselor in the First Presidency, who was unknowingly exposed to pornographic images when he walked into an unfamiliar store in Europe.

President Eyring quickly turned and walked outside. But the pictures he had seen kept coming back to his memory. He prayed that they would be removed from his mind. He then asked for the Lord’s continued protection to be guarded from temptation.

His fervent prayers were answered, and the troubling images were erased from his mind. 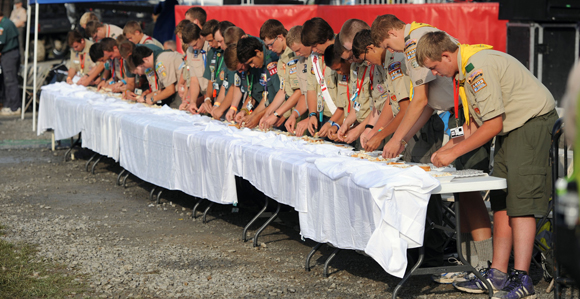 “If we do our very best, if we become our very best, then at those times when evil is thrust upon us, we can know that through our prayers, the Lord will cleanse our minds and our spirits,” said Elder Andersen.

One’s duty to God, he added, is fulfilled when one chooses good over evil. “As we become who we are to become, we are able to be of service to others and build and lift those around us.”

In her brief remarks, Sister Andersen spoke to the young men about the importance of always choosing the right. She repeated the timeless words Helaman shared with his sons: “And now, my sons, remember, remember that it is upon the rock of our Redeemer, who is Christ, the Son of God, that ye must build your foundation; that when the devil shall send forth his mighty winds, yea, his shafts in the whirlwind, yea, when all his hail and his mighty storm shall beat upon you, it shall have no power over you to drag you down to the gulf of misery and endless wo, because of the rock upon which ye are built, which is a sure foundation, a foundation whereon if men build they cannot fall” (Helaman 5:12).

Brother Perry, a convert, spoke of his appreciation for the ongoing relationship between the Church and Scouting.

Although dark skies hung overhead during much of the meeting, the thousands gathered for the outdoor meeting stayed relatively dry.