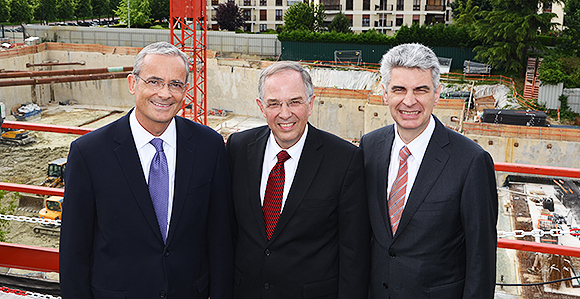 “They love families in France; not just members of the Church but all French people love their families. Our message is that these families can continue through the veil as a family unit forever. What greater blessing could we offer them!” —Elder Neil L. Anderson of the Quorum of the Twelve

The Paris France Temple is rising as a fulfillment of prophecy.

During a meeting in Paris in 1998, President Gordon B. Hinckley told some 2,400 Latter-day Saints, “The time will come … when we can construct somewhere in this area a house of the Lord, a sacred temple.”

Returning to Paris six years later, in 2004, when a temple site had yet to be found, President Hinckley said, “Sometime in the future, a beautiful house of the Lord will grace this land.”

On both visits, President Hinckley asked the members to pray that the Lord would direct Church leaders to the appropriate site for the temple. That site was found in 2009 in Le Chesnay, a city of some 30,000. The temple is under construction. The grounds of the temple are about 200 meters from the grounds of the Château de Versailles, one of France’s most famous landmarks.

Elder Neil L. Andersen of the Quorum of the Twelve Apostles, Bishop Gérald Caussé of the Presiding Bishopric, and Elder Patrick Kearon of the Seventy and a counselor in the Europe Area visited France June 10–14. On June 13, they went to the temple site and met in the LDS chapel in Versailles with about 60 people—most of whom are not Latter-day Saints—who are involved in the construction of the temple. The group included architects, lawyers, builders, contractors, construction company representatives, and others.

“I explained to them that this will be a house of the Lord,” Elder Andersen said. “I spoke to them of angels. I went through the times of angels in the Bible, including Gabriel appearing to Mary and the angels in the fields announcing the birth of Christ. I said, ‘Angels are real. They minister to people on this earth. This sacred temple will be one place where angels will be. We want you to build a building that you know will be a holy building. It will be a building for people on this side of the veil and the other side of the veil as well.’ I thanked them on behalf of the Church for the work they are doing.”

Elder Andersen said, “It’s a building unlike those they have built because of the very high quality and because of its spiritual nature. They don’t build many buildings like this anymore, with the beautiful limestone and slate. They are very taken by the project, not just for the materials, but also for spiritual reasons. One of the lawyers said, ‘I have not been a religious man, but I feel there is something very special about this temple.’”

Bishop Caussé said the Church has been working with a governmental office of architects that must approve the designs and materials of any building constructed close to a monument, such as Versailles. “We’ve worked closely with the architects to make the temple a beacon in the area. Their approval means the temple will be in full harmony with the surrounding area. We want the temple to be not only a blessing for the members but also an asset for the whole community.”

A native of France, Bishop Caussé heard President Hinckley promise members in 1998 that a temple would be built and then asked that they pray for that to happen.

Bishop Caussé was president of the Paris France Stake when President Hinckley made his return visit in 2004. “I was his driver,” he said. “We visited several sites, but he didn’t feel that any one of them was the site for the temple. We had to wait until 2009 for a site to be found.”

It was 11 years after President Hinckley made his promise.

“The members knew they had an important part to play. In my family, and in families of other French Saints, we prayed for the temple on a daily basis and with our children. It has been a trial of patience and faith. Until only a few weeks ago, many members wouldn’t talk openly about the temple. It was more a private expression of expectation and faith that the Church members had in their hearts.

“I think Elder Andersen’s visit has marked a transition to a more open period of rejoicing and preparation. He gathered the stake and mission presidents and said, ‘The temple is under construction. Now is the time to get prepared so that you can rejoice in the forthcoming dedication of the temple.’”

Bishop Caussé said that from the time he was a young boy, his family went from Bordeaux one week each summer to Switzerland, traveling for two days to the Bern Temple. Some years, they would pitch their tent in the forest behind the temple. “I think all my generation who have come from Europe have that experience in common,” he said.

In addition to visiting the Paris Temple’s construction site and meeting with those who are working on the temple, Elder Andersen, Sister Kathy Andersen, Elder Kearon, and Sister Jennifer Kearon met with missionaries of the France Lyon Mission and held a member devotional on June 10 in Nice.

Elder Andersen praised the outstanding leadership of France Lyon Mission President Blake M. Roney and his wife, Sister Nancy W. Roney. Joined by Bishop Caussé in Paris on June 13 and 14, they met with all the French-speaking stake presidents and held a devotional for the youth and young single adults in the Paris stakes. The youth especially appreciated Sister Andersen speaking to them in their native French.

Elder Andersen served as a young missionary in France from 1970 to 1972, president of the France Bordeaux Mission with his wife and family from 1989 to 1992, and in the Europe Area Presidency from 1994 to 1997. He said of the missionaries in Lyon, “They were amazingly prepared, and the Spirit of the Lord was in great abundance. Being a missionary in France requires a lot of diligence and patience, but there are beautiful people who seek the Savior, and our missionaries find them.”

He and his wife, Sister Andersen, were reunited with members they've known over the years. “Meeting with the members is always a pleasure for me,” he said. “We were able to see once again our dear friends Jean-Paul and Marie-Jo Guerinot. He served as my counselor 25 years ago and since that time has had no rest, serving as a district president, stake president, and bishop twice in those past 25 years. Those who embrace the gospel fully find that the Church takes a major part of their lives.”

Elder Andersen said that while the Church doesn’t grow quickly in France, it does continue to grow. “We met with all 13 of the French-speaking stake presidents from Europe. I had met with them some 18 months previously as I came through Paris; this meeting was a joyful reunion as we rejoiced over the progress that has been made. There are hundreds more people coming to sacrament meetings. An additional stake has been organized, and now a beautiful temple is being constructed. The Lord’s blessings are upon this beautiful land of France and the French-speaking members of Europe. I know He loves them for their devotion and sacrifices on behalf of the restored gospel.

“We are now seeing a Church with many third- and fourth-generation members. Two of the stake presidents who were there with me I knew years before when I was a mission president. Brother Matthieu Bennasar, who is now the stake president in Lyon, France, was a young man living in Bordeaux. His parents were great members of the Church, and Matthieu was preparing to leave on his mission as we were serving our mission there. Now he has a family of his own, has completed his education, and has taken his role in leading the Church. Serge Gaston, who is a stake president in Paris, is the son of one of the early converts in Marseilles. The women are no less valiant. They are full of faith and raising another righteous generation in the Church. They love families in France; not just members of the Church but all French people love their families. Our message is that these families can continue through the veil as a family unit forever. What greater blessing could we offer them!”

Further, Elder Andersen said, “The signs of Christ are throughout France. There are crosses and beautiful churches. As the churches are now owned by the government, there is not the vibrant faith that once filled this beautiful country. But the Lord has sent His restored gospel and the elect of the earth are being brought together that there might always be the truth available to those who seek for it. I love the French Saints.”