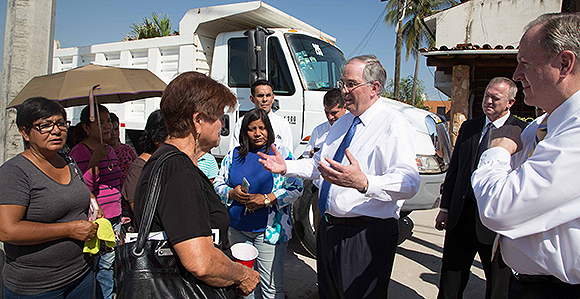 Elder Neil L. Andersen is greeted by grateful residents of Jojutla, Mexico. The Church has provided ongoing relief aid in the community following a massive earthquake in September 2017.

“The devotion, faith, and unselfishness of the Mexican Saints are examples to the Saints around the world. Mexico will be a center of devotion to the Savior right up to the time of the Savior’s return.” —Elder Neil L. Andersen of the Quorum of the Twelve Apostles

Still, the million-plus Latter-day Saints living in Mexico have plenty to look forward to, according to an Apostle who recently spent 10 days (February 16–25) touring the nation.

“Mexico is a very strong country,” declared Elder Neil L. Andersen of the Quorum of the Twelve Apostles.

“I was able to promise the Mexican Saints that their country has a wonderful future. The Church will be strong and there will be economic opportunities for their children and their grandchildren.”

While in Mexico, Elder Andersen, along with Elder Lynn G. Robbins of the Presidency of the Seventy, enjoyed interacting with members, missionaries, and local civic leaders. They participated in gatherings in Mexico’s three largest cities (Mexico City, Guadalajara, and Monterrey) and made a February 21 visit to Jojutla, a village devastated by an earthquake last autumn.

Elder Andersen, Elder Robbins, and the Mexico Area Presidency also participated in the taping of a pair of instructional videos that will be used in missions and congregations across the country. 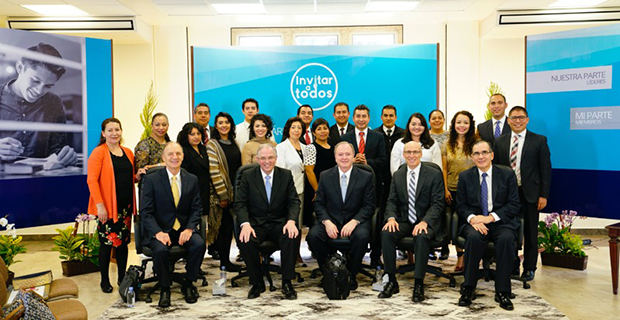 Elder Neil L. Andersen, Elder Lynn G. Robbins, and the Mexico Area Presidency participate in the making of a Church instructional video that will be utilized by units across the country.

“It was a great blessing for the members and leaders of the Mexico Area to have the extended visit of Elders Andersen and Robbins,” wrote Elder Pieper in an email to the Church News. “They lifted and inspired the missionaries from five missions to increase their faith in the Savior and use that increased faith to find more of the Lord’s elect.”

The people of Mexico, he added, “have great faith in the Lord and His servants.”

Industry, hope rising from the rubble

Elder Andersen and Elder Robbins agreed that being with the resilient yet understandably quake-weary residents of Jojutla was one of the highlights of their recent trip.

A 7.2-magnitude earthquake struck the town last September. Lives were lost and many residents were left without homes and most of their possessions. Counted among the affected were several LDS families.

The Church responded immediately. Mormon Helping Hands volunteers from around the country worked side-by-side with Church-sponsored work crews to help clear away rubble and fallen walls even while offering encouragement and hope. 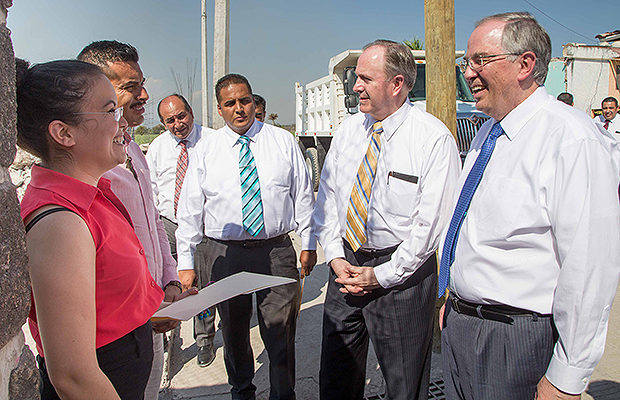 Local residents who wanted to shake hands and offer gratitude greeted Elder Andersen, Elder Robbins, and members of the Area Presidency on the streets of Jojutla.

Most were not Church members.

“They told us, ‘Thank you. We could have never moved all the debris without the Church bringing in equipment and volunteers to help clear it out,’” said Elder Andersen.

The brethren listened to harrowing stories from quake survivors and met with municipal leaders, who also expressed thanks for the Church’s continuing efforts to aid Jojutla.

The industry and self-reliant impulse of the Jojutla members impressed Elder Andersen. Yes, they have welcomed outside help, but they have proven committed to helping themselves—and their neighbors.

“They are working together to improve their situation.”

At each stop of the Mexico trip, Elder Andersen and Elder Robbins met with the country’s “rising generation” of Latter-day Saints. Many have Mormon grandparents and great-grandparents. But many others have joined the Church in recent months and years.

“When we see the youth of Mexico, we see the great promise of the Church,” said Elder Andersen. “We were so impressed by the vibrancy of the young people and the clearness in their eyes.”

Guadalajara is often described as the “most Mexican of all Mexico’s cities.” So it made an apt locale to host a young adult devotional that was broadcast to tens of thousands across the nation.

In their remarks, the Brethren encouraged their young audience to be active players in the Church’s growth in Mexico, acquire employable skills, learn self-reliance, and be optimistic about the days ahead.

They also responded to a variety of questions. Besides seeking clarity for their own futures, the young adults asked about President Russell M. Nelson and his prophetic leadership. “We told them that as they are willing to learn and to work, there is great opportunity in Mexico,” said Elder Andersen.

Meetings with the missionaries offered glimpses into an increasingly global Church. A large percentage of the young elders and sisters are native Mexicans. They are supported by a sizeable number of missionaries from the United States, Canada, and several Latin American countries.

“We were excited to learn that many of these missionaries had found the Church just two or three years prior to the missions,” said Elder Andersen.

Mexico: a “center of devotion”

In Mexico City, Elder Andersen and Elder Robbins sat down with the Mexico Area Presidency and other local administrators for the annual area review. Members across the country, they learned, are increasingly adopting principles of self-reliance.

“And Mexico is seeing a great increase in family history work and increased fidelity in their tithes and fast offerings,” said Elder Andersen.

“And we’re seeing a greater percentage of young men who are providing their own funds for their missions,” added Elder Robbins.

Volumes have been written about Mexico’s rich Church history. It’s a proven success story. But many more chapters are yet to be written in this essential bastion of the restored gospel.

“The devotion, faith, and unselfishness of the Mexican Saints are examples to the Saints around the world,” said Elder Andersen. “Mexico will be a center of devotion to the Savior right up to the time of the Savior’s return.” 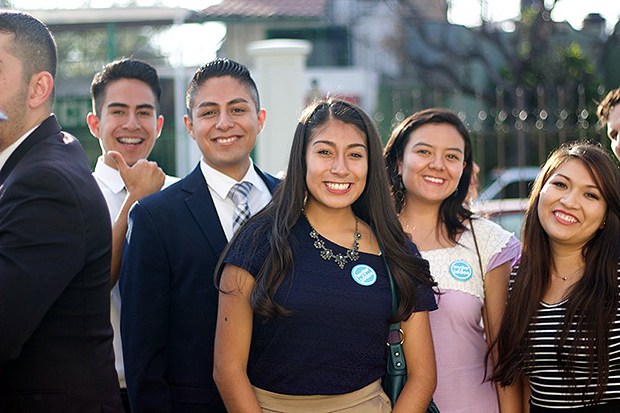 Young adults in Guadalajara, Mexico, gather to hear Elder Neil L. Andersen of the Quorum of the Twelve Apostles.