Elder David A. Bednar and his wife, Sister Susan Bednar, answer questions from youth all over the world in a live “Face to Face” online event May 12. A seminary class from the Philippines and a youth group from Guatemala also participated in the live event.

Elder David A. Bednar and his wife, Sister Susan Bednar, answered questions from youth in all over the world in a live “Face to Face” online event May 12.

Thousands of youth participated by using #LDSface2face on various social media channels and by commenting on the Church's Youth Activities site. Youth of all ages and nationalities sent in their questions, concerns, and remarks in the form of 5,000 comments on the Youth Activities site and over 10,000 tweets. Several questions were addressed during what Elder Bednar, a member of the Quorum of the Twelve Apostles, called “the largest Mutual activity in the history of the restored Church.”

This “Face to Face” event was the third broadcast of its kind but the first time one was available in 10 languages in 98 countries. There were 114,000 live video streams, close to ten times as many as the last “Face to Face” event with popular LDS musician and YouTube sensation Lindsey Stirling.

Elder and Sister Bednar addressed questions common among youth of all ages and nationalities, such as how to stand up for personal beliefs and how to gain a testimony.

When asked a series of questions about what was “okay,” or not, Elder Bednar responded that baptized members have the gift of the Holy Ghost, which helps them to “figure that out for themselves.”

He taught that youth can get the answers to their own questions by studying principles and applying them. “If you get lined up on a correct principle, figuring out all the different applications is not that hard. And you don’t need someone else to tell you whether you should or should not.”

A young woman from French Polynesia asked about self-esteem and beauty. Elder Bednar held up his wife as an example of beauty, saying, “If you want to know what virtue looks like, it’s sitting right here, and that’s beauty. There is not another woman on the planet who is more beautiful than Sister Bednar, because of what is inside her.”

Mckell Vaughn, a 13-year-old young woman in the audience of the broadcast, said, “I loved it when he told us that we were individual daughters of God.”

Her sisters, Kacey and Erika, agreed that the broadcast was a “spiritual and amazing” experience.

“I didn’t realize that I needed to know the answers to the questions until I heard them today,” said Erika.

The Bednars recently celebrated 40 years of marriage. When asked about their love story, Sister Bednar stated, “We didn't just fall in love at first sight. … It took some time. People don't fall in love; you pick someone with whom you can create the love that you desire.”

Although Elder and Sister Bednar answered specific questions, they were able to broaden their answers to include the circumstances of youth worldwide. “I got my own personal question answered from what they said today,” said Lily Sheffield from Lehi, Utah.

Although Elder and Sister Bednar were not able to answer all of the questions that youth submitted, they encouraged them to continue striving to get their own answers. “You can get an answer to your question if you're prayerful,” said Sister Bednar. Youth can seek out answers to their questions and solve their doubts by pushing forward and focusing on the faith they already have, she said.

Youth, families, and youth groups can watch the archived event anytime at face2face.ChurchofJesusChrist.org. 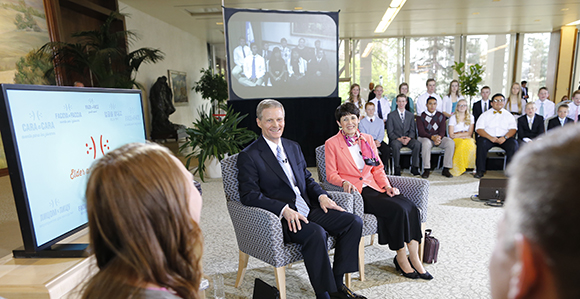 Youth hosts present questions to the Bednars that youth from all over the world submitted before and during the broadcast.

A seminary class in the Philippines interacts with Elder and Sister Bednar during the event. 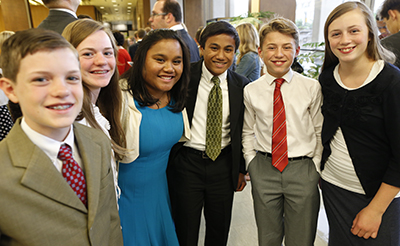 Youth from the audience at Church headquarters in Salt Lake City, Utah, pose following the event.