“This will be one of the most important times in my life, and it will be marked in my journal.” —Irvin, youth performer

Over and over again, Latter-day Saint youth in El Salvador repeated this statement as they practiced for a grand cultural celebration. Their effort came to fruition on Saturday, August 20, 2011.

Arriving in buses from all over the country, they gathered in the Gimnasio Nacional José Adolfo Pineda in the capital city of San Salvador to perform for their family and friends, for Apostles, and for the Lord.

More than 2,000 youth ages 12 to 18 danced and sang in a colorful, spirited program. Some sat in the audience and held up cards that formed mosaics of the country’s flag; the San Salvador El Salvador Temple; and a montage of the Christus statue, the temple, and the First Presidency. Others played in an instrumental ensemble.

These youth, from 17 stakes and 2 districts, united to express their faith and their exuberant joy that a prophet had come to dedicate a temple in their homeland. They performed 12 dances, one musical drama, and five hymns and songs.

President Henry B. Eyring, First Counselor in the First Presidency, presided at the event. His wife, Kathleen, was also in attendance.

Elder D. Todd Christofferson of the Quorum of the Twelve Apostles and his wife were also in attendance, as were Elder William R. Walker of the Seventy, Executive Director of the Temple Department; Silvia Allred, first counselor in the Relief Society general presidency; and members of the Area Presidency, Elders Enrique R. Falabella, James B. Martino, and Carlos H. Amado.

The youth received President Eyring with great enthusiasm, standing and waving their hats in the air, clapping and cheering. 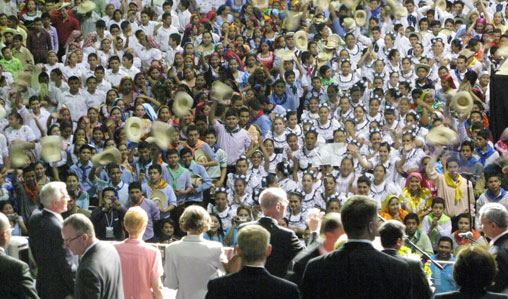 In speaking of their efforts to prepare for the program, several youth referred to well over 100 hours of rehearsals. Some stakes began their rehearsals six months before the performance.

They practiced at least once a week, sometimes two or three times a week, usually for two hours. For many, this came after going to seminary as early as 4:30 in the morning and attending school all day.

Members of the Los Héroes Stake told of one day during vacation from school when they spent the entire day practicing, battling extreme heat part of the day and heavy rain later on.

Behind the scenes, parents and Church leaders choreographed dances, taught and directed songs, sewed costumes, and offered continual support and encouragement. Óscar Zalaya, an adult who helped coordinate the event, spent some sleepless nights worrying about the program. “This assignment was not easy,” he said. “The event represented something that we had never done before.”

But after the performance, he said he would be able to sleep. He could see that the event had been a success when he saw both the tears and the smiles on the faces of the youth he had served.

President Eyring acknowledged the dedication of all who participated in the event. He said, “I know how hard you have worked. I am surprised that you don’t look tired. But you look happy.”

He helped participants understand that their Heavenly Father was also aware of their diligence. “God will reward you,” he stated. “I promise you that you will feel joy, as will those who see and hear your performance. They will remember the energy, the color, the music, and the feeling of this grand salute to your glorious and sacred heritage.”

The great worth of their effort came bit by bit, as they established lasting friendships that deepened as they worked together.

President Eyring echoed this sentiment during the program, when he told the youth, “President Monson is the champion of these events, which bring our people together and provide those who participate an opportunity to mingle with members their own age who share their standards, to make new friends, and to create memories that will last throughout their lives.”

The great worth of this effort was magnified as they youth came to understand why they were going to perform. Adán Campos expressed the sentiments of many others when he called it “a unique experience” that in a way they were dancing for the Lord.

This event, combined with the temple dedication that would follow the next day, came because of the diligence and faith of the pioneers among the Salvadorean Saints. President Eyring told of the first convert in El Salvador, baptized in 1951, two years after Latter-day Saint missionaries first arrived in the country. “That single convert,” he said, “has now grown to a Church membership of over 105,000. The temple, which will be dedicated tomorrow, stands as a monument to that growth and to your faith and dedication and testimony.”

Although in one sense the cultural celebration was a culmination of much hard work, it was also a beginning of great work to come. Before a dress rehearsal earlier in the day, Elder Carlos H. Amado of the Seventy and the Second Counselor in the Central America Area Presidency, told the youth that in El Salvador, the history of the Church would be divided into two parts: “before the temple” and “after the temple.”

He said: “You will be the leaders of the Church after the temple.” He assured them that their leadership would be even better than the great work that had been done in the past.

As the Latter-day Saint youth of El Salvador looked back on the experiences they had enjoyed in connection with the cultural event, they also looked ahead.

Irvin, who participated in one of the dances, told of what he would do so the experience would not fade from his life. “I write about many details of my life in a journal. Every time I read it, I remember many things. This will be one of the most important times in my life, and it will be marked in my journal.”

He said that his experiences with the cultural event had strengthened his testimony. “I know that Christ lives and that He loves us. I know that He is our Redeemer and Savior, and I know that the temple of San Salvador El Salvador is the house of the Lord, and that through Him, our families can be forever.”

These youth left the event prepared for a quieter but even more joyful experience the next day, when they would attend dedicatory services for the new temple in their homeland. They left prepared to follow the counsel they received from President Eyring: “May you continue to be faithful and true. May this beautiful temple be a beacon for members and all seekers of truth throughout this beautiful and promised land.”