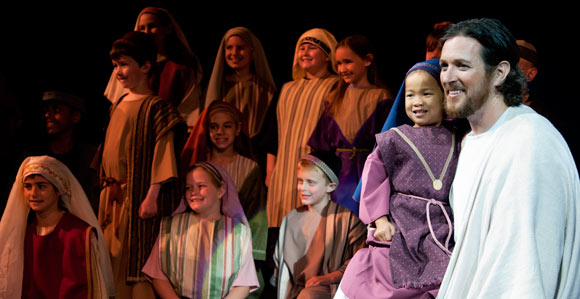 While turning their thoughts to the Savior in preparing for and performing in the Mesa Arizona Easter Pageant, young actors have found their testimonies of Him strengthened.

“My experience with the Easter pageant has really helped me gain a personal testimony of the Savior as an individual.  . . . As I’ve studied the scriptures and participated in the scenes, I’ve been able to have that personal relationship with Him.” —Kayla Partridge, angel

The Mesa Arizona Easter Pageant is the largest outdoor Easter pageant in the world, drawing more than 100,000 people over two weeks of performances and involving nearly 1,000 cast and crew. The youth who participate in telling the story of the Resurrection through speech, music, dance, and drama, have found that as they turn their thoughts to the Savior in preparation for the pageant their hearts have turned to Him as well.

“Through [the performance] we draw closer to Christ,” said Don Evans, president of the Mesa Easter Pageant. “It changes the lives of not only the audience, but of the pageant participants themselves.”

Tyler Pace, now 21 and a centurion in this year’s pageant, has played many roles over the years, including the character of a teenaged Jesus. The pageant brought him a deeper understanding of what the Savior went through, he said.

“I had a deep testimony of Jesus Christ,” he said. “But this is the only experience where I felt like I was experiencing His life. … It’s something that I will never forget.”

Lee and Carol Pace, Tyler’s parents, and their family loan sheep to the pageant each year, including a white lamb for the sacrifice scene. The family began participating in the pageant 13 years ago, when the seven children were all young.

Their son Michael said each year he participates, the pageant brings him a “wonderful feeling of peace and calm.” It’s “like my life has been somewhat realigned with the teachings of Christ,” he said.

Teen Armando Diaz, who is not a member of the Church, acted the part of a shepherd in this year’s performances. “No matter which religion is which, it feels as if we’re all gathered together as one,” he said.

Nick and Debra Parker’s daughter Meigan played a child in the multitude who got to sit on Christ’s lap and give Him a kiss on the cheek. She said she was excited to be in the pageant.

Her mother also sees the pageant as a valuable experience. “When our older children were younger, it seemed to me that Easter was becoming every bit as commercialized as Christmas,” Sister Parker said. “I wondered how I could help my children feel more what Easter was really about.”

Michelle Laparra, a youth who played a member of the multitude, recalled being in the pageant as a 12-year-old.

“A big part of me coming closer to Heavenly Father and feeling closer to Jesus Christ was because of the Easter pageant,” she said. “There was the ending scene where we come out and we are singing ‘I know He lives.’ I’d been praying and I felt with certainty that Christ lives and I was testifying it to everybody in the audience, and I knew that it was true.”

Another pageant participant, Kayla Partridge was an angel this year. She said her testimony has been strengthened as she’s participated in the pageant along with her family.

“My experience with the Easter pageant has really helped me gain a personal testimony of the Savior as an individual,” she said. “As I’ve studied the scriptures and participated in the scenes, I have [felt a more] personal relationship with Him.”