Duty to God Is a Way of Life, Elder Holland Says during BSA National Annual Meeting 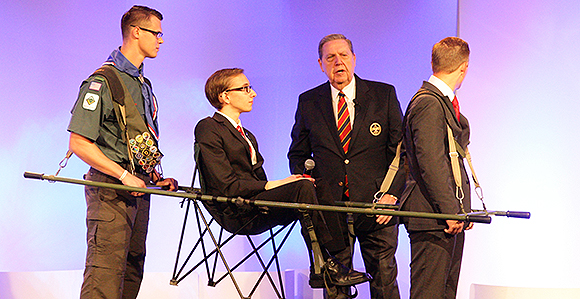 “Fulfilling one’s duty to God is a way of life. It is not just something we do; it is who we are—or perhaps more accurately stated, who we are becoming!” —Elder Jeffrey R. Holland of the Quorum of the Twelve Apostles

In his keynote address at the May 26 Boy Scouts of America Duty to God Breakfast, Elder Jeffrey R. Holland of the Quorum of the Twelve Apostles declared the importance of fulfilling one’s duty to the Creator.

“In a day when some people are using religious faith to divide the human family, this little gathering is a bold declaration that commitment to Deity can and should be a powerful, uniting force in this world,” he said to his audience of some 1,600 key BSA volunteers and professionals. “You are evidence that faith in God is not weaker, thinner, and less relevant in the public life. It is an honor to be counted among you.”

The Duty to God Breakfast is held each year during the BSA’s National Annual Meeting to highlight the organization’s continuing focus on faith. It was Robert Baden-Powell, founder of Scouting, who emphasized, “There is no religious side to the Scouting movement. The whole of it is based on religion.”

The breakfast began with a performance by the San Diego Martin Luther King Choir, presentation of the flag, and an invocation. Following the meal, several Scouts received religious awards, including boys from the United Methodist Church, Catholic Church, Lutheran Church, First Baptist Church and The Church of Jesus Christ of Latter-day Saints.

General Church leaders have served on the BSA’s National Executive Board since 1931 and set the leadership example emphasized by Elder Holland to Scout leaders in his keynote address.

“Surely, an important part of our duty to God is helping them fulfill their duty to Him.”

“Duty to God requirements are now part of all rank advancements as of 2016,” explained Paul Moffat, chairman of the Duty to God Breakfast. His announcement was followed by a round of applause. Chief Scout Executive Mike Surbaugh also announced the creation of a new National Duty to God Award.

The keynote address was then given by Elder Holland, a member of the BSA’s National Executive Board.

The Apostle spoke of the many challenges facing young men in today’s world. Modern technologies, he said, make life more comfortable—“but they also bring moral and spiritual dangers that can easily distract a young man from his duty to God.”

A battle is being waged between God and Satan for the minds and morals of young men — and the fight grows more intense each day. But Elder Holland said the Lord has sent “some of His finest children” for this day and has given them a duty to fulfill. He also sent many dedicated mentors and leaders to assist and influence those young men.

“Something stirs inside me when I hear a young man say, ‘On my honor, I will do my best to do my duty to God.’ An oath is a personal commitment, a personal vow, a promise to others and to the world that we will never falter, never yield, and never give up.

“You and I can help young men understand that when they start a sentence with the phrase, ‘On My Honor,’ they had better mean whatever they say next.”

And what is, asked Elder Holland, one’s duty to God?

“It is not just something we do; it is who we are—or perhaps more accurately stated, it is who we are becoming. It is at the core of our very identity. It defines us and affects every part of our lives—or should do so.”

The youth of the world are, by and large, wonderful people, he added. They are courageous, strong and anxious to do the right thing. They seek strong examples of those who exemplify duty to God.

“Let us strengthen their faith by living true to our own,” he said. “If there is anything this generation is demanding, it is transparency, genuineness, and integrity.”

The young men of Scouting take their flight into the future “with our thrust and with our aim.”

“And even as we anxiously watch that arrow in flight and we know all the evils that can deflect its course after it has left our hand, nevertheless we take courage in remembering that the most important mortal factor in determining that arrow’s destination will be the stability, strength, and unwavering certainty of the holder of the bow.”

Elder Holland shared the experience of young men in the Bountiful 15th Ward, Bountiful Utah South Stake, who did their duty to God by helping a fellow Scout. Mitchell Fennemore was born with spina bifida and, although he wanted to be fully engaged with the boys of his quorum, was limited in many physical activities. In a video presentation of the story, Mitch’s bishop, Verlyn Hawks, commented, “The challenge was to teach the young men that Duty to God has to translate into real actions.”

The boys caught the vision of action when fellow Scout Jonathan Knudsen proposed that a special contraption, lovingly named the “Mitch Mobile,” be built to carry Mitchell on hikes and other activities. Jonathan coordinated the design and building of the special chair as his Eagle Scout service project and soon the troop could carry Mitch with them wherever they went.

At the conclusion of the video presentation, and at the invitation from Elder Holland, Jonathan and fellow quorum member Sean Barnes came on stage carrying Mitch in the Mitch Mobile. They were greeted by a standing ovation from the appreciative audience. Both Mitch and Sean were wearing missionary name tags. Mitch is currently serving as a full-time missionary in the Family and Church History Headquarters Mission in Salt Lake City, and Sean is currently serving in the California San Diego Mission. Jonathan had recently completed his mission in the Belgium/Netherlands Mission.

“Fulfilling one’s duty to God is a way of life,” concluded Elder Holland.

Immediately following the breakfast, at the National Annual Business Meeting, Sister Jones was nominated and approved as a BSA Executive Board member; and her counselors, Sisters Jean B. Bingham and Bonnie H. Cordon, were nominated as members of the National Advisory Council.

During the week several members of the Church received important Scouting awards.

Hugh Redd of Great Falls, Virginia; Ken Gubler of St. George, Utah; and the late David Hedman of Ojai, California received the Silver Antelope Award for Scouting service on a regional level. Christine Perry of Medina, Washington, received the Silver Buffalo Award for her national service to the BSA.

Elder Holland also addressed a gathering of 300 Scouters at a reception on May 27, many in attendance were not members.

Mark Francis, LDS-BSA Relationships director, welcomed those in attendance and thanked them for their service to Scouting. He introduced leadership from both the Church and BSA who were in attendance including newly-elected National President Randall Stephenson, CEO of AT&T.

“Scouting and the Church are strong partners,” Mr. Stephenson noted as he addressed the crowd. “The role that the Church has played in Scouting cannot be overstated. What we both do together is vital to society, and Scouting is a critical and irreplaceable element of our society.”

Sister Jones also spoke and shared that Scouting had given her own sons “the opportunity to give service, have fun, and do hard things. I am overwhelmed with the love I have felt that you have for the youth. Thank you for making a difference in the lives of young men.”

Brother Stephen W. Owen, Young Men general president, spoke to the group and noted, “We are mentors to those coming behind us. My prayer is that these young men will be physically prepared and make decisions early in life. I’m grateful for the Boy Scouts of America and for The Church of Jesus Christ of Latter-day Saints. We need to strengthen each other.”

In his remarks, Elder Holland spoke of “duty to country.”

“These are challenging times,” he said, “The world needs the vision of The Church of Jesus Christ of Latter-day Saints and the Boy Scouts of America. Thank goodness they reinforce each other and follow parallel paths. We need these values more than ever.” 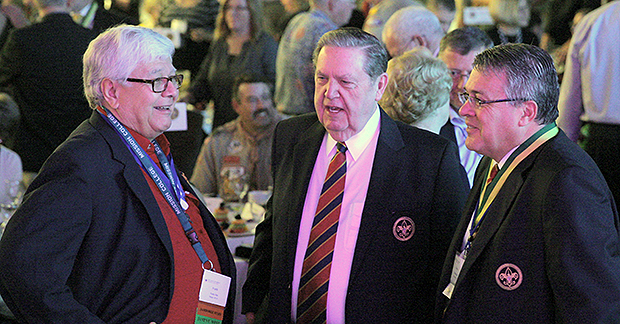 Elder Jeffrey R. Holland of the Quorum of the Twelve Apostles attends the Boy Scouts of America Duty to God Breakfast in San Diego on May 26. Photo by Lyman Kirkland. 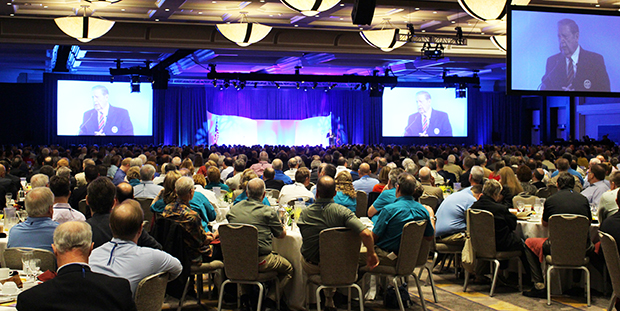 Elder Jeffrey R. Holland of the Quorum of the Twelve Apostles offers the keynote address at the Boy Scouts of America Duty to God Breakfast in San Diego on May 26. Photo by Lyman Kirkland.