Down About the News? Be Optimistic and of Good Cheer, BYU–Idaho Addresses Encourage 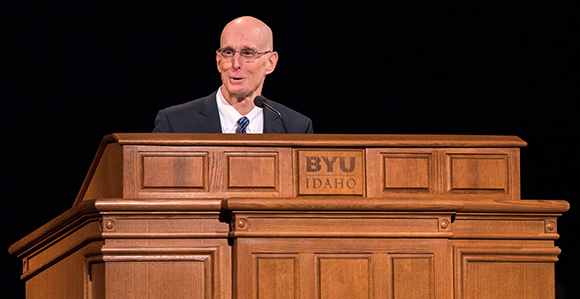 BYU–Idaho President Henry J. Eyring speaks about optimism and seeking to recognize miracles during the first devotional of the semester on January 8, 2019.

“As we strive to see the small but significant miracles and divine power given to us each day, our spiritual eyes will be opened to eternal realities, especially as we make a personal record of what we have been shown daily by the Holy Ghost. Almost immediately, our spiritual eyesight will grow sharper and our fears duller.” —Henry J. Eyring, BYU–Idaho president

Latter-day Saints are blessed with an optimistic view of the world, President Henry J. Eyring told BYU–Idaho students in a campus devotional on Tuesday, January 8.

“Miracles are occurring, not only at the level of governments and scientific discoveries but also in individual daily lives,” he said.

President Eyring said that based on news media reports and other messages received each day, one might naturally conclude that the world is becoming increasingly wicked and hostile.

This attitude even appears in two lines of a Primary song, “Follow the Prophet,” which he sang for the students: “Now we have a world where people are confused. If you don't believe it, go and watch the news.”

However, President Eyring said, “notwithstanding today's constant barrage of temptations and frightening news reports, on many dimensions our world is getting steadily and even speedily better.”

Infant mortality has decreased by 93 percent. Life expectancy in the U.S. has increased by about 30 years. Eighty-five percent of the world’s population is literate. The homicide rate in the U.S. fell by 50 percent between 1990 and 2010. While authoritarianism and slavery persist today, humans are treating one another better. More than 50 percent of people today live in a democratic country.

“People are now freer than ever before,” he said.

Among these social, medical, and technological strides is the growing strength of The Church of Jesus Christ of Latter-day Saints.

“The Restoration of the gospel of Jesus Christ is a boon to all people, even those who are unaware of its existence,” President Eyring said. “The Church is legally recognized in more countries than ever, with more members and more temples. Its doctrines can be studied in 188 languages.”

Ironically, some of the advances in this day have become a double-edged sword. For instance, an electronic device can be a tool to access gospel resources and education, but it can also ensnare one with mindless gaming or pornography.

The discovery of nuclear radiation is an advancement that also became means to wreak worldwide destruction.

President Eyring spoke of the 1962 Cuban Missile Crisis and the 13-day standoff between the Soviet Union and the United States when Soviet submarines were discovered off the coast of Cuba. While the confrontation was defused, a related story went unreported for 40 years—that a Soviet fleet officer declined to give his approval to launch his sub’s nuclear torpedo during a bombardment.

The officer had previously witnessed the radiation-poisoning deaths of more than 20 sailors that resulted from a coolant leak in a submarine’s nuclear reactor. Despite the bombardment threat to his men and likely military consequences, the fleet officer declined his approval.

Even when the incident first came to light at a missile-crisis conference, the leading news covering the conference didn’t mention the account, President Eyring said. “As this episode demonstrates, the news that really matters can be hard to find in the media. But it is all around us. And it is encouraging.”

Now, as President Eyring sings along with “Follow the Prophet,” in his mind he’s made some small changes to those two lines about news: “Now we have a world where tempters would confuse. If you want to prosper, don’t just trust the news.”

He added: “As we strive to see the small but significant miracles and divine power given to us each day, our spiritual eyes will be opened to eternal realities, especially as we make a personal record of what we have been shown daily by the Holy Ghost. Almost immediately, our spiritual eyesight will grow sharper and our fears duller.”

President Eyring’s wife, Sister Kelly C. Eyring, began the devotional by also speaking of optimism, sharing hope for the world and the beginning of a new semester.

Because of her past experiences with new beginnings, new semesters, new roommates, and such, “I love the chance to start again,” she said.

But, she added, “there will be some things you weren’t planning on learning and experiencing. So much will depend on how you decide to see those things.”

For example, when a family lost their home to Hurricane Michael in Florida, Kimberly Downs Norton said that due to so many trees being downed in her backyard, “We can see more of the stars at night now.”

“Can you believe her gratitude amid her loss?” Sister Eyring asked.

She testified that Heavenly Father and Jesus Christ desire to give everyone new beginnings. “In fact,” she said, “it is the Savior’s mission to make sure that we can have hope and happiness through His Atonement. … We can be of good cheer and optimistic because we know the Savior has overcome the world for us.”