“Dotting the Earth”: Entering an Era of New International Temples 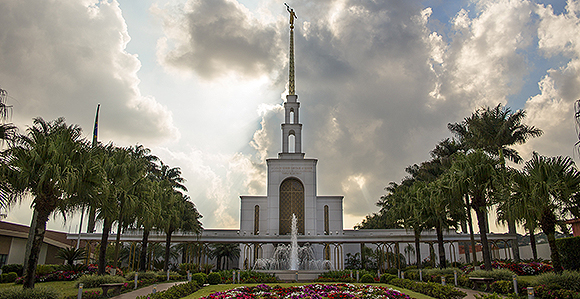 Simply put, The Church of Jesus Christ of Latter-day Saints has embarked on an unprecedented era of more international temples.

Of the Church’s 161 currently operating temples, 81 temples are located within the United States and 80 are located in other countries. But the last two temples dedicated in late 2018 were in South America—the Concepción Chile and Barranquilla Colombia Temples.

Those two are the start of an extensive and historic string of international temples to be dedicated over the next several years, given that the 10 temples in various stages of construction and next in line to be dedicated are all outside the United States.

And of the 30 announced temples still awaiting formal site designations and groundbreaking dates, 24 are located outside of the United States. In all, that’s 34 of the 40 future temples—85 percent—that will be beyond the U.S.

The numbers: 201 total temples scattered across six continents and 58 nations and U.S. territories.

The result is temples dotting the earth, the start of fulfilling the words of latter-day prophets who spoke of hundreds and even thousands of temples over multiple continents.

President Joseph F. Smith first used the phrase of temples “dotting the land”—referencing Europe during several conferences with members there in the early 1900s. Prophets and apostles since have echoed the “dotting” phrase, expanding it to not just North and South America and Europe but to the entire world.

That includes President Russell M. Nelson, who as a member of the Quorum of the Twelve Apostles nearly two decades ago underscored the doctrine—and dotting—of temples.

“As part of the planned destiny of the earth and its inhabitants, here our kindred dead are also to be redeemed,” he said in the April 2000 general conference. “Families are to be sealed together for all eternity. A welding link is to be forged between the fathers and the children. In our time, a whole, complete, and perfect union of all dispensations, keys, and powers is to be welded together. For these sacred purposes, holy temples now dot the earth.”

And as the first-year leader of the Church in 2018, President Nelson announced seven new temples in the April 2018 general conference and another 12 in the October 2018 general conference. A total of 19 temples—four in the United States, including Utah, Virginia, and California; and 15 others to be located in Argentina, Brazil, Cambodia, Cape Verde, Guam, India, Mexico, New Zealand, Nicaragua, Nigeria, Philippines, Puerto Rico, and Russia.

While 40 future temples might seem like a lot, it’s well shy of the push in 1998 to dedicate 49 new temples before the end of the year 2000 so that the Church could meet President Gordon B. Hinckley’s goal of 100 operating temples by the end of the 20th century.

Rather, the current increase is more international in nature—with 85 percent of the future temples to operate beyond U.S. borders.

And of those 40 temples under construction or planned, 15 will be the first in their respective nation or U.S. territory, including the expansive Russia, the populous India, and the remote islands of Cape Verde and Guam.

The table is set for an international focus of new temples, which started with last year’s dedications in Concepción and Barranquilla. The 10 temples designated as “under construction” are all outside of the United States, with three—the Rome Italy, Kinshasa Democratic Republic of the Congo, and Port-au-Prince Haiti Temples—already with dedication dates for the first half of this year.

The seven other temples underway include a pair in Brazil and one each in Portugal, South Africa, Peru, Côte d’Ivoire, and the Canadian province of Manitoba.

Two of the 30 “announced” temples have groundbreaking dates set for this month—the Urdaneta Philippines and the Bangkok Thailand Temples, again both international sites.

A historical look back

Organized in the state of New York in 1830 with its headquarters moving across the Midwest and reaching Salt Lake City in 1847, The Church of Jesus Christ of Latter-day Saints has been based in what is now present-day United States. International missionary efforts started in the Church’s first decade—within three years to Canada and seven years to Great Britain.

The first temples—no longer operating—were in Kirtland, Ohio, and Nauvoo, Illinois. With the move out West came what President Nelson has referred to as “pioneer temples” in Utah—temples in St. George, Logan, Manti, and Salt Lake City.

And in the truest sense of the word, those four temples were not built and dedicated in the United States but in the Utah Territory, all beginning operation before statehood in 1896. The Hawaii Temple in 1919 was also dedicated in Laie four decades before Hawaii’s statehood.

Dedicated in 1923, the Alberta Temple (later renamed the Cardston Alberta Temple) was the first outside of the United States and its territories, with the Swiss Temple (Bern Switzerland) the first in Europe in 1955 (with a temple in London, England, three years later). The first temple in the Southern Hemisphere came with the New Zealand Temple (now Hamilton New Zealand) in 1958, while the São Paulo Brazil Temple was the first in South America in 1978.

The 1980s saw the Church’s first concentrated effort of extensive international temple building, with 17 of that decade’s 26 temples located outside of the United States—five in Latin America, Asia’s first four temples, four in the Oceania area (Australia and the South Pacific), three more in Europe, and the first on the African continent.

With the July 1985 dedication of the temple in Stockholm, Sweden, the Church had for the first time as many temples outside of the United States as it did within—17 and 17. Five of the next six temples were built in international locations—South Africa, South Korea, Peru, Argentina, and Germany.

Only eight temples total were built in the first seven years of the 1990s before President Hinckley made his memorable end-of-the-century push with temples.

At the time of the April 1998 general conference, the Church had 51 operating temples—27 in the United States—with another 17 temples either announced or under construction for a total of 68 temples.

During that conference, President Hinckley announced plans for 30 additional temples—many of them a smaller size than previous temples. No locations were announced at the conference—just the number “30,” until the late Church President upped the number.

“I think we had better add two more to make it an even 100 by the end of the century, being 2,000 years ‘since the coming of our Lord and Savior Jesus Christ in the flesh,’” he said, quoting Doctrine and Covenants 20:1.

“In this program we are moving on a scale the like of which we have never seen before. … I can only add that when these 30 or 32 are built, there will be more yet to come.”

And the temples started coming—and not 30 or 32 but actually 34 between that conference and the end of 2000. Dedicated on October 1, the Boston Massachusetts Temple became the Church’s 100th, with two more—in Brazil’s Recife and Porto Alegre—dedicated in 2000’s final month, making it 102 total operating temples and a 51-51 split between U.S. and international locations.

Into the 21st century

Over the past five years, more U.S. temples came on line, especially during a 15-month stretch from August 2016 to December 2017 with temples in Philadelphia, Pennsylvania; Fort Collins, Colorado; Star Valley, Wyoming; Hartford, Connecticut; Tucson, Arizona; Meridian, Idaho; and Cedar City, Utah, coming on board, with the sole international temple being in Paris, France.

Which brings us to 2018, a current total of 161 operating temples in the Church’s history of nearly 189 years, and the Concepción and Barranquilla Temples starting this international surge in temple building.

Up to now, the longest string of international temple dedications came during the big push of 2000, when eight temples outside the United States were dedicated in succession in less than two months. From May 21 through July 16, temples were dedicated in Adelaide and Melbourne, Australia; Mérida and Veracruz, Mexico; Montreal, Canada; San Jose, Costa Rica; Fukuoka, Japan; and Suva, Fiji.

Before that, the longest stretch of consecutive international dedications were the five from June 1983 through May 1984—in Apia, Samoa; Nuku’alofa, Tonga; Santiago, Chile; Papeete, Tahiti; and Mexico City, Mexico.

It may be some time before the next new temple is dedicated in the United States, the last one being the Cedar City Utah Temple in December 2017. Six U.S. temples have been announced—for Saratoga Springs, Layton, and Washington County, Utah; Pocatello, Idaho; Richmond, Virginia; and Yuba City, California—but none has a site officially designated nor a groundbreaking date set.

And so it could be another several years­—or more—before the next temple is dedicated in the United States, if one looks at the timing of temple announcements, groundbreakings, and dedications of the last 10 years.

Timing over past decade

There is no set template for time between a temple’s announcement, groundbreaking, and completion, given all the varying factors such as property selection, architectural designs, approvals from local governing councils, construction issues, and the like.

Still, the time gap between the December 2017 dedication of the Cedar City Temple and that of the next new U.S. temple to be finished and dedicated may end up being one of the longest in more than a half-century.

Recently, two years passed between the dedication of The Gila Valley Arizona Temple on May 23, 2010, and the Kansas City Missouri Temple on May 6, 2012, during which four international temples were added in Cebu City, Philippines; Kyiv, Ukraine; San Salvador, El Salvador; and Quetzaltenango, Guatemala.

Before that, three years and four months passed between the Las Vegas Nevada Temple in mid-December 1989 and the San Diego California Temple in late April 1993, with only the Toronto Ontario Temple dedicated in that period.

With the Church’s bicentennial anniversary a little more than 11 years away and 40 future temples already on the books, reaching the 200-temple benchmark shouldn’t be a problem.

By then, even more temples—both in the United States and across the globe—will likely have been announced.

“Building and maintaining temples may not change your life, but spending your time in the temple surely will,” said President Nelson in the October 2018 general conference, echoing a similar sentiment shared six months previously.

And as he uses his ministry and devotional travels throughout the world to visit temple sites under construction or consideration as well as encourage temple preparation and participation, he underscores the need for these sacred edifices.

At the conclusion of his inaugural April 2018 tour that took him to England, Israel, Kenya, Zimbabwe, India, Thailand, Hong Kong, and Hawaii, President Nelson offered a succinct summary: “Everything we’ve done in these last few days together circling the globe could be summed up in two words—‘the temple.’” 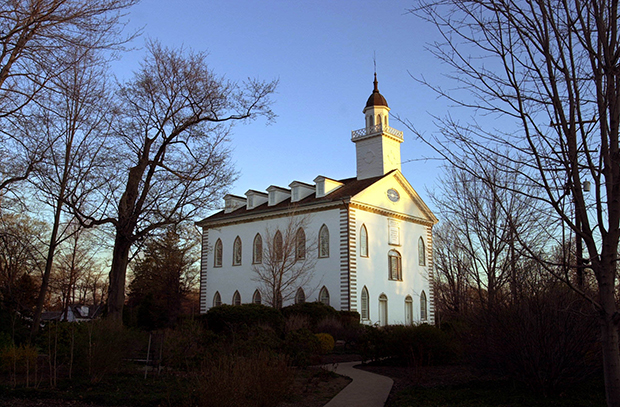 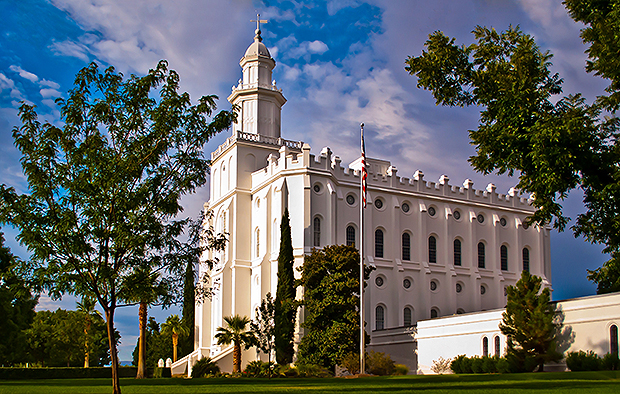 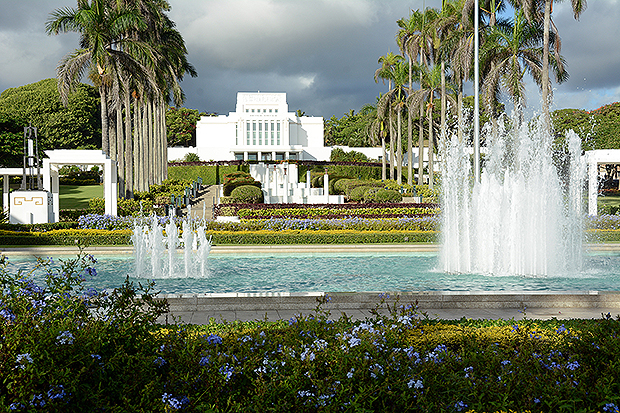 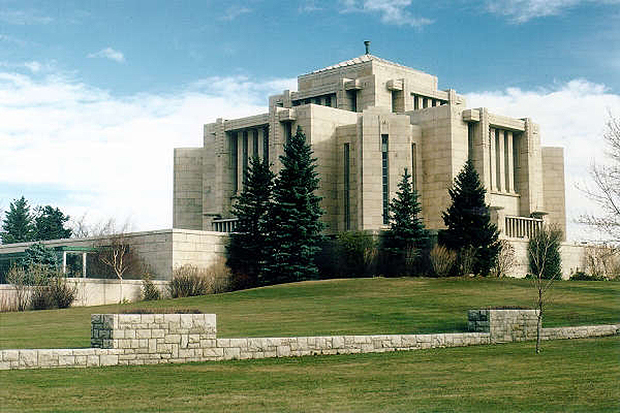 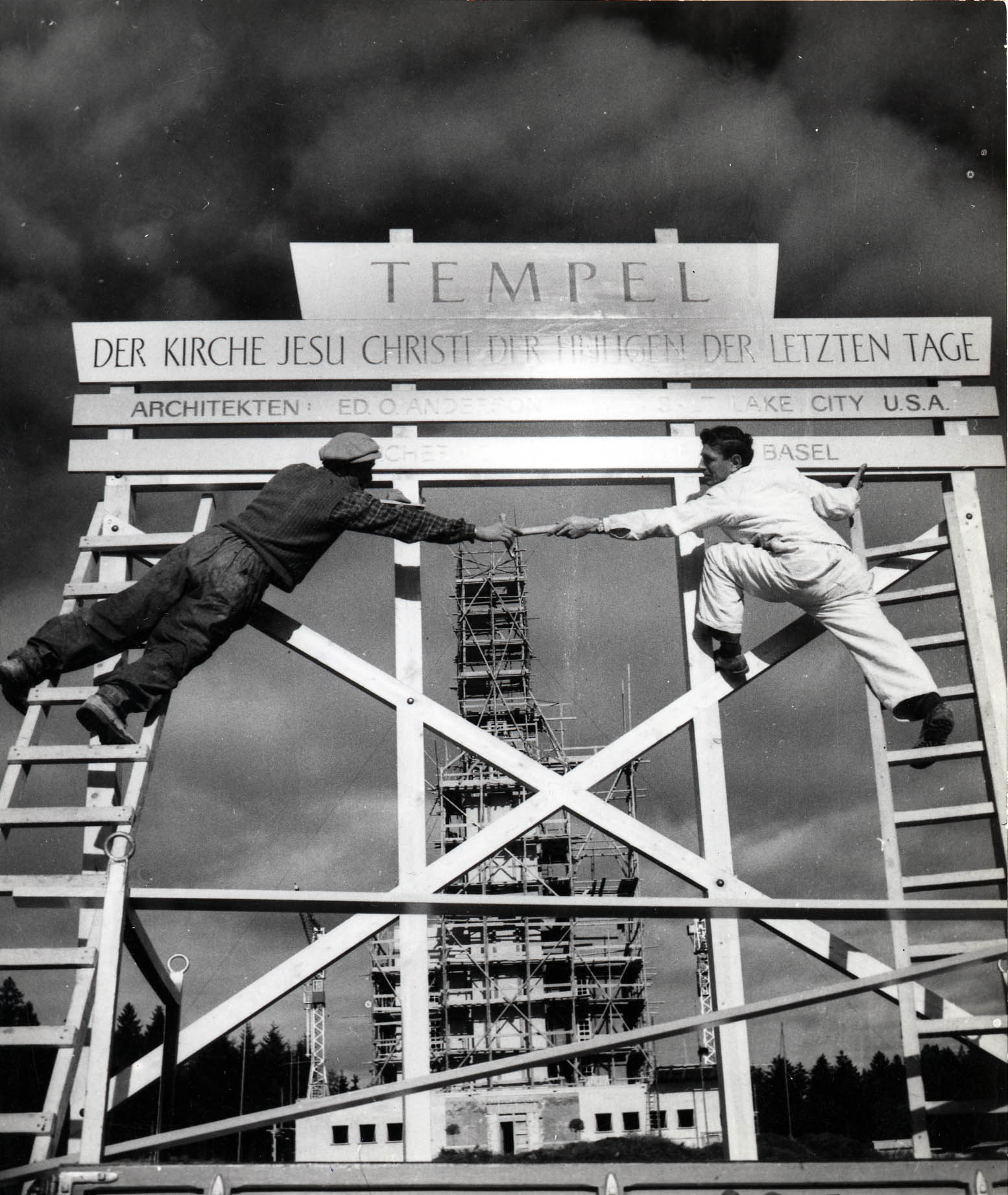 Workers put up a sign during construction of the Bern Switzerland Temple in the early 1950s. The Swiss Temple was the first in Europe and reaches a 60-year milestone this month. Photo courtesy of Deseret News archives. 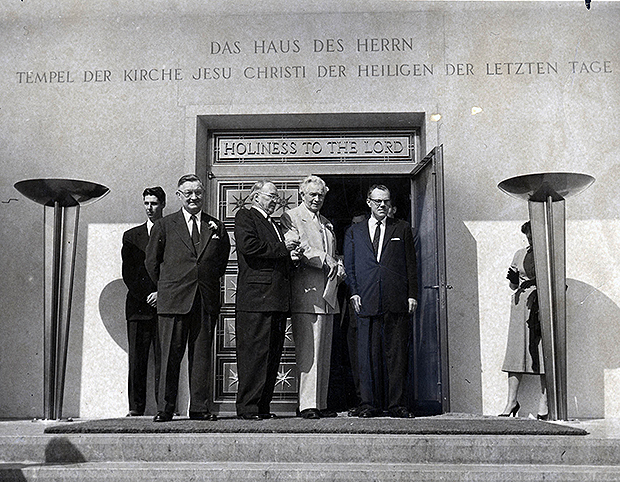 (Second from the left) President William F. Perschon of the Swiss-Austrian Mission; Elder Samuel E. Bringhurst, president of the new temple; President David O. McKay; and Elder Richard L. Evans of the Quorum of the Twelve Apostles leave the Bern Switzerland Temple following a dedicatory session on September 11, 1955. The Swiss Temple was the first in Europe and reaches a 60-year milestone this month. Photo courtesy of the Deseret News archives. 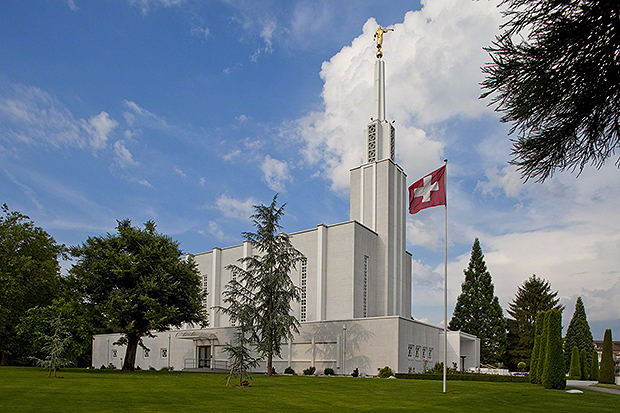 The Bern Switzerland Temple, the first temple in Europe, was dedicated in 1955 and remodeled in 1992. 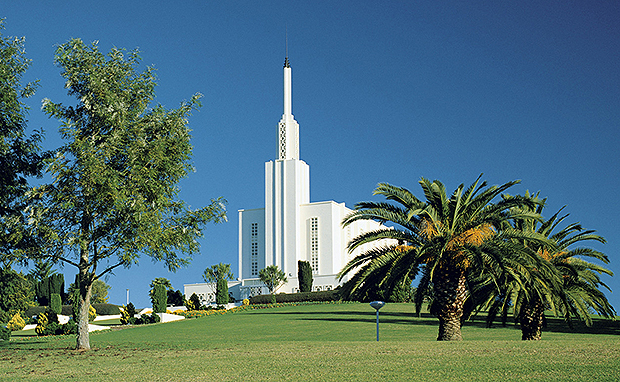 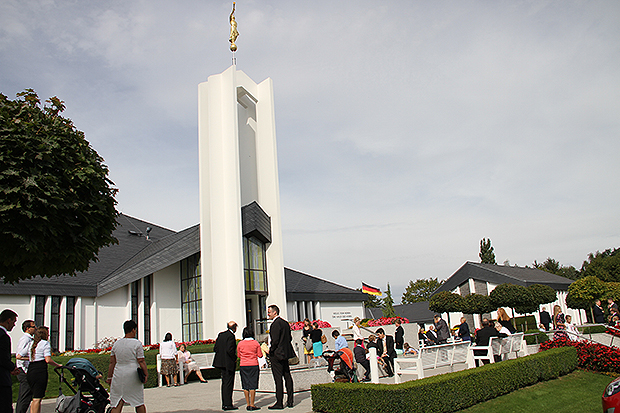 Members wait outside the Freiberg Germany Temple prior to the September 4, 2016, rededication of the historic edifice. Photo by Jason Swensen, Church News.