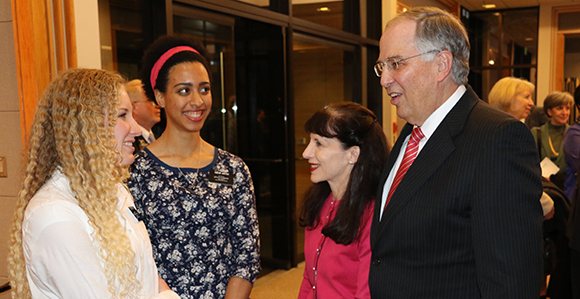 Elder Neil L. Andersen of the Quorum of the Twelve Apostles and his wife, Kathy, greet a pair of sister missionaries at the Provo Missionary Training Center following his remarks at the 2016 seminar for new MTC presidents and visitors' center directors.

“The Lord accepts our service and sacrifice as it is done unselfishly with ‘an eye single to the glory of God.’” —Elder Neil L. Andersen of the Quorum of the Twelve Apostles

In his January 12 counsel to newly called missionary training center presidents and visitors’ center directors and their wives, Elder Neil L. Andersen noted that each couple will serve in a unique assignment and perform unique duties.

Some will preside over missionary training centers filled with scores of young elders and sisters. A few will direct visitors’ centers in busy, high-profile tourist destinations—while others will serve in quiet corners of the world far removed from Church headquarters.

No matter, said Elder Andersen, a member of the Quorum of the Twelve Apostles. The Lord will accept equally the earnest offering of each new MTC president or visitors’ center director and his companion. It is the same of any calling in the Church.

During his remarks at the 2016 seminar for new MTC presidents and visitors’ center directors, the Apostle enlisted this universal doctrine taught earlier by President Gordon B. Hinckley:

The Lord, said Elder Andersen, does not regard the service and offering of, say, a General Authority as any greater than that of a Sunday School teacher who faithfully teaches a class of 14-year-olds each week.

Regardless of the visibility or so-called prominence of a calling, “the Lord accepts our service and sacrifice as it is done unselfishly with ‘an eye single to the glory of God.’”

The challenge, he said, “is to serve well where we are placed—and to do it the very best that we can.”

Elder Andersen then read these divine words revealed in Doctrine and Covenants 97:8: “Verily I say unto you, all among them who know their hearts are honest, and are broken, and their spirits contrite, and are willing to observe their covenants by sacrifice—yea, every sacrifice which I, the Lord, shall command—they are accepted of me.”

Elder Andersen thanked each couple for accepting their respective callings.

“You didn’t get to choose,” he said. “Your names were not put in a lottery. You were prayed over by the members of the First Presidency and the Quorum of the Twelve and you were found worthy and called of God.”

Don’t question “where you have been called,” he added.

“But think every day on how you will magnify that calling.”

Each person, regardless of their calling, “should be determined to build the kingdom of God on the earth and further the work of righteousness.”

Elder Andersen told the presidents and directors and their wives that they will face difficulties and challenges in their new callings. It is the nature of mortality. But none who serves the Lord serves alone.

“You will have answers to your prayers. Revelation will be real. You will not be alone. The Lord will watch out over you, and you will feel His hand and His influence in a very special way. He loves you. He knows you and He will be with you.”