Diverse General Women’s Session Choir to Include Many Refugees 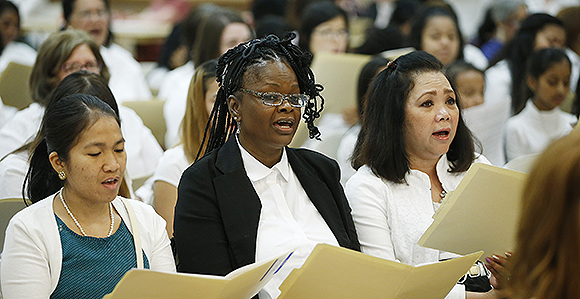 On March 26, some 350 sisters from different backgrounds and cultures will unite their voices to convey gospel messages as they provide the music for the general women's session of general conference.

“When the Spirit goes to the heart, that converts people. That changes lives. That heals hearts. This choir is perfectly positioned to do that all over the world.” —Lillian Severinsen, choir director

Rosette Bahati was born in the Democratic Republic of the Congo, but civil war caused her and her husband and their seven children to flee their home. For a time they lived in a refugee camp in Uganda until they were eventually relocated to Salt Lake City on June 26, 2006.

From her new home, Sister Bahati watched general conference for the first time. She noticed the choir sitting in the red plush seats in front of the gold pipes of the organ. She thought, “I know my English is not good, but I can try to sing.”

For nearly 10 years, “this was her righteous desire, the wish of her heart,” said Amy Wylie, who serves with Sister Bahati in the Parley’s Creek (Swahili) Branch, “to sing at general conference.”

Sister Wylie and her husband serve as refugee specialists in the Salt Lake Inner City Mission and assist in the branch, which is comprised mostly of refugees from East Africa. After Christmas 2015, Sister Wylie received an email stating that their stake was being asked to participate in a special choir. With joy, Sister Wylie was able to announce, “Sister Rosette, you’ve received the answer to your prayer. You’re going to be asked to sing at the general women’s session.”

“I was so happy,” Sister Bahati said.

Twice a year, stakes within access of Salt Lake City are chosen to organize a choir to perform in select sessions of general conference. On March 26, Sister Bahati will be one of about 350 sisters from seven stakes within Salt Lake City who will provide the music for the general women’s session. And, like Sister Bahati, most of the choir members originate from different countries—from Thailand to Mexico to Tanzania to Polynesia.

Dimitrina Bauman, a refugee from Bulgaria, recently carpooled to a choir practice with four sisters from her ward—one from South Africa, one from Brazil, and a woman and her daughter from Tonga. At the same rehearsal, Wendy Casperson, who serves as a service missionary in their ward and whose ancestors have lived in Utah for generations, chatted with sisters from Thailand.

“When you are sisters in the gospel, it becomes a small world,” Sister Casperson observed. “We are all daughters of God, no matter where we are born, and we are all of one heart and one mind when we are together.”

“I just love it,” Sister Bauman said of the choir. “I forget I’m from a different place. It’s been amazing coming together with so many sisters from other places.”

This year’s general women’s session choir is a microcosm of the worldwide Church. Since 1830, the Church has grown from six members in Fayette, New York, to 15 million members found in countries across the globe. There are now more members outside the United States than inside, and the Church publishes materials in 188 languages. 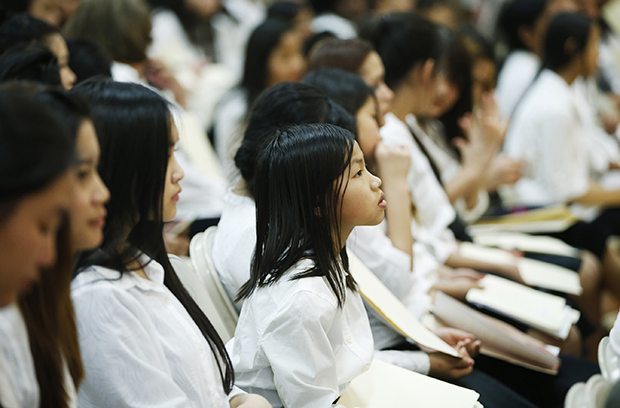 With women from 52 countries speaking 20 languages, the choir has provided not only the unique opportunity to unify many diverse voices but also has presented some unique challenges. “For a lot of the sisters, English is not their first language,” Lillian Severinsen explained. “Some don’t speak it at all.”

As the choir director, Sister Severinsen has been trying to teach roughly 350 sisters ages 8 to 88, many with little to no musical training, to memorize three songs—in English.

“It’s hard,” admitted Sister Bahati. In her branch, where she serves as Relief Society president, they have a few sisters who recently arrived from Africa. “They cannot speak English. We take a pencil and just point, word for word, to teach them and to show them. We try to help them practice on their own.” 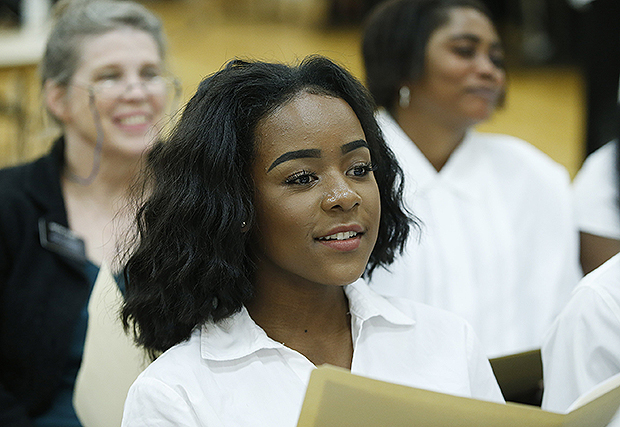 During their first rehearsal together, Sister Severinsen recalled, “I was so gung-ho by the time I actually got up to rehearse and interact with the choir. Several people had to come up to the stand and put their arms around me and say, ‘Sister Severinsen, please speak slowly. People are translating.’”

Since then, Sister Severinsen has tried to simplify her approach. “I have to say things slowly, repeat them three times, try singing, then say the exact same instructions again.”

She also uses a lot of facial expressions and hand gestures, such as demonstrating the placement of the mouth.

“One tricky thing has been finding people who sing harmony,” Sister Severinsen said. In some areas of the world, people don’t read music; they learn from rote. To teach them harmony, Sister Severinsen has had to go back to the basics.

Despite the challenges, “it’s coming together,” Sister Severinsen said, due in large part to “flat-out miracles” as those associated with the choir love and serve one another. 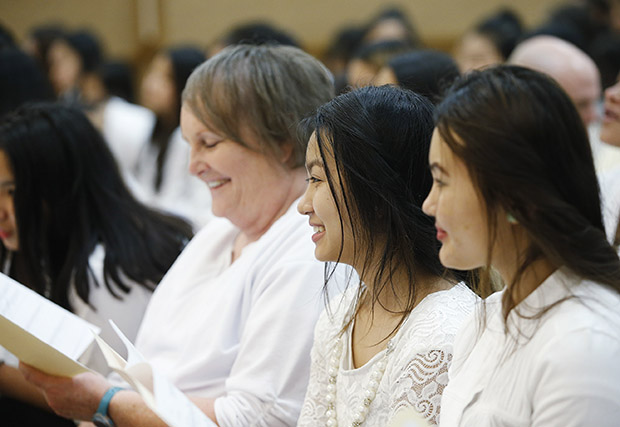 Service missionaries, for example, have been facilitating by providing rides to and from choir rehearsals, making meals for some of the sisters who head to rehearsal straight from their three-hour block of Church meetings, offering translation, and conducting extra choir practices within their ward and branch units to help non-English speaking sisters with pronunciation.

In addition to choir members and service missionaries, individual ward, branch, and stake members have volunteered support. For example, the Relief Society, Primary, and Young Women general presidencies decided on a simple universal dress code of a white blouse and black skirt for the performance. This represents the unity of all Latter-day Saint women.

Several sisters have helped collect and distribute clothing donations for the performance. Another sister recorded rehearsal tracks that choir members could listen to throughout the week.

“People have been tirelessly giving of their talents and their time,” Sister Severinsen noted. “Every time I ask someone, ‘Please pray for us.’ They say, ‘We are.’” 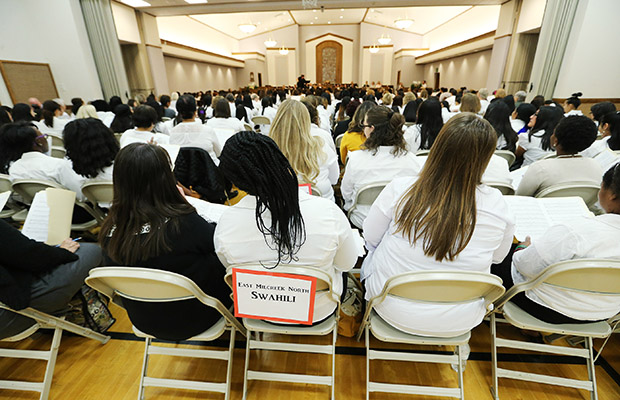 Members of the choir have devoted several hours every Sunday for weeks in addition to dedicating much of their personal time to learning the music. On fast Sunday, March 6, the choir fasted for heavenly assistance with the pronunciation and memorization of the words of the songs.

All the hard work—of the choir members and service missionaries and other volunteers—is an expression of faith.

“That’s why we’re all here,” Sister Casperson remarked. “It’s because we love the Lord.”

When Sister Severinsen thinks about performing in the Conference Center, she admits she’s nervous. But “the miracles outweigh the scary stuff,” she said.

“I know that Heavenly Father will be there for us, and I also know the sisters now. I’ve interacted with them. I’ve seen their faces, and I’ve heard their voices and testimonies. I’ve seen them interact with family members within the choir, and I just know that they will be blessed because of all their hard work.”

Many of the sisters have endured unspeakable hardships—witnessing genocide and experiencing displacement and deprivation. “The Savior has suffered for their pains. There is such a sacred spirit about this choir because there are little children that have been rescued from death multiple times who are now singing about the Savior. It’s very, very powerful, and it is sacred,” Sister Severinsen said. 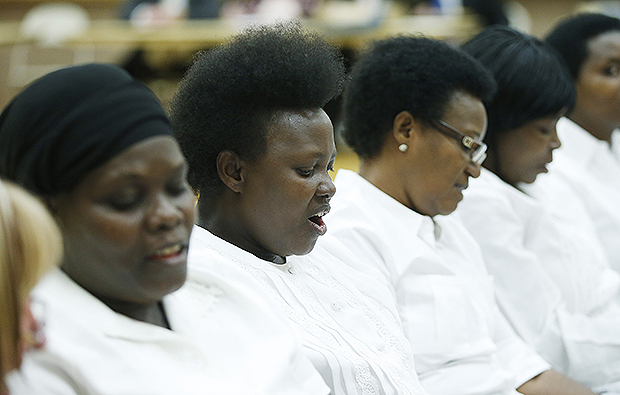 Before the choir’s first rehearsal, Sister Severinsen was invited to sing one of the songs for the general auxiliary presidencies’ approval—a new medley of “I Am a Child of God” and “Love One Another.” During that meeting, Sister Linda K. Burton, Relief Society general president, counseled Sister Severinsen to tell the choir to “sing to the one,” to sing to the one sister who needs them.

“That individualized perception is so powerful,” Sister Severinsen said. “When the Spirit goes to the heart, that converts people. That changes lives. That heals hearts. This choir is perfectly positioned to do that all over the world.”

Sister Bahati said she hopes as sisters in the gospel everywhere listen to the choir, they will feel the happiness choir members feel as they participate. “We feel good and we feel the Spirit,” she said. “We feel love.”

The choir’s message is in the songs, Sister Bauman added. “It’s like the song says. If we love one another, we’re going to do good things and help each other. That’s what [the gospel] teaches you—just love.” 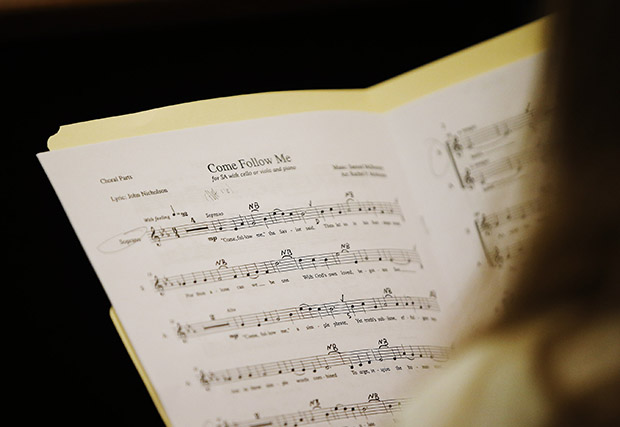 A singer holds sheet music during a special choir practice for the upcoming general women's session of the 186th annual general conference of the Church. Photo by Jeffrey D. Allred, Deseret News. 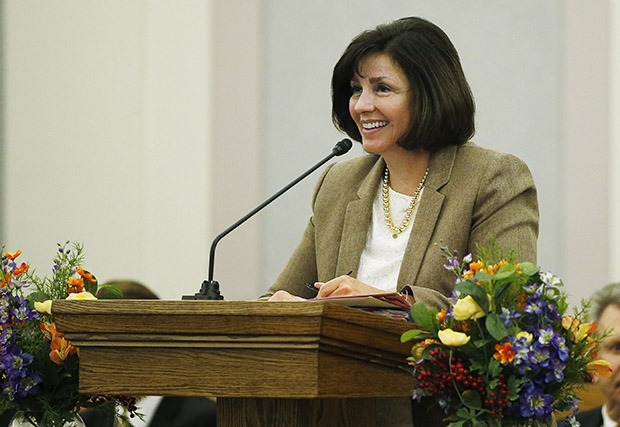 Sister Carole M. Stephens, first counselor in the Relief Society general presidency, speaks during a special choir practice on February 28 for those who will sing during the general women's session of the 186th annual general conference. Photo by Jeffrey D. Allred, Deseret News. 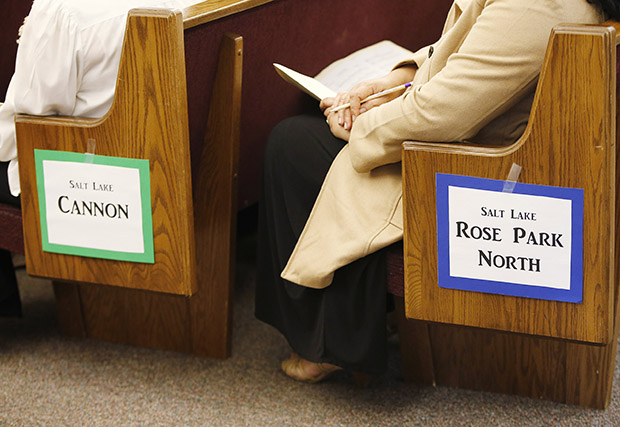