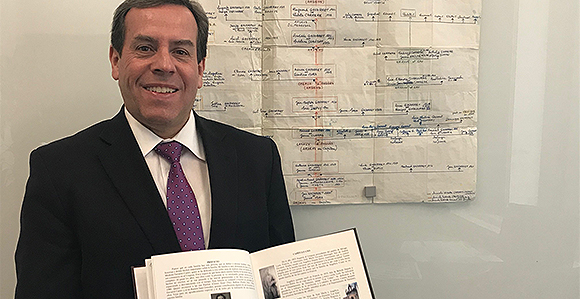 Elder Eduardo Gavarret of the Seventy holds a book with his family history while standing next to a large poster showing his family tree.

“We want everyone to have that discovery experience, because that is what changes their hearts. That’s what we are trying to do. Then the rest will come automatically.” —Elder Bradley D. Foster, General Authority Seventy

Elder Bradley D. Foster says he has a “death wish,” but it’s not the sort you might think.

By all indications, Elder Foster, General Authority Seventy and Executive Director of the Family History Department, loves life and is not in any hurry to depart this mortal sphere.

But he realizes that one day he, like everyone, will have lived out his life.

“When that day comes, when I get up there, I miss my mom and dad and I’ll be anxious to see them,” he said. “And I’ll hug Grandpa Sauer, who came over from Germany when he was 12, with his mother, Katerina, who joined the Church in Germany.”

It wasn’t easy, Elder Foster added. “She left and brought those two boys over here. She’s the one that brought the gospel to me. Whatever I am it’s because of her.”

Such stories can be part of most everyone’s legacy, said Elder Foster and four other General Authority Seventies, leaders in the department who were interviewed not long before the beginning of RootsTech 2018, the annual family history and technology conference that goes through March 3 in the Salt Palace Convention Center in Salt Lake City.

They emphasized a new credo in the Family History Department that will be emphasized repeatedly: discover, gather, connect.

“Everybody deserves to be remembered,” Elder Foster declared, saying that the joy coming from the experience of discovering, gathering, and connecting with one’s ancestors will be offered in coming months to Church members through the ministry of local temple and family history consultants.

“Our emphasis for the coming year is to help the consultants see their role in helping members to have this experience. We do that one by one. We go to them wherever they are, with a special emphasis on those who are turning 12 and those who are new converts.”

Even those who are not members of the Church can have the discover-gather-connect experience through one-on-one assistance in any of more than 5,000 FamilySearch family history centers worldwide.

“RootsTech is an open door for those who are not members of our Church,” said Elder Eduardo Gavarret, General Authority Seventy and an Assistant Executive Director in the Family History Department. “They find in this event elements that will help them not only to build their family tree but to connect with their ancestors in a way they cannot understand completely, but there is something that guides them to do that.”

With particular responsibility over family history and temple work in the Hispanic world, Elder Gavarret expressed excitement with the emphasis at this year’s RootsTech on the Hispanic culture.

Elder Gavarret said he gained his testimony about family history and temple work when he was a 16-year-old priest in Uruguay. He displayed a “book of memories,” stories of his family.

“Initially it was only oral until we convinced our aunt, who kept those stories jealously guarded in her mind, to write them. This is the result. Thanks to these stories, I found a link between my family in Uruguay and my relatives and ancestors in France.”

Elder Edward Dube, General Authority Seventy and another of the Assistant Executive Directors in the department, spoke of his early experience in his homeland of Zimbabwe learning to cherish his own family history.

Before passing away, his father took him on a trip to the village where he was born, ostensibly to search for some lost cows. But it turned out to be a family history journey, as the father introduced the son to people who remembered the boy’s birth. They remembered that the father had given him the nickname Kwashirai, which, in the Shona language, means “searching.”

“That was the last experience I had to sit one on one with my father,” Elder Dube reflected. “After that, I was called to his deathbed in the hospital. I tried desperately to just get one more word from him, but that was that. So, I say the Lord really had a hand in this, his taking me to those areas and introducing me to those people.”

For Elder Erich W. Kopischke, General Authority Seventy and another Assistant Executive Director, the new credo of discover, gather, connect is an approach he welcomes.

“It’s not enough to just plunder the tree,” he said. “It’s not enough just to go and chase green icons,” a reference to the symbol on the family tree on the FamilySearch website indicating that a member of one’s ancestry is in need of temple work.

Elder Kopischke’s family conversion story and his own experience with it illustrates this.

His father was a 9-year-old growing up during World War II in what is now Poland. He had a friend a year younger named Otto Dreger, who took him to a tiny branch of the Church where, in wartime conditions, there were no missionaries. There were only a few old people (mostly women) and children, as the men were serving in the war.

“And so, my dad loved it so much that he went to his mother, sister, and father, and they all came to church,” Elder Kopischke recounted. “On the 26th of September 1942, the whole family was baptized. There was not one missionary involved. It was just Otto that brought them to church and his grandmother.”

Recently, while typing at his computer, translating the story from German so it could be published, Elder Kopischke heard a voice whisper, “Go look him up.”

He had thought Otto had perished in a bombing raid during the war. But he heeded the prompting and found Otto under an alternate spelling of Dreger and learned he was living in California.

“Now, I have contact with him and his wife,” Elder Kopischke said. “We have visited each other; we have discovered each other. … That’s the buddy that brought my father to church. … And so now I’m working with them on their family history.”

Elder Scott D. Whiting, General Authority Seventy and another Assistant Executive Director, remembers as a boy seeing his grandmother work on family history and bequeathing the legal-size books of remembrance to family members.

“It wasn’t until I was married and had my own children that I started to understand the significance of my connection with my past and started to develop a passion, particularly for my pioneer ancestors,” Elder Whiting said.

“I wanted to know what drove them. I certainly stood on their legacy of faith, and I wanted to know what it was that caused them to leave the comforts of their own home in various parts of Europe and cross with great hardship to join a small band of believers—to come to the Great Salt Lake Valley, then be assigned to go even further down to Manti, for example, and settle there.”

That connection, he said, has now turned into not only memories but a desire to seek after and do temple work for his kindred dead, “whether it be linear, whether they be cousins, bringing them the same blessings my pioneer ancestors brought me.”

Elder Foster remarked, “We want everyone to have that discovery experience, because that is what changes their hearts. That’s what we are trying to do. Then the rest will come automatically.” 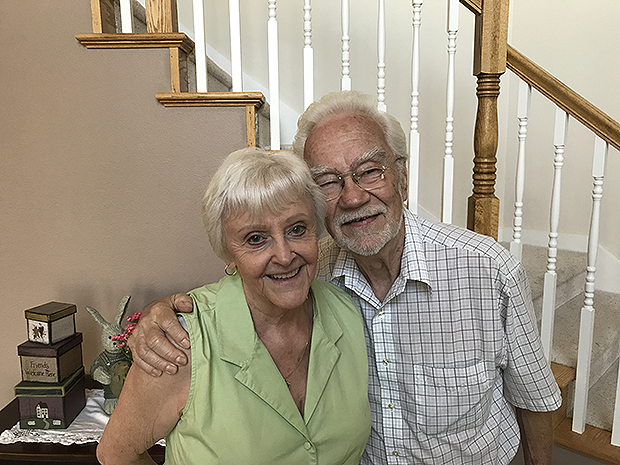 Elder Erich W. Kopischke was able to find Otto Dräger in California, several decades after Dräger had invited Elder Kopischke’s father to an LDS Church in Poland. Dräger is seen here with his wife. Photo courtesy of Elder Kopischke.