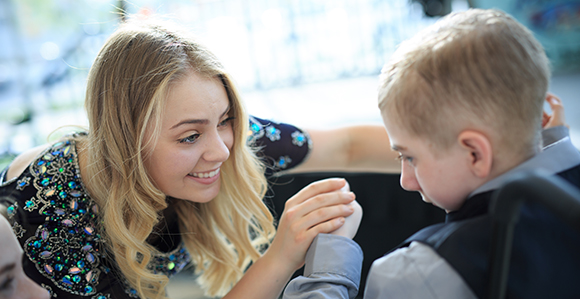 “The job of helping any of God’s children, whether they have a disability or not, extends to all of us.” —Katie Steed, disability specialist manager

It took about six months after her son’s diagnosis for Danyelle Ferguson to tell people he had autism.

A happy, snuggly child with “this beautiful laugh,” he was two years old when he was diagnosed on the severe end of the autism spectrum.

But when Ferguson told her son’s nursery leader about his diagnosis, the leader’s response was, “No, he doesn’t have autism. You just need to love him more.”

“It totally, totally broke my heart because he was my first child. I adored this child,” Ferguson said.

Ferguson is the cofounder of a nonprofit that supports a preschool for children with autism. She is also the coauthor of the book (dis)Abilities and the Gospel: How to Bring People with Special Needs Closer to Christ and has traveled the country speaking on how to help people with cognitive disabilities be successful at church. Her son is now 19 and serving a two-year Church-service mission at Church headquarters in Salt Lake City.

Still, those early years may have been easier if someone had been advocating for her son, helping him receive accommodations, and communicating with Church leaders about his needs.

But with the creation of the stake and ward disability specialist calling, that type of person now exists.

It’s also “a really powerful opportunity for us to do good and make sure that we reach out equally to all God’s children,” said Anna Rast, who has been the stake disability specialist for the Valencia California Stake since 2014.

Rast’s son and daughter were both diagnosed with autism when they were each four years old. She said the Church’s youth programs are “amazing” but can be difficult for children with autism due to large amounts of unstructured social time and sometimes chaotic atmospheres.

Prior to the creation of the disability specialist calling, Rast would ask her children’s leaders for accommodations—a particular roommate at youth conference for her daughter, for example—but was often told if exceptions were made for her children, they would have to be made for everyone. As a result, she didn’t always require her kids to attend activities if they were already overstimulated from school.

“It was decently discouraging for me as a convert and as a young mom,” Rast said.

So when she heard about the new disabilities specialist calling, “I thought, ‘This will make a difference for so many families,’” she said.

Kelley Grandy, a mom from Arkansas with two kids with special needs, has felt that difference firsthand. Her 11-year-old son has Down syndrome and her 9-year-old son has autism. Shortly before her younger son’s eighth birthday, he began having violent, 10- to 12-hour-long meltdowns.

Grandy said they couldn’t go anywhere—simple things like putting her son in the car and picking him up from school resulted in meltdowns. There was even a six-month period where attending church meant catching a few minutes of sacrament meeting or Relief Society, and she felt the impact of that on her relationship with her husband, on her family, and on her testimony.

“As you stop doing the things that you’ve always done, you kind of lose a little bit of yourself,” she said.

Grandy began asking for a ward disability specialist around Christmas of last year. Prior to their ward getting a disability specialist, Grandy felt like it was entirely her and her husband’s responsibility to train their children’s teachers and leaders on working with their sons, which became frustrating when those teachers and leaders were then released from their callings after only a few months.

“We just felt isolated,” she said.

But when a disability specialist was called in their ward, “instantly there was a difference,” Grandy said. “The work that she was able to get in and do was such a blessing to our family.”

Their ward disability specialist reached out to teachers, set up trainings, and met with families to learn about their children’s needs. She also talked to the bishopric about leaving teachers in their callings longer so they could build relationships with Grandy’s sons.

Though their disability specialist was only in the calling for several months before she moved out of the ward, “I just felt like the brief respite that we had … was enough to kind of get me back on my feet and help me be aware that the Lord really does know who we are,” Grandy said. “I feel like I can go forward again.”

The disability specialist calling doesn’t only benefit Church members—it impacts the entire community. For example, under the direction of her local priesthood leaders, Rast’s stake runs support groups that continually see more nonmembers in attendance. The faith-based groups don’t proselytize, but they also don’t steer away from religious conversation.

“Merging what we have to offer with the community is one of the best parts of the calling,” Rast said.

Grandy has also seen the impact in her community, where there’s a high special needs population and people on local Facebook groups often ask, “Where is a church that is aware of kids’ special needs?”

“If the disability specialist were a calling in all wards, I feel like more families would feel comfortable recommending [the Church] to their friends or acquaintances,” she said.

The calling naturally comes with its difficulties. For example, Rast feels it’s been challenging helping people understand how to use people in her calling; this is partly because of how new the calling is but also because people are sometimes shy or in denial about their conditions.

That’s why Rast is adamant they’re there for everyone.

“You don’t have to have a technical disability. If you have an aspect of a Church activity or Church meetings that you struggle with, come see us,” she said.

Further, the Church handbook states, “Leaders and members … should never suggest that a disability is a punishment from God. Nor should they suggest that it is a blessing to have a child who has a disability.”

Despite this, Ferguson said she’s been told many times that having a child with disabilities is a blessing; though she understands people are well-meaning, it still makes her angry sometimes.

“They have not experienced all the intense challenges and everything that comes with it, or the emotions that I go through,” she said.

In addition, Ferguson feels special needs children could receive more help transitioning into young adulthood. While young adults traditionally move on to work, school, or other opportunities after high school, she said people often forget that a young adult with special needs has graduated.

“They really need to receive callings, and they need to have a purpose at church,” Ferguson said. This means making new friends, being reached out to, and generally being treated as an adult.

Rich Humpherys, who was recently released as the first counselor in the Bountiful Utah Orchard Stake presidency, said leaders can support the disability specialists by inviting them to ward council at least quarterly.

He also said it’s important that Church leaders stay sensitized to the special needs in their wards and stakes.

“It’s a continual effort to keep that type of information and [those] resources available,” he said.

Rast said the number-one way members can support disability specialists is by helping people know what accommodations are available.

For example, her stake offers a “sensory-friendly room” during stake conferences where regular reverence rules don’t apply. She’s found members will reach out to families who don’t often come to stake conferences because of disabilities, letting them know about the sensory-friendly room. Beyond that, simply giving a smile and letting families who are struggling know that help is available can make a great difference, Rast said.

The Church handbook also states, “Many members with disabilities can serve in nearly any Church assignment,” and Humpherys said those with special needs should be involved as much as possible.

“We as leaders have to give special attention to ways that we can allow those with special needs to participate in a meaningful way,” he said.

And Ferguson said it’s important not to get hung up on doing things the “right” way. “It may not be that they know how to do [something] perfectly, … but it’s the way that they can do it, and it still blesses everybody else,” she said.

Although accommodating special needs can require sacrifice, Rast said those sacrifices can sometimes make the difference between someone attending a church function or not. 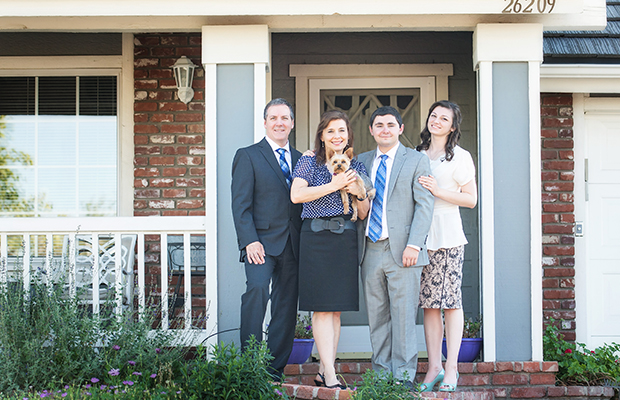 From left: Alan Rast, Valencia California Stake disability specialist Anna Rast, Kevin Rast, and Kirsten Rast. Keven and Kirsten are autistic and were given a low chance of ever speaking when they were children; however, Kevin served a two-year mission and Kirsten recently graduated from BYU–Idaho. Photo courtesy of Nikki Pollard.

The disability specialist calling certainly isn’t limited to traditional disabilities; Savage said their ward disability specialist has addressed issues such as bullying, suicide, self-worth, and elderly people’s needs. Grandy also said issues like wheelchair accessibility and adult-sized changing tables in meetinghouses are concerns within the special needs community that could still be addressed.

In addition, Rast began the “Stake & Ward Disability Specialists - Church of Jesus Christ LDS” Facebook page about two years ago. The page is not only for stake and ward disability specialists or even just for Church members; it’s for anyone even interested in knowing more about the calling. Since last March, the page has grown from 300 members to over 800 members, and Rast accepts “100 percent of people” who request to join.

“One thing I love to say is that we’re just offering free help. … Our job is the nuts and bolts of including everyone,” she said.

And for Savage, the disability specialist calling is inspired, and he’s grateful for the tools the Lord has provided.

Katie Steed, disability specialist manager for the Church, said, “The job of helping any of God’s children, whether they have a disability or not, extends to all of us. The role of the disability specialist can help facilitate some of these relationships, but in the end the greatest support will come from every member lifting where they stand.” 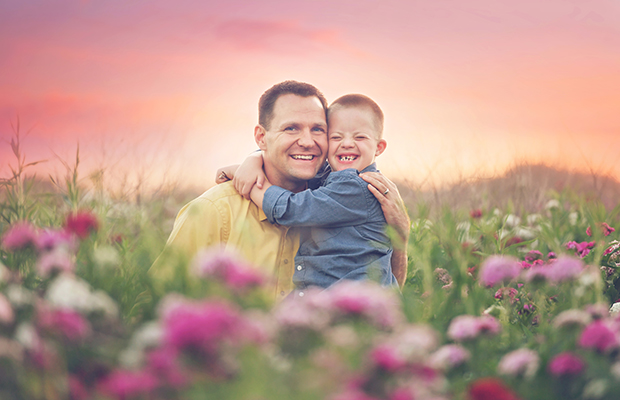 Ben Grandy, right, hugs his dad, Scott Grandy. Ben is 11 and has Down syndrome. Photo courtesy of Jessica Fuhriman. 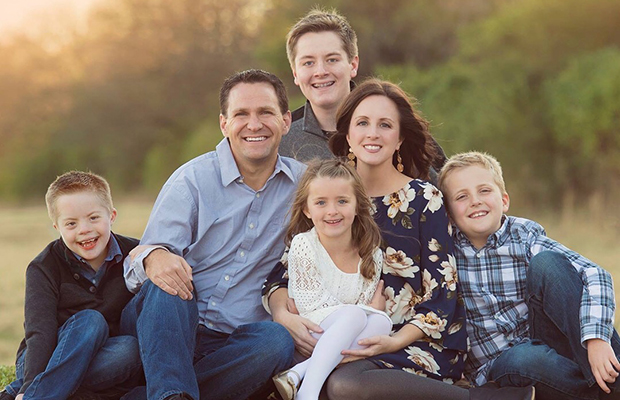