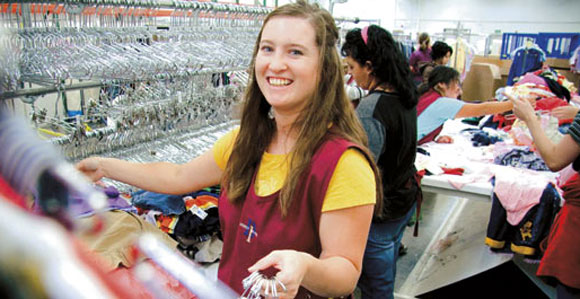 Many recognize Deseret Industries as a thrift store, but it’s also a place where associates have the opportunity to partner with local businesses to get on-the-job training in their field of interest.

“The beauty is that the associates get to do something they actually want to do. . . . You name the occupation, and we can make a partnership.” —Danny Brock, founder and manager of Deseret Industries’ Business Partnership Program

Ariela had just immigrated to the United States from Peru, and although she spoke English and Spanish and had a college degree, she was unfamiliar with the work environment in the United States and felt unsure about finding a job. Her bishop suggested she work with Deseret Industries (DI), a nonprofit, vocational rehabilitation facility that doubles as a thrift store and is sponsored by The Church of Jesus Christ of Latter-day Saints.

Soon after beginning work at her local DI, Ariela enlisted in DI’s business partnership program, where she was able to have an internship-type experience at a local government justice service company that taught her basic business procedures. She soon felt comfortable with her career skills and was able to find permanent employment.

Ariela’s is just one of thousands of success stories that have come out of the business partnership program.

The program exists at each of DI’s 43 locations as well as at 12 employment centers—3 of which are in Mexico, the Philippines, and Haiti. After obtaining a referral from a local LDS bishop, those interested in the program should contact their local DI or LDS employment center.

In this program, DI partners with local companies to allow associates to train in their field of interest. It’s a win-win-win situation: DI fulfills its mission to help people help themselves by paying the associate’s wages, liability, and workers’ compensation; the company receives an employee resource free of charge; and the associate receives pay and training. Many partnerships end with a job offer or recommendation.

In 2004, Danny Brock of Bountiful, Utah, USA, was called to serve as the mission president of the South Africa Durban Mission. Leaving his job as vice president of Aladdin Industries, Brother Brock and his wife, Kelly Lynn, spent three years serving the missionaries and people of South Africa.

“I’d come home so excited and tell my family, ‘Hey, I got this stake president or this bishop a job!’” he said. “And my boys would ask, ‘Well, why don’t you get one?’”

Inspiration struck when he put the work he was doing at Welfare Square together with his service as a mission president. While serving in Africa, Brother Brock noticed that when some of the missionaries returned home to unemployment and poverty after the scheduled, hard-working days of missionary service, it was hard on them. Many had trouble keeping the commandments and became less active.

He realized that if he could arrange a job for the missionaries as soon as they returned home, they became leaders in their units and communities, they married, they stayed out of trouble, and they were successful.

“Employment and work makes it so we can not only pay bills, but also so we can meet our other obligations—like tithing—and we can help others,” Brother Brock said. “When you don’t feel like you’re doing good, it can really throw you for a loop. Work is one of the best ways to stay out of trouble, and you sleep better at night because you feel like you’ve contributed and accomplished something.”

Under that principle, Brother Brock helped network and find jobs for those coming to Welfare Employment Services, and in 2008, the Presiding Bishopric of the Church gave approval for him to begin DI’s business partnership program.

Why It's a Win-Win-Win

Today, nearly 1,500 people have been placed in business partnerships through DI. Roughly half of those have been hired into full-time, benefit-paying jobs. Eight out of every 10 placements are done with companies that have partnered with DI in the past.

“At first businesses want people to come because it means free help,” Brother Brock said. “But after a while, they . . . decide what they really like is being able to help someone.”

Before entering the business partnership program, DI associates are rigorously screened and evaluated, cleared for work, and instructed in character, work habits, and business relationships to ensure they are capable and informed.

Many companies that are regular partners have even allowed DI access to their specialized training programs so associates entering the partnership can hit the ground running, fully trained.

“The beauty is that the associates get to do something they actually want to do,” Brother Brock said. “Dog grooming, contracting, bookkeeping, welding, medical assisting—you name the occupation, and we can make a partnership.”

Besides the increase in skills, the certifications, and the financial benefits, he said, the program supplies the emotional benefits of fulfilling dreams and providing prayer-answering opportunities for both those in the program and the employers.

“Every day I get to help people go to work, to relieve someone from bondage,” Brother Brock said. “I get to see [people] find hope and happiness, and I see the Lord’s love for His children.”