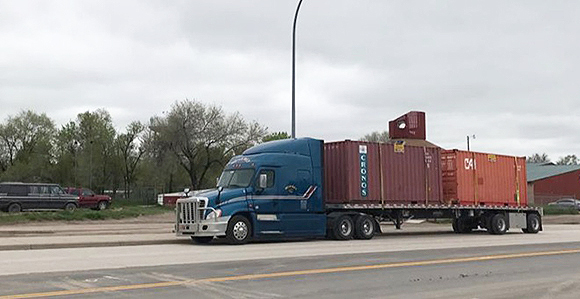 A Deseret Industries truck laden with clothing, shoes, and other supplies arrives at the Pine Ridge Indian Reservation in South Dakota.

To say living conditions on South Dakota’s Oglala Lakota Sioux Pine Ridge Reservation are akin to a Third World nation may be an overly positive comparison.

Many of the challenges facing the reservation are identical—and in some instances even more desperate—to that of the world’s poorest nations.

The statistics are staggering: Unemployment on this reservation of about 30,000 inhabitants hovers near 90 percent. Men are not expected to reach their 50th birthday. And the annual household income is about $3,500.

Perhaps most troubling is the alarmingly high infant mortality rate and the reservation’s staggering rate of teen suicide—particularly among young women.

“If Pine Ridge were a country it would be the poorest in the world,” said Twila True, a Lakota Sioux who spent part of her childhood on Pine Ridge.

True counts herself among the fortunate from her tribal nation.

She escaped many of the troubles that define Pine Ridge and has built a successful life in the business world. She is a philanthropist, a wife, and a mother. But her love for her people and their potential remain.

She founded the True Sioux Hope organization with a vision to deliver opportunity and hope to her people.

Now she counts the Church’s Deseret Industries as a key partner.

True’s connection to the Church began with, well, a couple of Mormons. Through her organization’s charitable efforts, she became acquainted with Latter-day Saints Kelli Brienholt and Stacy Brimhall.

The two were well aware of the challenges on Pine Ridge. When they learned True Sioux Hope was hoping to open a much-needed thrift store on the reservation, they put the organization in touch with Church welfare officials.

“We knew we could help,” said Brienholt.

Last January, organization leaders traveled to Salt Lake City to meet with Deseret Industries officials. They discussed their shared goals to help others realize self-reliance, explored their options, and decided to work together on the Pine Ridge thrift store.

“Once the Church understood that we had a plan and a building and that we had something that was sustainable and replicable, they not only joined our [effort], they have become our number one supporter,” said True.

More than a store

Soon plans were underway to combine resources and open the thrift store by Memorial Day. The 5,000-square-foot store is located in the heart of Pine Ridge and shares a parking lot with other True Sioux Hope-sponsored properties.

“Our goal for the thrift store was not only to offer goods and services, but to provide a nice environment to be in,” said Beverly Moore, an administrator at True Sioux Hope. “Without the help of the Deseret Industries, this store would not have been possible. We are eternally grateful for their support.”

Two Deseret Industries tractor-trailers arrived at the store prior to the opening. The trucks were filled with shelves and other equipment needed to set up the store—along with several containers filled with clothing, shoes, and household items that would become the store’s maiden inventory.

“We had all we needed for a successful grand opening,” said Peele.

The thrift store has been well received across the community. It’s also provided essential jobs to several residents, who have received Deseret Industries-sponsored training.

“Plus, most of the items on sale at the thrift store can’t be found anywhere else on the reservation,” said True. “To find these same items you would have to drive to Rapid City, which is 100 miles away. And many people on the reservation don’t have a car.”

The holiday grand opening was a marked success.

The benefits of the Church’s partnership at the thrift store stretch beyond reasonably priced household items and even job training and placement. It’s a signal that folks care about the residents of Pine Ridge and their future.

It’s hoped that the success of the thrift store extends beyond Pine Ridge. The Deseret Industries plans to provide additional self-reliance training on the reservation and continue to contribute store items.

True added she envisions such efforts being replicated in other Native American communities. 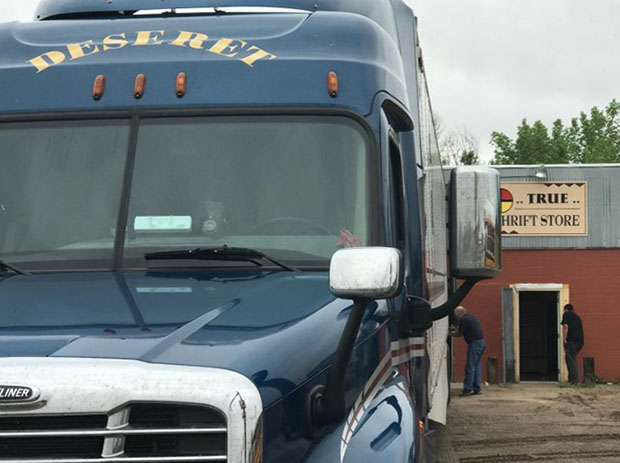 A Deseret Industries truck delivers clothing and other supplies to the recently opened thrift store on the Pine Ridge Indian Reservation in South Dakota. The Church is assisting the thrift store with supplies and training.