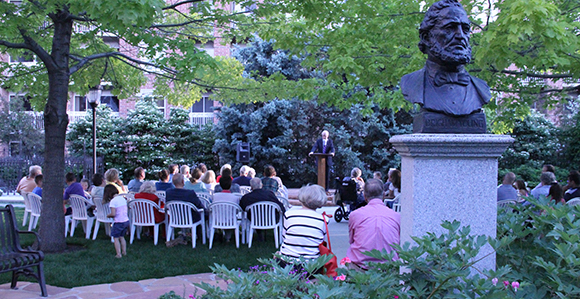 Elder Larry Y. Wilson delivers an address at the birthday celebration of President Brigham Young held by members of the Brigham Young Family Association at his grave site in Salt Lake City on June 1, 2016. A bust of President Young is in the foreground.

“‘Mormonism’ has done everything for me that ever has been done for me on the earth; it has made me happy; … it has filled me with good feelings, with joy and rejoicing.” —Brigham Young

Several of President Young’s estimated 30,000 descendants gathered with family members for the occasion at the Mormon Pioneer Memorial Monument at 140 East 1st Avenue, directly east of the Church Office Building in Salt Lake City. Also known as the Brigham Young Cemetery, it is a private park containing statuary and the grave sites of 11 Mormon pioneers, including President Young and some of his wives and children.

Himself a great-great-grandson of President Young (his middle initial stands for Young), Elder Wilson said, “What he accomplished in the space of his 75 years of life is truly monumental.”

Who was Brigham Young?

Elder Wilson began with a physical description of President Young: well-built, in later years portly, 5 feet 10 inches in height (which would be somewhat taller than average for his day), with light brown hair that had very little gray in it.

“He was clean shaven until the 1850s, when he began wearing a beard,” Elder Wilson said. “His dress was neat and plain, often homespun. He combined vibrant energy and self-certainty with deference to the feelings of others and a complete lack of pretension. With blue, penetrating eyes and a firm mouth and chin, he was generally composed and quiet in manner, although he could thunder at the pulpit.”

He said President Young’s earlier career was as a painter, glazier, and master carpenter. “It foreshadowed a lifetime as a many-faceted builder.”

Elder Wilson spoke of being in the Kirtland Temple in Ohio just over a year ago, which today is in the possession of the Community of Christ. “They still credit the windows in there to Brigham Young as they take you through on the tour.”

He quoted Brigham as saying he believed all his life that what was worth doing was worth doing well. “In later years, as the nature of his work changed from glass, paint, and wood to souls, words, and organizations, he would continue this focus on honest, reliable, and enduring results.”

His journey in the restored gospel

In 1824, he married Miriam Works, Brother Wilson recounted. After the births of two children, she contracted tuberculosis and became a semi-invalid, cared for attentively by Brigham.

“The year of the Church’s founding, 1830, turned out to be of great consequence for Brigham,” he said. “That spring, Joseph Smith’s brother Samuel passed through the part of New York where Brigham was living and gave a copy of the newly printed Book of Mormon to Brigham’s older brother Phineas. The book passed from Phineas to his father, then to his sister Fanny, and then to Brigham. While impressed with the book, Brigham exhibited his characteristic practicality by saying, ‘Wait a little while; I want to see whether common good sense is manifest.’

“Two years later, Brigham and all of his immediate family were baptized and remained loyal Latter-day Saints throughout their lives.”

Miriam died a few months later, and that fall of 1832, Brigham moved to Kirtland, Ohio, where he met Joseph Smith.

In Kirtland, he met Mary Ann Angell and married her in 1834 (her grave is in the same cemetery as Brigham’s). She took charge of his two children, and they subsequently had six of their own.

During that year, he participated in the Zion’s Camp march, intended to assist the Saints who had been driven from their homes in Missouri.

“He later called it ‘the starting point of my knowing how to lead Israel,’” Elder Wilson recounted. “The Lord was providing him with a tutorial in leadership.”

Elder Wilson traced President Young’s life sequentially, speaking of his call as an Apostle in 1835; his directing the evacuation of the Saints from Missouri to Illinois while the Prophet Joseph Smith was imprisoned; his missionary work with others of the Twelve in England; his acceptance of the divinely given principle of plurality of wives; his weathering the succession crisis following the martyrdom of the Prophet; his leading of the thousand-mile exodus of the Church from Nauvoo, Illinois, to the Salt Lake Valley; and his establishment of settlements and building of temples in the Great Basin.

“One of Brigham’s best non-Mormon biographers, Morris R. Werner, opined that Brigham saved the Church from disintegration at Joseph Smith’s death,” Elder Wilson noted. “But he did so, in Werner’s view, because of personal qualities he possessed independent of anything he acquired through Mormonism.

However, Brigham’s view was exactly the opposite. He wrote: “‘Mormonism’ has done everything for me that ever has been done for me on the earth; it has made me happy; … it has filled me with good feelings, with joy and rejoicing. Whereas, before I possessed the spirit of the Gospel I was troubled with that which I hear others complain of, that is, with, at times, feeling cast down, gloomy, and despondent; with everything wearing to me, at times, a dreary aspect.”

A man of good character

Elder Wilson quoted a reminiscence from Church President Heber J. Grant, who in his youth knew Brigham Young: “From my childhood until the day of his death, I approached Brigham Young with perfect ease and assurance and knowing that I should be received kindly as though I were going to my own father.”

He concluded with President Young’s self-assessment: “When I think of myself, I think just this: I have grit in me, and I will do my duty anyhow.”

“I leave my witness that Brigham Young was one of those raised up by God for a special purpose to build the latter-day kingdom in preparation for the return of the Messiah,” Elder Wilson testified.

In introductory remarks, Richard Lambert, family association president, displayed a photo of an early home where Brigham Young lived in Port Byron, New York, the locale where he met his wife Miriam. The home was purchased last year and donated to the Mormon Historic Sites Foundation, which will in turn transfer it to a nonprofit corporation being formed for upkeep of the structure and making it a historic site for visitors. Descendants were asked to contribute to a fund to pay the $15,000 cost of a historic survey preliminary to making the structure a historic site. 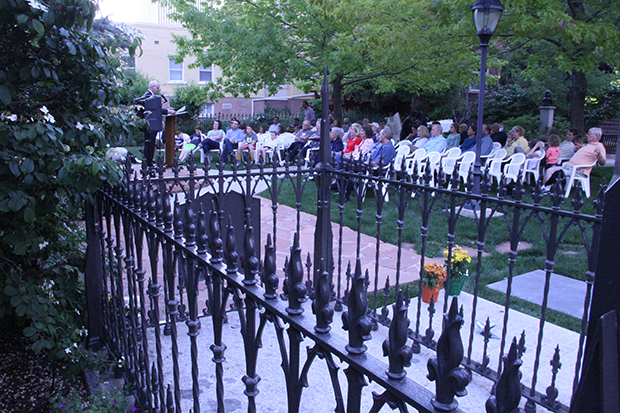 The grave site of President Brigham Young is in the foreground as Elder Larry Y. Wilson delivers an address at President Young’s birthday celebration June 1, 2016, held by members of the Brigham Young Family Association. Photo by R. Scott Lloyd. 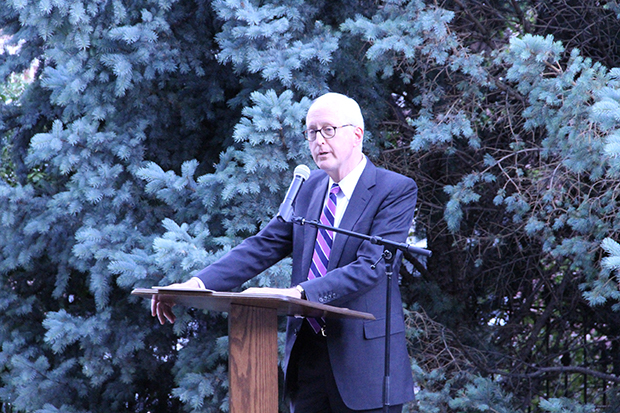 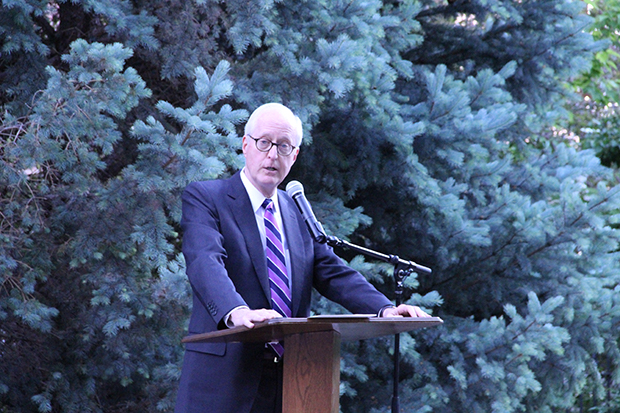 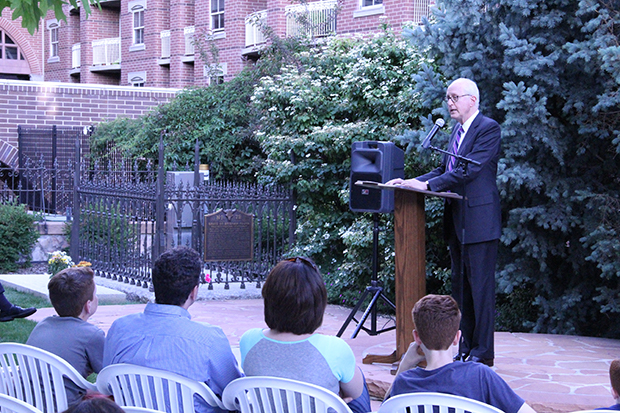 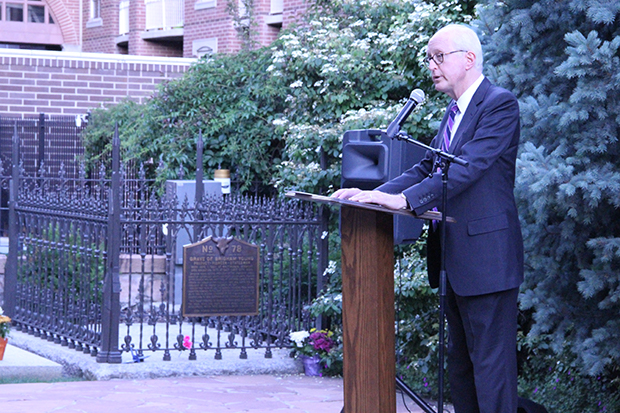 Elder Larry Y. Wilson delivers an address at a birthday celebration of President Brigham Young held by members of the Brigham Young Family Association at his grave site in Salt Lake City June 1, 2016. President Young's grave is in the background. Photo by R. Scott Lloyd. 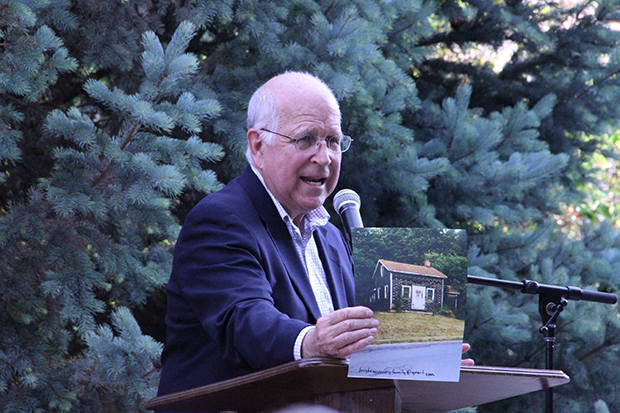 Richard Lambert, president of the Brigham Young Family Association, gives opening remarks at a celebration of President Young's birthday and displays a photo of an early home of Brigham Young, constructed in 1818 in Port Byron, New York, purchased in 2015 and donated to the Mormon Historic Sites Foundation. Photo by R. Scott Lloyd. 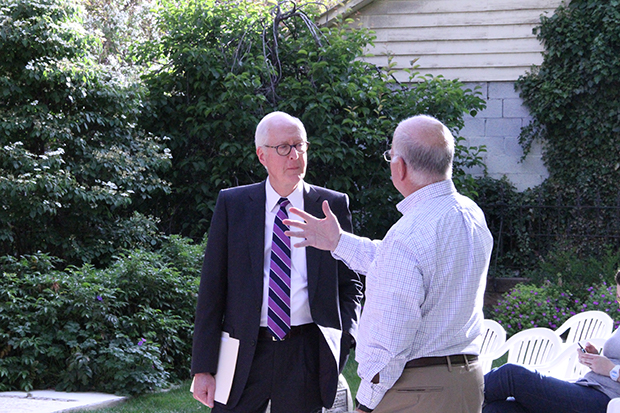 Elder Larry Y. Wilson, left, converses with Richard Lambert, president of the Brigham Young Family Association, prior to giving a speech observing President Young's birthday near his grave in Salt Lake City on June 1, 2016. Both men are descendants of President Young. Photo by R. Scott Lloyd.