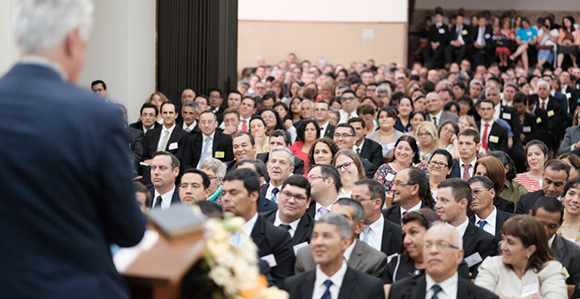 An audience of priesthood and women leaders enjoys listening to instruction from Elder Dieter F. Uchtdorf at a stake center in Montevideo, Uruguay.

When Elder Dieter F. Uchtdorf sat down a few days ago with the Church News, he was approaching, in airline speak, the final leg of his travels in Uruguay and Chile.

In the days preceding that last evening of his recent South America assignment, he had worshipped with scores of fellow Latter-day Saints, been interviewed by a noted Chilean journalist, prayed for peace with Santiago’s ranking Catholic leader in this still unsettled capital city, testified alongside a missionary companionship during a teaching appointment in an investigator’s humble home, and even endured a minor dental mishap that allowed him, serendipitously, to comfort a Montevideo family in need.

But if the 79-year-old member of the Quorum of the Twelve Apostles was beginning to tire, he hid it well.

The next day would be unforgettable, he told the Church News with trademark enthusiasm. He would spend Saturday, February 15, in a Santiago stake center filled with missionaries and local Church leaders who shared his commitment to build the Church in Chile.

And Sister Harriet Uchtdorf—the woman he often calls “the sunshine of my life”—would be at his side.

“We are deeply impressed by the strength of the Church here,” he said. “The Latter-day Saints are solid, dedicated, good-looking, and very friendly and open. . . . With no fear, they ask questions concerning their own lives.”

Technology, of course, allows for real-time communication between Church headquarters and the far corners of the world. But nothing, said Elder Uchtdorf, equals being with Latter-day Saints and missionaries in their home countries. Nothing can match the connections found by trading handshakes, sharing a few “abrazos,” and engaging in prayerful, face-to-face discussion.

“We like to get close to the people and want to know about their country, their circumstances, and their hopes.” 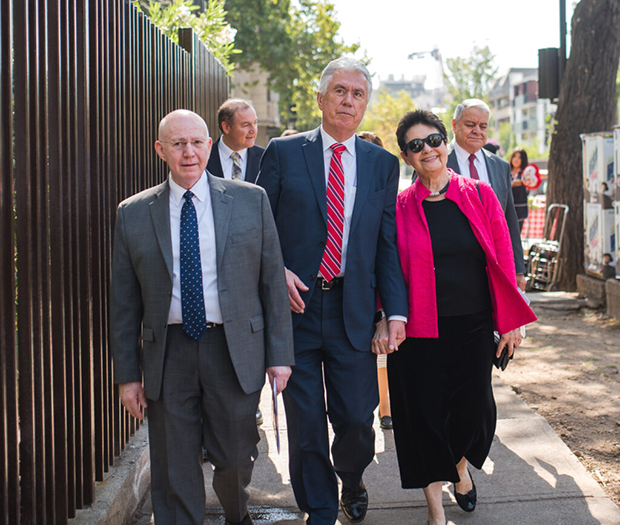 Elder Dieter F. Uchtdorf and Sister Harriet Uchtdorf enjoy the temple grounds after visiting the Church offices in Santiago, Chile, during their recent February 2020 tour of Chile and Uruguay.

As a man whose life has been largely defined, professionally and ecclesiastically, by his global sojourns, Elder Uchtdorf knows well the first lesson of travel: expect the unexpected.

“And as soon as I arrived in Uruguay,” he said, “I lost a tooth inlay.”

But a bit of good fortune was, well, smiling on Elder Uchtdorf.

Local leaders in Uruguay introduced him to a Latter-day Saint dentist who operated her Montevideo practice out of her home. The Uchtdorfs stopped by her office in between their Sabbath-day meetings in two different wards.

The dentist and her husband, they learned, were the parents of six children, including a seven-year-old daughter with special needs named Emma, who was in the hospital recovering from major surgery.

“We had a wonderful visit,” he said. “That dentist ministered to me. And Harriet and I had the chance to minister to her family. We talked together, took photos, and enjoyed our time together. I blessed her, and we put Emma’s name on the temple prayer roll.”

As music lovers, the Uchtdorfs were thrilled by the children, who play different musical instruments; two violin, one piano, one guitar, and one flute.

Two days later, the Uchtdorfs learned Emma had arisen from her hospital bed and asked for something to eat.

Elder Mark A. Bragg, a General Authority Seventy assigned to the South America South Area Presidency, said he witnessed the Lord’s hand at work on that recent Sabbath day through the actions of His apostolic servant.

“The family had been praying for a miracle, and all of a sudden they had an Apostle in their home ministering to them personally, one by one,” said Elder Bragg. “What made it more amazing is that we had received a list of potential ‘ministering visits,’ but this family was not on that last list. It was beautiful to see this intersection of prayers offered from a faithful family and prayers answered from a loving Heavenly Father.”

Even in their pain, that generous Uruguayan family “radiated such goodness,” added Elder Uchtdorf.

“How grateful I am that my dental inlay fell out. Otherwise, I would not have met that special family.”

New friendships were formed, and a traveling Church leader again witnessed the combined power “of the guidance of heaven and our desire to serve and do things for each other.” 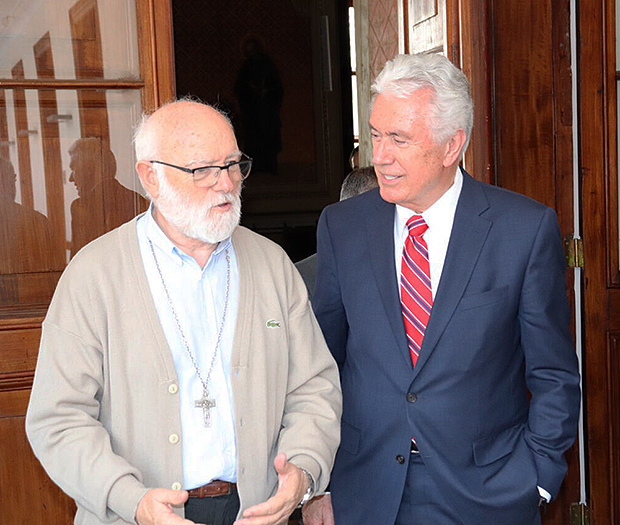 Elder Uchtdorf is grateful for everyday tools that allow him to travel globally.

“Just today, I used my cell phone to check and make sure everything was OK at my home,” he said.

But no device or app, he said, can replace direct fellowshipping with Latter-day Saints in their own homes and meetinghouses.

After arriving in Santiago, Elder Uchtdorf sat down with Chilean journalist Carolina Mendez. She asked him why he was traveling far from his home and about the role of a Latter-day Saint Apostle. He explained his divinely charged apostolic call to teach and minister to God’s children around the world and to testify of Joseph Smith.

“It is terribly important for me to be here and to see what life is like here. I personally need that contact so I can better relate with the people and see how the Church can better help.”

Elder Uchtdorf’s travels in Uruguay and Chile also demonstrate a gospel paradox that he loves: by acting to bless others, one is blessed by others’ actions.

On February 14, Elder Uchtdorf visited with Santiago Archbishop Celestino Aós Braco at the cleric’s office and neighboring cathedral. Barricades surrounded the place of worship—stark reminders of ongoing civil unrest and protests that have buckled the knees of this South American nation well-known for its stability.

When the archbishop learned of Elder Uchtdorf’s visit, “he invited me to come. So I met with him, and he was very open and friendly.”

Elder Uchtdorf promised his fellow religious leader that his Latter-day Saint neighbors in Chile were eager to help with the cleanup of recently vandalized Catholic properties and assist wherever needed.

Then the two men prayed together for peace in Chile.

In Santiago, he joined two sister missionaries for a teaching appointment in the home of a family of six learning about the restored Church.

“It was wonderful,” he said. “The house was humble, but behind it was a small but peaceful garden with beautiful trees.”

The family greeted their guests with smiles and a meal of local foods prepared for them. The missionaries taught about family home evenings, and their Apostle friend added his testimony to their teachings. “The family was so engaging, and I was able to learn more about the people in this area.” 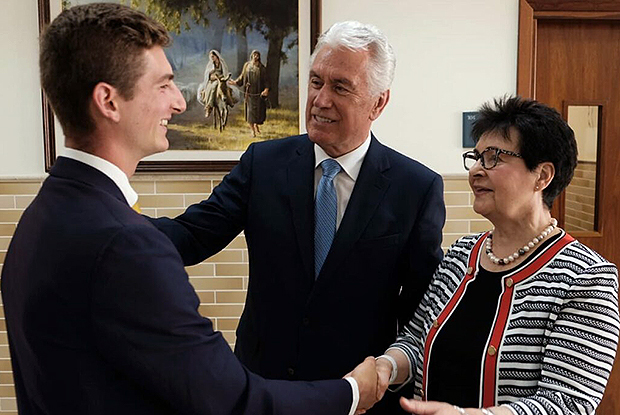 Elder Benjamín De Hoyos, a General Authority Seventy who presides over the South America South Area, marveled at Elder Uchtdorf’s ability to make new friends wherever he went during his recent travels.

“He took every opportunity to greet, and embrace, both members and nonmembers,” said Elder De Hoyos.

Elder Uchtdorf appreciates the rich history latter-day members of the Quorum of the Twelve Apostles share with this region of South America.

Elder Parley P. Pratt arrived in Chile in the mid-1850s to establish missionary work on the continent. But he soon found the gospel was not ready to take root. Further preparations were needed, including the translation of the Book of Mormon into Spanish.

Elder Pratt left Chile hopeful for the Church’s future. But his time in the country was also marked by sadness. Elder Pratt and his wife, Phebe, lost their infant son, Omner, while serving in the area. The baby was buried, ignominiously, high atop Valparaiso’s hilltop suburbs in a humble cemetery relegated to “dissidents” of the Catholic church. The cemetery, along with the baby Pratt’s grave site, remain. A plaque was placed at the child’s grave site on November 10, 2001, in memory of the Pratts’ labors and painful loss.

Decades passed before one of Elder Pratt’s apostolic successors, Elder Melvin J. Ballard, dedicated all of South America for the preaching of the gospel on Christmas Day 1925 in neighboring Argentina. A plaque near the Buenos Aires Argentina Temple grounds commemorates Elder Ballard’s dedicatory prayer and the beginnings of the Church in South America. Since that time, each country has been dedicated. The last one, Argentina, was dedicated by Elder Ballard’s grandson, then Elder M. Russell Ballard of the Quorum of the Twelve Apostles, on February 21, 2014.

But Elder Uchtdorf is quick to add that the Church’s most important chapters in Chile and Uruguay—and throughout South America—are claims of the future. They will not be written by visitors from Church headquarters in Salt Lake City. Instead, the Church’s potential here will be determined by its local priesthood and Relief Society leaders, along with the youth and the children.

The region’s growth, he warned, may be slowed if people adhere only to old habits. Many are asking: “Why church? Why religion? What does religion bring to my life and my family?” 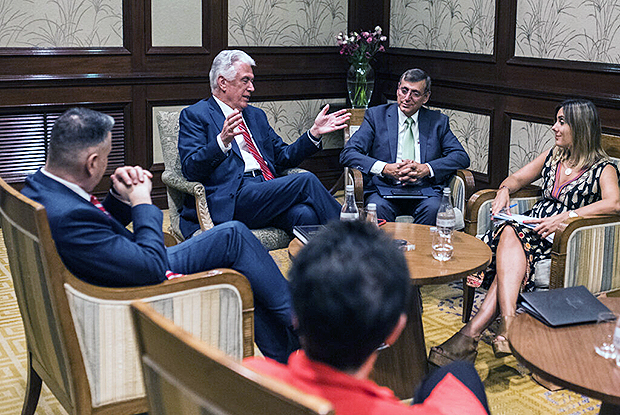 Elder Dieter F. Uchtdorf and other visitors on February 13, 2020, in Santiago, Chile.

“The gospel stays the same,” he said. “It is the gospel of Jesus Christ, as He taught it. There are people here who are searching for a better life and a better future. The people of South America are very resilient. They have gone through difficult times that go back to the days of the Spanish conquistadors and beyond.”

“We are living in a time where the tipping point could easily take you to one side or the other.”

The Church and its members, he promised, can offer stabilizing values in Chile through the principles of the restored gospel.

The Church News, coincidentally, met with Elder Uchtdorf on February 14—Valentine’s Day in much of the world, including Chile.

The Apostle is known for his generosity and inviting smile whenever he’s in the company of fellow Latter-day Saints, anywhere in the world. But he acknowledges a unique energy whenever Sister Uchtdorf is at his side. She remains a source of emotional, physical, and spiritual strength. She is his example. They experience their ministry as one.

“We take care of each other, and I so admire how she relates to people,” he said. “Without Harriet, I am only a part of myself.”