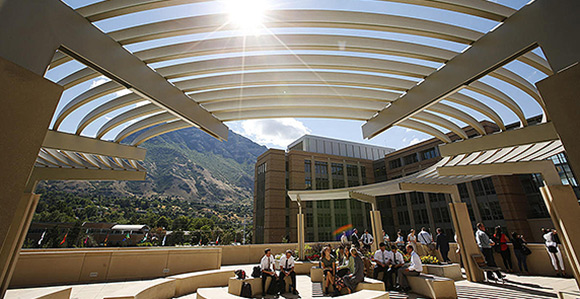 Missionaries study outside the Provo Missionary Training Center in Provo on Wednesday, July 26, 2017.

“This mighty and noble effort to bring the people of the world to Jesus Christ and His restored gospel began by small and simple means.” —Bonnie L. Oscarson, Young Women General Presidency

The completion and dedication of the Provo Utah Missionary Training Center expansion “marks a new era in the work that will accelerate,” said President Henry B. Eyring, First Counselor in the First Presidency.

“We speak sometimes of hastening His work as if we can change His time schedule by our effort,” said President Eyring, moments before offering a prayer of dedication on the new MTC facilities in Provo on Friday, October 13. “My guess is that we can neither delay nor accelerate His plan. But we can, if we listen to His Spirit, play our part to make His called messengers more joyful and more effective, helping them feel personally closer to Him as they serve in His cause.”

During his remarks before dedicating the new buildings, President Eyring said missionary training centers “play a major part in the Lord’s great cause of taking the gospel of Jesus Christ to the children of Heavenly Father in all the world.”

Missionaries, he said, will learn at the MTC to support each other and to listen to each other—as well as to the Holy Spirit. “They will continue to listen to and support companions as they teach investigators together in the field.”

During the dedicatory prayer, President Eyring asked the Lord to bless “those who labor, who serve, who study, and who live” at the missionary training center.

“We dedicate every part of these facilities and consecrate them for the sacred purpose of helping to prepare Thy servants to spread the gospel of Jesus Christ to the four corners of the earth so that honorable men and women will accept Thy word,” he prayed. 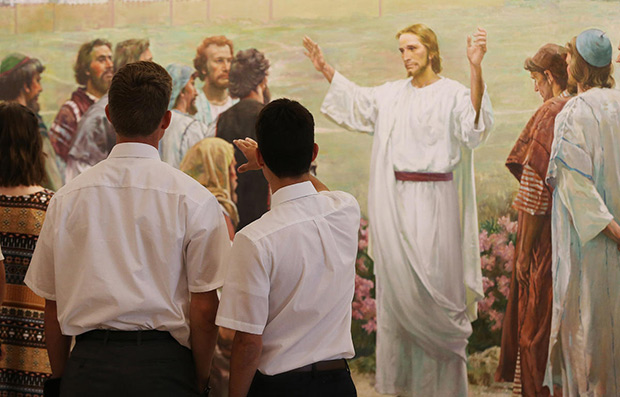 Missionaries look over the art at the Provo Missionary Training Center in Provo on Wednesday, July 26, 2017.

During his brief remarks, Elder Oaks reviewed some of the history of missionary training centers in the Church.

The Church’s experience with MTCs began in 1925, when a Missionary Home and Preparatory Training School was established in Salt Lake City near Temple Square, he said. The Church began pre-mission language training over 35 years later, in December 1961. At first, missionaries were oriented in Salt Lake City, then sent to Provo for language training, which was given in various facilities on the BYU campus. In 1963, the facility in Provo was named the Language Training Mission and included training in Spanish, Portuguese, and German. Four years later, Navajo and French were added, Elder Oaks explained.

In 1968, Church leaders decided to establish language training in other locations and to expand gradually to the teaching of 16 languages. In 1969, language training missions were established at the Church College of Hawaii for Japanese, Korean, and Chinese and at Ricks College for Dutch and the languages of Scandinavia.

In 1973, the First Presidency and Quorum of the Twelve Apostles decided to enlarge the Language Training Mission in Provo, and three years later the facilities in Hawaii and Rexburg were closed and all missionary language training was moved to the new Provo facility.

In 1977, the name of the Provo facility was changed to the Missionary Training Center. The following year the Salt Lake Mission Home was closed and all missionaries—regardless of where they would be serving—were brought to Provo for orientation and training.

“Now, 92 years after the first missionary training was given in Salt Lake City in English, we have 15 MTCs worldwide that provide training to approximately 40,000 missionaries each year,” Elder Oaks said. “We are grateful for the assistance of all who have helped with this wonderful new addition. Their work and dedication will bless the lives of tens of thousands of missionaries for many years to come.”

Sister Oscarson said from the time that Samuel H. Smith became the Church’s first modern-day missionary in 1830 to this day, “this work is fulfilling the prophecy found in Daniel 2. The divinely hewn stone cut out of the mountain is rolling down the mountain and will fill the whole earth.”

Samuel Smith accomplished missionary work without an MTC, a companion, lessons, or Preach My Gospel, she said. He only had “a testimony and a knapsack full of copies of the newly printed Book of Mormon,” she said. “He walked 25 miles his first day and ended up sleeping outdoors under an apple tree on the cold damp ground because the local innkeeper was offended by his message of the Restoration.”

Samuel Smith baptized no one and was able to share only a few copies of the Book of Mormon. “But,” said Sister Oscarson, “two of the copies he left with people would find their way into the hands of Brigham Young and Heber C. Kimball, who were eventually baptized and who brought many others into the Church.

“And so this mighty and noble effort to bring the people of the world to Jesus Christ and His restored gospel began by small and simple means.”

But, she said, the Lord had a greater vision in mind for spreading the gospel to the whole earth. “One could rightfully say that the earliest MTC was the School of the Prophets, which was organized in Kirtland, Ohio, in 1833.”

In 1925 the Salt Lake Mission Home was established under the direction of President Heber J. Grant and could accommodate 99 missionaries, who attended for one week and were set apart for their missions by a General Authority.

Sister Oscarson said one week earlier she had the privilege of speaking at a devotional in the MTC and saw the silhouettes of missionaries gathered in the classrooms. 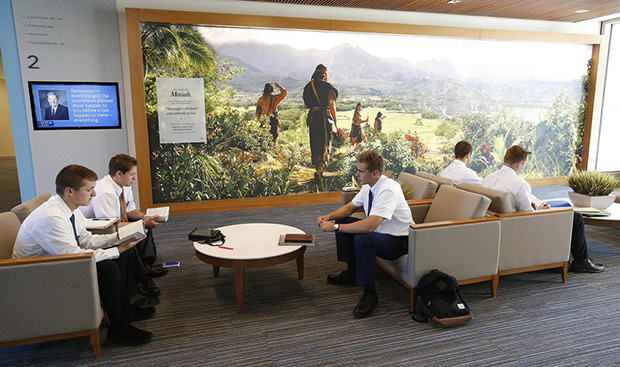 Missionaries study at the Provo Missionary Training Center in Provo on Wednesday, July 26, 2017.

“It is fitting and appropriate that these new buildings are filled with light,” she said. “They are representative of the light which fills the hearts and minds of all those who have burning testimonies of the restored gospel of Jesus Christ.”

MTC President David Martino said the architectural features of the new buildings allow light to penetrate through the edifices, “which is analogous unto the Light of Christ that permeates our souls.”

“We are here in these beautiful new buildings where you will see many magnificent architectural features, pensive messaging throughout the campus, and marvelous murals that adorn the walls,” he said. “Collectively, these add up to the experiential and inspirational learning that happens as a missionary resides here at the missionary training center.” 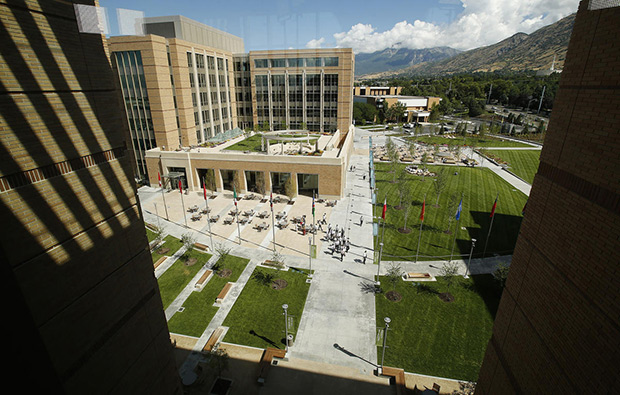 The Provo Missionary Training Center in Provo on Wednesday, July 26, 2017. New renovations have been made to accommodate 2,200 elders and sisters.

When standing in an upper room of the buildings, peering out of the windows that span from floor to ceiling, President Martino said missionaries can “observe God’s creations” as they view the mountains, they can overlook the temple that reminds them of their covenants, and they can look down on the campus and view other missionaries.

“All these are a reminder that the Lord is hastening His work to prepare the world for His Second Coming,” he said.

This is one of the most unique learning facilities in the world, he said. “The buildings are awe-inspiring, but the missionaries that reside here—having set aside their schooling, their work, their social life, and having dedicated 10 percent of their mortal existence to serving others—are what make it a spiritual sanctuary and an anomaly to the world.” 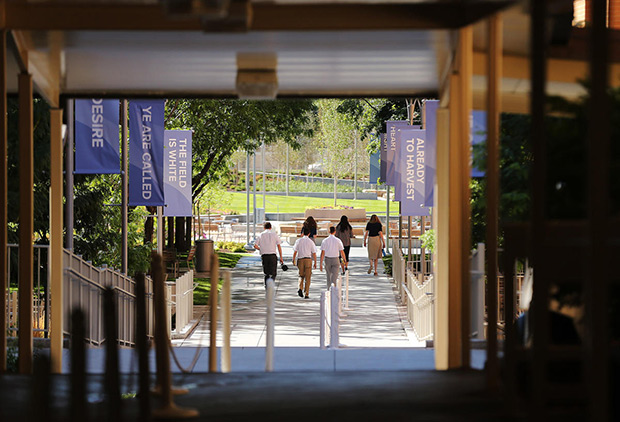 Missionaries walk the grounds of the Provo Missionary Training Center in Provo on Wednesday, July 26, 2017. 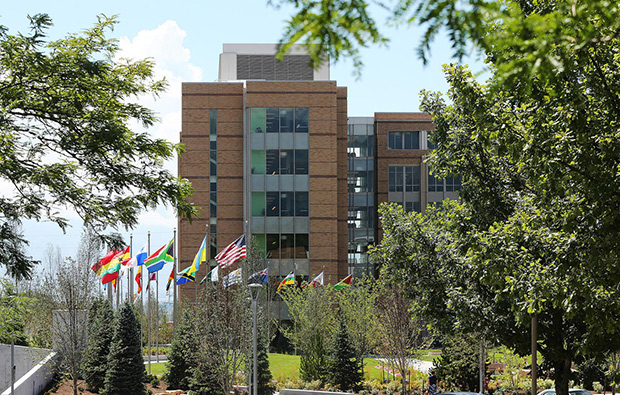 The Provo Missionary Training Center in Provo on Wednesday, July 26, 2017.