D-Day Recollections from Elder Hugh B. Brown on the 75th Anniversary 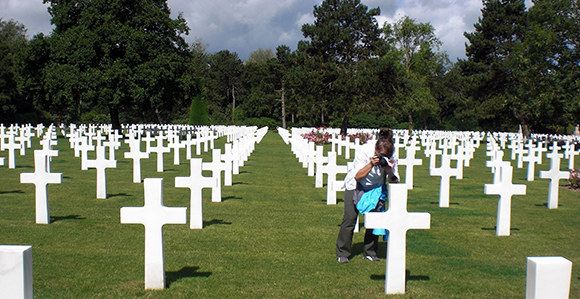 Rows of crosses at graves at the Normandy American Cemetery, a military cemetery, in Normandy, France.

Seventy-five years ago, on June 6, 1944, more than 150,000 Allied ground troops landed along a 50-mile stretch of coastline to fight Nazi Germany on the beaches of Normandy, France. The D-Day invasion, formally known as “Operation Overlord,” successfully breached the German defense and allowed Allied forces to liberate Europe.

During World War II, Hugh B. Brown—who would later serve as a General Authority, an Assistant to the Quorum of the Twelve Apostles, a member of the Quorum of the Twelve Apostles, and a member of the First Presidency—was appointed as the coordinator of Latter-day Saint servicemen while serving as president of the British Mission. He had served as a major in the Canadian army during the previous world war and traveled extensively in his assignment to servicemen, offering them counsel and encouragement.

In the July 8, 1944, Church News, Elder Brown wrote of his impressions from London, England, following D-Day:

“On the morning of June 6, just after the announcement was made that the invasion had indeed started, I went into the city, to Piccadilly Circus, Leicester Square, Trafalgar, down White Hall, past Downing Street and on to Parliament Buildings and Westminster,” Elder Brown wrote. “There was no shouting or noise, no strutting or boasting, no evidence of a sudden release of suppressed excitement, no crowds or knots of people on the streets, in fact nothing out of the usual every day business-as-usual attitude. But as I approached Westminster and later St. Martins in the Lane and St. Paul’s Cathedral I found that great crowds had assembled, crowds from all classes of society and upon going into these historic places of ancient worship I found thousands on their knees in silent supplication.”

Elder Brown goes on to commend the Latter-day Saint servicemen: “The attitude of our men in the forces testifies to the fundamental soundness of the homes from which they come and provides an inspiring report from the laboratories where they have been tested.

“They, in the main, are a credit to the Church and an inspiration to these other Christian people who are their allies.”

In watching the troops move down the coast to be transported by “their brothers of the navy” and protected by air forces, Elder Brown wrote, “One seems to sense a gentle minor chord of humility harmonizing with a major chord of faith and he himself is lifted up, and strengthened.”

Although the troops have been provided with the best equipment current science could produce, “our greatest assurance is based upon the fact that from general to private, from admiral to seaman, from king and president to the man in the street the allies undertake this task with a prayer on their lips, with trust in their hearts and with a firm conviction that they fight for freedom and not for conquest.

“‘D-Day’ in Britain as in America was a day of prayer and intercession. When victory comes let us remember on whom we relied and as nations try to be worthy of that victory. Let us pray that in the peace which follows there may be ‘charity for all and malice toward none.’”

The letter was signed, “Greetings and best wishes to all, Sincerely, Hugh B. Brown.”