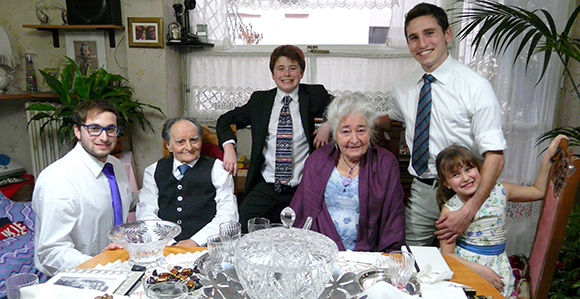 Agostino and Pierina Vardeu were baptized in Italy 40 years ago. They are pictured here with some of their grandchildren. The older boys in the picture are two of 10 grandchildren who have served full-time missions.

“Heavenly Father knocked on my door, and He didn’t give up on me.” —Pierina Vardeu of the Rome East Stake

Agostino and Pierina Vardeu were baptized members of the Church in June 1978. Married since 1961, they are among the most influential longtime members in Italy, and they’ve passed their love of the gospel down to four generations so far.

Holding hands as they sit side by side in their living room on a Sunday afternoon, surrounded by many of their children and grandchildren as well as shelves and walls filled with family photos, the Vardeus recalled their introduction to the gospel more than four decades ago.

“We didn’t find the Church,” Pierina said. “The Church found us.”

It was this same room in Ciampino where elders first taught Agostino after patiently waiting for him to come home from work, then waiting for him to eat supper before they were finally invited in. By then, the elders had only a few minutes left to share their message with Agostino and his son Sergio before they needed to head back to their own apartment before curfew.

But they made an appointment to return, and when they did, Agostino was waiting eagerly for them. He didn’t know his wife was listening carefully from the kitchen, telling herself there was no need for another baptism. Another son, 16-year-old Dario, had been praying to God to help him change his ways when the missionaries started teaching his father and brother. He soon joined in the lessons.

A month after the initial visit, Agostino had quit drinking and smoking, and he and his sons had a baptism date. Pierina secretly made arrangements to be interviewed for baptism and surprised the rest of the family when she appeared, dressed in white, to be baptized along with them.

Agostino squeezes her hand when he recalls seeing her there. “It was a special moment,” he said. He promised her they would be sealed in the temple.

Their 9-year-old daughter, Laura, was unsure, and her parents wanted her to make her own decision. Restored to health through a priesthood blessing when she suffered a tick bite that led to a high fever, she decided to be baptized in November of that year.

“Our family was so united from that moment on,” Dario said.

The Vardeu family was sealed in the temple in Bern, Switzerland, on Augsut 7, 1979. “It feels like yesterday, not 40 years,” Pierina said. “I was the happiest woman and mother because I got a special family, the [eternal] family I’d wished for. I’d prayed a lot for that.”

The couple was called to serve in the Swiss Temple, now known as the Bern Switzerland Temple, from 1998 to 2000. Agostino was one of the first sealers and was able to seal two of his grandchildren when they each married.

Opportunities to attend the temple only came a couple of times a year for members in Rome. The elder Vardeus remembered driving there in a blizzard that was the worst in 15 years. Pierina once sold a piece of furniture so they’d have sufficient money to make the 12-hour drive to Bern.

Dario and his wife, Alba, and Laura and her husband, Giulio Celestini, have also served in the Bern Switzerland Temple. All are looking forward to a shorter—and warmer—commute when the Rome Italy Temple opens next March.

The Rome Temple is being built on ground the Vardeu family and ward members used to picnic on. Pierina said they rejoiced when the temple was announced in October 2010, and they were in the choir for the groundbreaking on October 23, 2010. Having a temple in Rome “is like a dream,” Agostino said.

Although health challenges frequently prevent their attendance at the Rome Third Ward, Rome East Stake, Agostino and Pierina’s nearby family often gathers in their home after meetings. This particular occasion is the first time their grandchildren have heard the full story of their grandparents’ conversion.

“I kneel and thank the Lord,” Pierina said, “but I also work for Him to thank Him for all the blessings we have.”

As the oldest of their 10 grandchildren have left to serve full-time missions for the Church, the Vardeus have sent them out with a folder filled with their own faith-promoting stories as well as favorite talks by General Authorities.

A special treasure is a metal pencil case inscribed with the name of each missionary in the family, the mission, and the dates of service. The gift, created by the grandparents, is passed to the next missionary. Right now, grandson Paolo Celestini has possession of it as he serves in Greece.

The legacy of love and service is filtering down through four generations. In addition to sending out missionaries, all of the adult Vardeu children and grandchildren and their spouses serve in Church leadership in Rome and other areas of Italy.

“I grew up in the light of the gospel, thanks to my family,” wrote Dalila Vardeu Brando, a granddaughter and Young Women president in Milan. “Having grandparents who were active in the Church helped strengthen my testimony. I am grateful for their example of constancy and faith.”

Reflecting on how the gospel changed her life 40 years ago, Pierina said, “Heavenly Father knocked on my door, and He didn’t give up on me.” 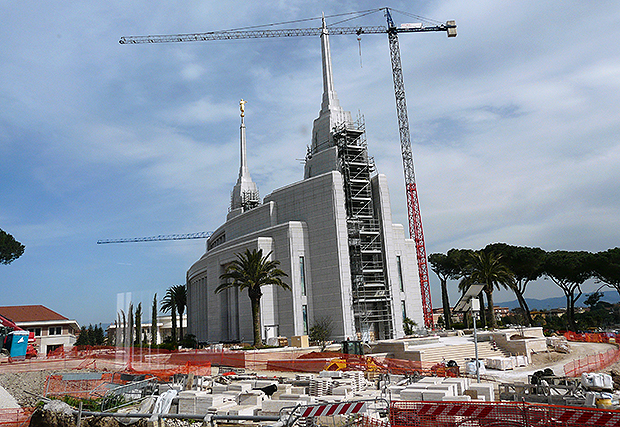