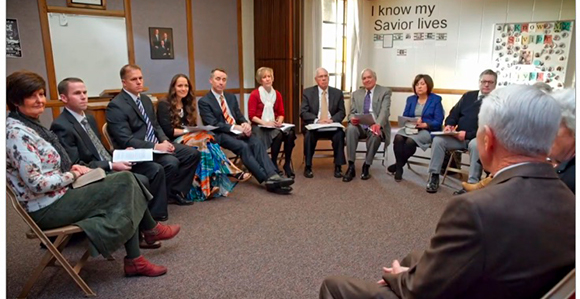 “The Church is governed by keys and councils. In councils you gather input and then work together to come to unanimous consensus. In councils both men and women participate in every level of the Church.” —Elder Robert C. Gay of the Seventy

As Latter-day Saints participate in Church and family councils, they are engaging in a heavenly pattern, said Elder Anthony D. Perkins, a General Authority Seventy.

“Our Heavenly Father operates through councils. We all participated in one,” said Elder Perkins, speaking of the Council in Heaven.

“There is an evolution in the Church, and more people are beginning to better understand what councils really are,” said Elder Golden.

“The Church is governed by keys and councils,” said Elder Gay. “In councils you gather input and then work together to come to unanimous consensus. In councils both men and women participate in every level of the Church.”

Sister Burton said as Church members participate in councils they put forth their best thinking and work together to determine the will of the Lord. “This is His work,” she said. “Councils serve to help determine His will in His work.”

Quoting Doctrine and Covenants 42:3, Sister Burton said in councils members assemble together as “an act of faith.”

Elder Nielson said one of the biggest frustrations people have is feeling like they are not heard. “A council allows everyone to be heard.”

A council allows everyone to be heard and opens hearts and minds for revelation to flow.

But in order to be successful, councils must focus on “the right questions,” Elder Golden said.

“We also need to go prepared to listen to the Spirit,” added Sister Jones.

Speaking of the worldwide training broadcast on teaching in the Savior's way, during which general leaders and others demonstrated the pattern of a council, Sister Burton said the strength of that group was “the differences we brought to the table.” 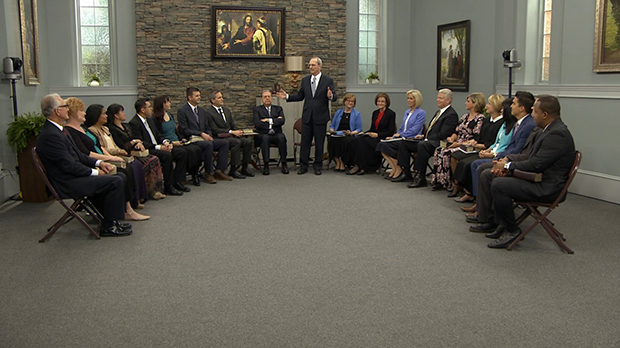 In monthly teacher council meetings, she continued, the new convert who can share what he is learning will bring a different perspective to the table than an experienced teacher.

“We all bring all our experiences. That is the value of a council,” she said.

Wards and branches now hold monthly teacher council meetings in which teachers can counsel together and study the manual Teaching in the Savior's Way.

Sister Burton said it has become easier for her to speak up as a member of the Priesthood and Family Executive Council because “I can see I have a role to play.”

Elder Perkins said councils are the genius of Church government. “The world operates with one man or one woman in charge of the organization. They decide what to do,” he said. Governance by councils “is learning how the Lord operates. He doesn’t operate by compulsion, He allows agency. … I think councils help us understand our Heavenly Parents better.”

The Lord has commanded Latter-day Saints to “assemble yourselves together to agree upon my word” (D&C 41:2), said Bishop Waddell.

It is interesting to bring individuals together on councils who have different responsibilities. Some of those responsibilities may be temporal; some may be ecclesiastical.

Every Area Presidency sits down with the Presiding Bishopric every six months “to discuss all the affairs that we have in common,” explained Bishop Waddell. “We counsel together to build the Lord’s kingdom and see what we can do to assist one another and to agree upon His word.”

In councils, leaders are able to blend the temporal with the spiritual and determine the Lord’s will. “It all has to do with building the Lord’s kingdom and blessing lives,” he said.

Elder Gay said the Church uses councils in how leaders administer self-reliance services and how they help members improve their lives. Self-reliance is discussed in the Council of the Presiding Bishopric in the Executive Welfare Council and with the Relief Society.

“At a member level you bring members together into small groups, which are like councils, where we ask them to mentor one another on how to make improvements,” he said. “They work together.”

Elder Klebingat said Church members often feel that their presence at ward and stake council meetings is enough to fulfill their calling. However, council members should come prepared, participate, and then take action after the meeting. “I was given the reminder that what happens before and after the council is actually as important as what happens in the council.”

And council participants should never forget the “So what?” question at the end, he said. “‘We just met for two hours. … What are we going to do?’ The understanding of what we do outside the council is really what the Lord is interested in.”

Sister Jones said councils can be a blessing to families. “Councils protect those very precious relationships,” she said. “I love the idea of councils assisting children in helping them to feel their worth and understand their divine identity. Hopefully because the Spirit has been invited to a family council, the children are being listened to, they are being asked questions, they are being included and feel a part of their family. I am grateful for the potential of family councils to bless children.”

Sister Jones recommended using a basket for gathering electronic devices. Digital devices can “interrupt a council,” she said. “It is a sacred time. It needs to be looked at as a sacred time, a revelatory opportunity.” 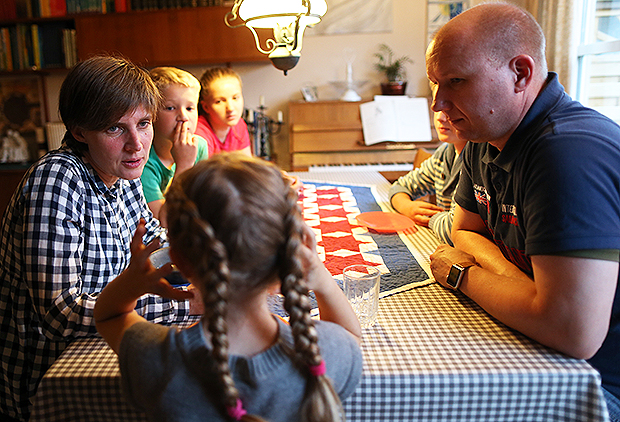 A family in Norway participates in a family council.

Elder Foster said when members think about the councils in the Church, from the Council of the First Presidency, clear down, they understand the Lord has designed councils and quorums to govern His Church. “It is not only to get the work done, but it is also to exalt His people as well,” he said. “When people experience what a real council is, when everyone is engaged, revelation flows.”

He said a good leader at a council won’t talk but will provide an opportunity for everyone else to speak in a safe environment.

“I have a statement that says, ‘When you tell someone what to do you are telling them to become like you, to act like you, to reason and think like you. When you let them counsel together, they can decide who and what they want to become.’”

Sister Jones said, “A sister recently approached me and asked, ‘Do the Brethren really listen to you?’ She said, ‘I need to know. Do they let you talk and do they really listen?’

“I said, ‘I have never been in a council setting where I was more listened to, more respected, or more encouraged than in the councils of the Church.’ She cried. I thought, ‘What experiences have led her to ask that question?’” 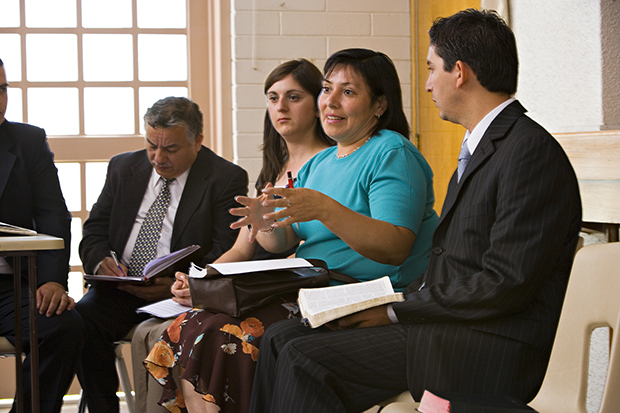 Church leaders say that all council members should come prepared, participate, and then take action after the meeting.

Elder Nielson said he has learned much about councils from serving on the Missionary Executive Council, chaired by Elder Dallin H. Oaks of the Quorum of the Twelve Apostles.

“I have been very fascinated to watch Elder Oaks, who won’t make a decision until he has heard from everyone in the council, even when it appears to me to be a very simple issue that could be decided now. If it is not right in Elder Oaks’s mind, if we haven’t vetted all the issues, he will delay it for weeks and sometimes months, until everyone is comfortable and the council feels like the heavens have opened, that revelation has been received, and this isn’t just our best judgment speaking.”

Members should not rush through councils, Elder Nielson said. “We are actually looking to heaven to get answers, and we wait until those answers come. We don’t act out of haste. We let the Lord help us know what the timeline is.”

He said Sister Bonnie L. Oscarson, Young Women General President, has been a great addition to the Missionary Executive Council—especially with the recent increase in the number of sister missionaries.

Elder Echo Hawk, who has responsibilities in Church Correlation, said one of his recent assignments involves the new Book of Mormon videos project. “The Bible Videos were enormously successful,” he said. “Now, the keystone of our religion, the Book of Mormon, is ready to go forward and has been approved to produce similar videos. That means a lot of departments in the Church have to be involved.”

Much of the work with this project was accomplished through the council system, he explained.

Elder Golden said it is very healthy, when participating in a council, to say, “There are many ways in which the Lord can accomplish His work. Often, it is going to look a little different for everyone.”

“It is great to share these potent ideas with members of the council as to what works for us individually, but we should take care to share these ideas in a manner that lets others know that the Spirit of the Lord allows for a variety of ways to counsel and to do His work.

“One size doesn’t fit all.”