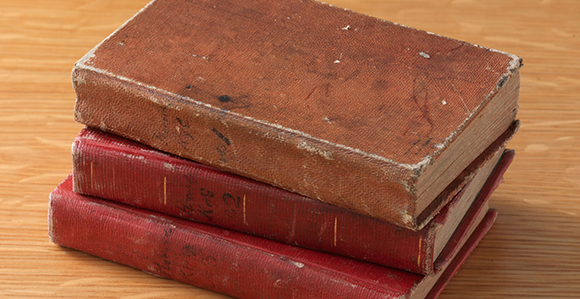 The minutes of the Nauvoo-era Council of Fifty, a document long shadowed in mystery, will be revealed to the public with the publication on September 26 of the latest release in the Joseph Smith Papers Project.

On the occasion of the new volume’s release by the Church Historian’s Press, the original minute books containing the document in the handwriting of the council’s clerk, William Clayton, are on public display at the Church History Library in Salt Lake City through October 7.

As explained in information text displayed in the exhibit, the Council of Fifty was organized by the Prophet Joseph Smith on March 11, 1844, “to establish a government or a new home outside of the United States where the rights [of Church members] would be protected. It was referred to as the Council of Fifty because it had approximately 50 members.”

The content of the minutes for many years has been the subject of intense speculation by persons interested in Church history because the document has not been available for public inspection. The minutes became part of the collection of records of the First Presidency, where they remained throughout the 20th and early 21st centuries, until they were transferred to the Church History Department in 2010.

In 2013, the First Presidency authorized publication of the minutes as part of the Joseph Smith Papers. Since then a team of historians comprising Matthew J. Grow, Ron Esplin, Mark Ashurst-McGee, Gerrit Dirkmaat, and Jeff Mahas has been preparing the minutes for publication.

The Council of Fifty met in Nauvoo between March 1844 and January 1846, and the minutes on display at the library and published in the new Joseph Smith Papers volume are from this period. The council then reconvened in Salt Lake City in December 1848 under the leadership of President Brigham Young following the exodus of the Church from Nauvoo. It met on and off during the following decades, with the last meeting taking place in 1884.

In Nauvoo, most council meetings were held in Joseph Smith’s store or in the Seventies Hall but sometimes took place in the Nauvoo Mansion, the Masonic Hall, and the attic of the Nauvoo Temple.

Clerk William Clayton kept the minutes on loose paper. In June 1844, believing his own life was in peril, Joseph Smith instructed Brother Clayton “to burn the records of the kingdom, or put them in some safe hands and send them away or else bury them.”

Brother Clayton opted to bury them in his garden. Just before the Prophet’s death, he unearthed them. He copied the minutes into the three small record books that are now on display at the library. Presumably, most of the loose papers on which the minutes were originally kept have been destroyed, although the ones from two of the meetings still exist.

After the martyrdom of Joseph Smith, the volumes were brought across the plains by Brigham Young to the Salt Lake Valley and retained by him or other members of the council. President Young allowed Wilford Woodruff to use the minutes in working on a multi-volume manuscript history of the Church that Joseph Smith had begun.

By the 1880s, the minute books ended up in the custody of the First Presidency, where they remained until 2010.

The Council of Fifty was intended to establish the political kingdom of God on earth and to protect the Latter-day Saints in their religious rights and worship. Its most important priority was to find a new location where the Latter-day Saints could settle. Possible locations under consideration were Texas, California, Wisconsin, Oregon, and the eventual destination, the Rocky Mountains.

Another priority of the council was to assist with the campaign of Joseph Smith for election as U.S. president, after none of the men running for that office pledged to protect the Latter-day Saints in their religious liberties.

Yet another objective was to unite the Native American tribes and teach them the gospel.

After the martyrdom of Joseph Smith, completion of the Nauvoo Temple and the Nauvoo House became a priority, and when the Illinois State government, responding to anti-Mormon sentiment, revoked the Nauvoo Charter, the council was instrumental in governing the city and protecting the Saints.

Three men who were not members of the Church were included “to make the point that in political matters, a man’s religion should not come into play,” said Brother Grow, one of the editors of the new Joseph Smith Papers volume, which is entitled Administrative Records, Council of Fifty Minutes, March 1844–January 1846.

“He made very strong statements in the council about the importance of agency and how that related to religious liberty,” Brother Grow explained. Members were to speak freely and then come to unanimous decisions. “He told them he didn’t want to be surrounded by a set of ‘dough heads.’ By this he meant he didn’t want to be surrounded by people who wouldn’t share their real feelings.”

The Council of Fifty, a temporal or political body, was distinguished from the First Presidency, the Quorum of the Twelve Apostles, and other quorums and councils, the purpose of which was to administer the ecclesiastical affairs of the Church. 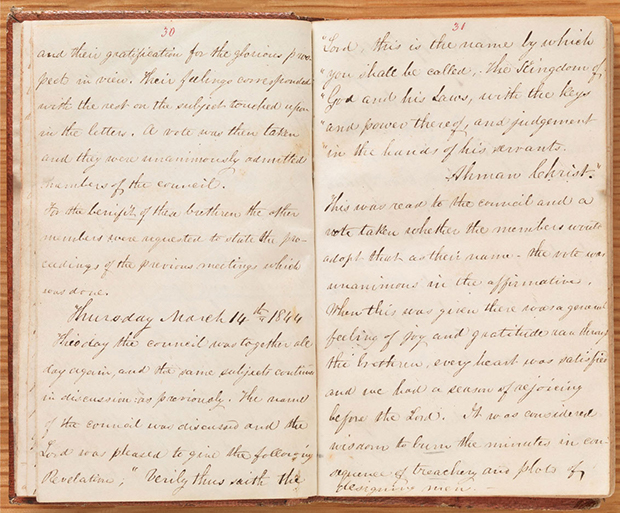 An excerpt from the minutes of the Council of Fifty, recorded by William Clayton from March 1844 until January 1846. Photo by Trent Toone. 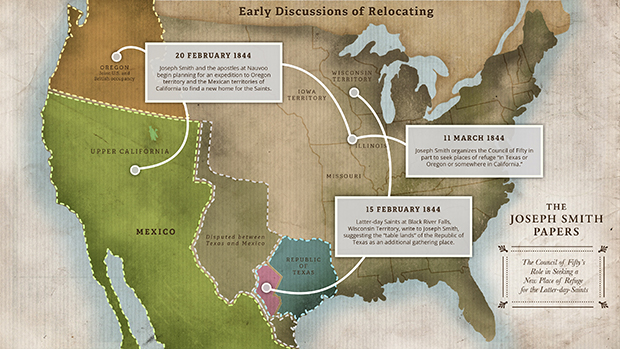 “The Council of Fifty was involved in matters such as exploring sites in the American West where the Saints could settle,” said Matthew J. Grow, one of the editors of the Joseph Smith Papers volume titled Administrative Records, Council of Fifty, Minutes, March 1844–January 1846. Possible locations for the migration included Texas, California, Wisconsin, Oregon, and the Rocky Mountains. Photo courtesy of the Joseph Smith Papers Project. 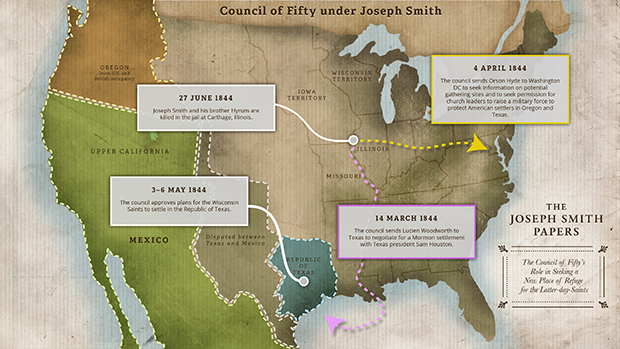 The Council of Fifty was involved in exploring sites in the American West where the Saints could settle. Possible locations for the migration included Texas, California, Wisconsin, Oregon, and the Rocky Mountains. Photo courtesy of the Joseph Smith Papers Project. 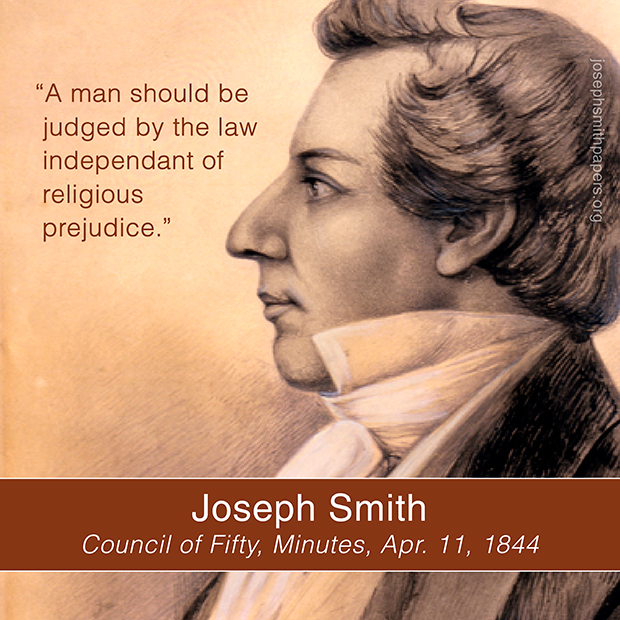 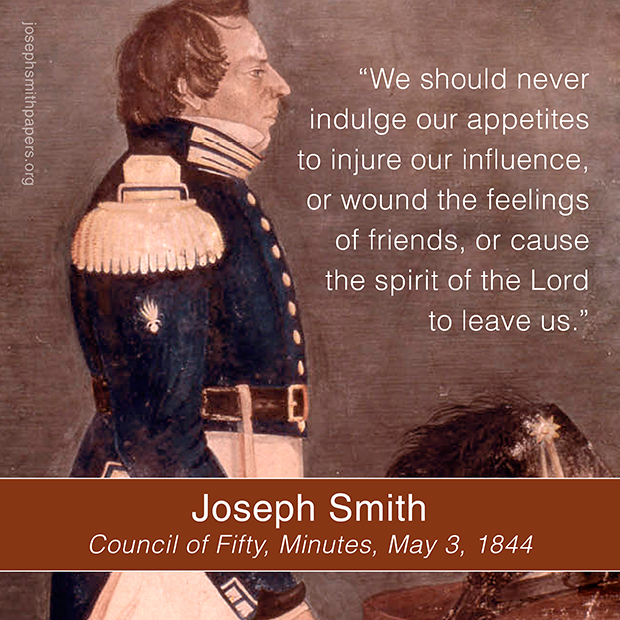