The ongoing global coronavirus crisis has closed temples of the Church of Jesus Christ on three entire continents, with only two temples each in Africa, South America, and the South Pacific joining the 46 temples still open in North America.

And the number of temples closed worldwide has now surpassed triple digits—111.

Meanwhile, the Church announced Monday, March 23, that Oquirrh Mountain Utah Temple will extend a temporary closure because of a possible exposure to COVID-19. The temple had been closed since March 9 for maintenance and was to reopen this week.

“Due to a potential COVID-19 exposure, the Oquirrh Mountain Temple, which has been closed for maintenance, will remain closed for an additional week for evaluation,” said Church spokeswoman Irene Caso.

With the addition of several more temples in the United States to the growing list of temples having suspended all operations and ordinances in the wake of the worldwide health crisis, more than 110 of the Church’s temples now are temporarily closed, with numerous Church areas without an temple able to offer living ordinances.

In all, 111 of the Church’s 168 operating temples worldwide have been temporarily suspended, with another seven closed while undergoing scheduled renovations. That leaves temples—mostly in North America—operating on limited hours to provide living sealing, initiatory, and endowment ordinances.

The closures mean there are no temples currently open through Europe, Asia, and Australia as well as much Central America and nearly all of South America and Africa.

In North America, the United States has 32 of its 81 temples open with adjusted schedules, while Mexico has 11 of its 13 open and Canada three of its eight.

Such is the result of COVID-19 and temple worship as the global community take major health precautions to combat the coronavirus in early 2020. Below is the most recent listing of temple closings and renovations, along with temples still operating under directed adjustments.

On Friday, March 13, the First Presidency and Quorum of the Twelve Apostles first announced temporary adjustments to temple work in a letter to all Church members.

The scheduling and availability of living ordinances was to take affect March 16, with the following additional instructions:

Where government or other restrictions on public and/or religious gatherings would preclude temple activity, proxy, and living ordinances will temporarily be suspended.

Where government or other restrictions do not preclude all temple activity, the following temple ordinances for living persons would be accommodated as capacity permits by appointment only: husband-and-wife and child-to-parents sealing ordinances, and living initiatory and endowment ordinances. On a temporary basis, proxy temple ordinances would not be performed.

All patron housing was to be closed.

As a follow-up to the March 13 letter regarding temple worship, the Church released frequently asked questions on March 16 further explaining temporary temple adjustments.

Temples will only accept appointments for living ordinances from members residing within the local temple district.

In states, provinces, or regions that have multiple temples, those temples can accept appointments for living ordinances from members within the state, province, or region.

This applies retroactively to previously scheduled appointments. Temple staff will contact all those affected to answer questions and cancel or reschedule appointments.

Temple staff will also attempt to contact those scheduled for living ordinances the day before their appointment to ensure no members of the patron’s attending party are showing symptoms of COVID-19.

Members showing symptoms of COVID-19 should not attend the temple.

These policies became effective immediately and will continue until further notice, according to a statement released by Church leaders on March 18. “The Church will continue to monitor conditions around the world and make further adjustments as necessary.”

Latter-day Saints are to consult the individual temple home pages as listed on ChurchofJesusChrist.org to see if their local temples are still open and available to schedule living ordinances.

Some temples are temporarily closed or are coming of closure for scheduled maintenance, such as the Anchorage Alaska, Gilbert Arizona, Gila Valley Arizona, and Tuxtla Gutiérrez Mexico temples. Since they are closed for maintenance and scheduled to reopen with limited operations, they are included below under the “still operating” list. 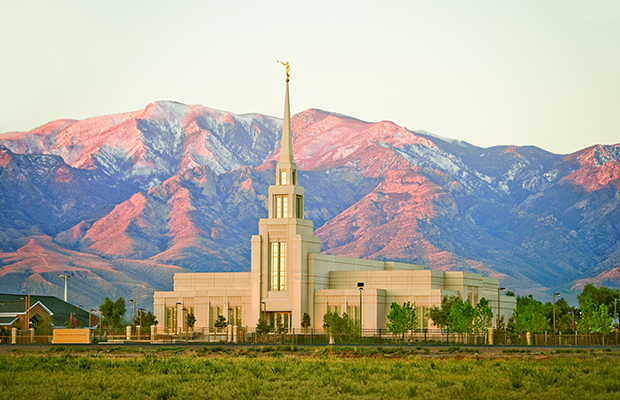 Outside the United States