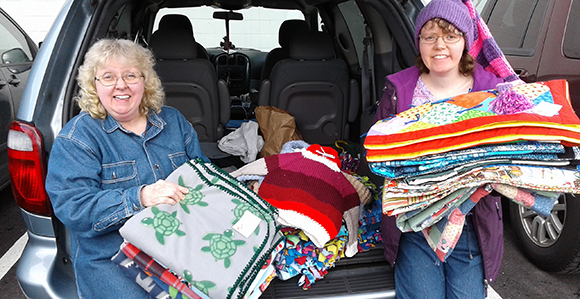 “We have a great deal to share, and . . . whenever you listen to the Spirit or an idea comes to you, you need to follow it and talk to the Lord about it. And if He approves it, He’s behind you, so start moving forward.” —Sharann Gilliam, Lakewood Washington Stake

For years, Debbie Carter of the South Hill Washington Stake had the desire to volunteer to be a court-appointed special advocate for children but said the timing never seemed right for her to volunteer. Then, after two young boys in her community lost their lives at the hands of their father, she decided she could no longer hold back.

Becoming a CASA has blessed her life greatly, she said, noting how much the children she works with have inspired her.

“From them, I have gained a deeper understanding of the meaning of compassion,” she said. “Because of them, I have hope the world will be OK. I have felt the presence of the Savior in this work; I know He loves not only the children but also their parents.”

Through her work, Carter said, she has come to realize that blessing the lives of others does not take many hours each month and that small contributions can make a big difference.

In a recent interview with the Church News, Janice Martin, a public affairs representative for the Church in the Pierce County area in Washington state, said she is constantly surprised by the amount of service and good works that the women in her community, like Carter, go about doing without receiving much recognition.

Sharing the stories of a handful of women she has come across through her Church calling, Martin said, “Each one of these women has done totally different things in their community and made an impact.”

Their examples of quiet service are unique and powerful and show how much of an impact each individual can have, she said.

After spending most of her adult life working full-time, taking care of her family, and serving in various Church callings, Melinda Huish of the Tacoma Washington South Stake felt like she had no time for herself, let alone time to do additional community service.

“But I got to a point where I just ran out of excuses,” she said. “I felt it was really time for me to give back to my community more than just focus on my family.”

Reaching out to some local organizations to see if she could partner with them, Huish came across an organization called Associated Ministries—an interfaith nonprofit dedicated to bringing together people of all faiths. And, after meeting with their community outreach coordinator and speaking with her stake president, Huish began planning her first interfaith conference.

“That began a whole series of little miracles,” Huish said, recalling all the things that led up to hosting two successful interfaith conferences in the Pierce County area in Washington.

“We had four women come together, two from the nonprofit and two as volunteers. I was the cochair of the event, and my cochair, Karen, is a Zen Buddhist, . . . and we became lifelong friends. She is like the yin to my yang.”

Despite coming from two very different religions and perspectives, Huish and her cochair settled on three key themes while planning the first conference that were important to all the women involved. “The themes were to energize our faith, strengthen our families, and serve together in the community,” Huish said.

With those themes as their guiding principles, the small group of women, with the support of Associated Ministries and other local supporters, have now hosted two large women’s interfaith conferences—the first in 2017 and the second in 2019.

“What I’ve found through this is there are so many wonderful, wonderful women out there who want the same things as we do,” Huish said. “They want a strong community, they want to strengthen their families and protect them, and they want to have the kind of faith that is strong through every kind of tragedy, and there are many tragedies that all of us will face. So these three goals are very common to all of us as women, and what I’ve found is that there’s so many ways we can share small things like that with other women.”

Through her work with local nonprofits and interfaith conferences, Huish said she has seen an increase in love and understanding between women of different faiths in her community and that she has also come to a better understanding of what charity really means.

“When you understand someone, you can like them, and when you like them, you can love them, and you can serve them and serve with them,” she said, noting that charity is the pure love of Christ. “So we become more true neighbors when we understand a little better. . . . We have so much more in common than we do different.” 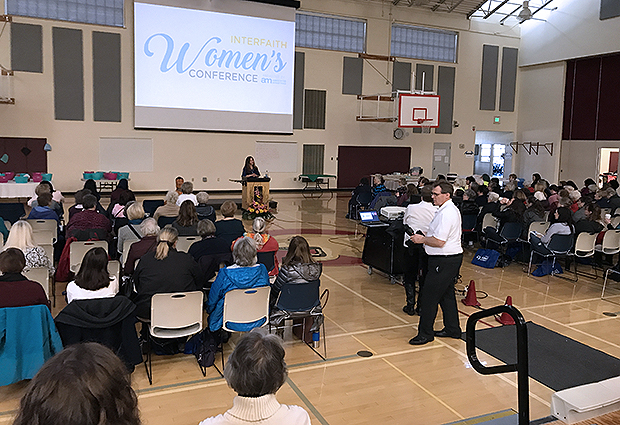 The opening ceremonies of the 2019 Associated Ministries Interfaith Women’s Conference is attended by 300 women of all faiths coming together to learn and find ways to serve their communities. Photo courtesy of Melinda Huish.

As an army wife, Sharann Gilliam of the Lakewood Washington Stake said she knows from experience that sometimes when one sees a need, they have to fill that need themselves.

Some years ago, while stationed on a military base in Hawaii, a general’s wife called Gilliam following the First Ft. Campbell Family Symposium, which Gilliam had co-directed. The general’s wife shared Gilliam’s interest in planning a women’s conference.

“It has had a tremendous effect, and it’s still going on, which shows how much of a need it has met,” she said, noting that the first conference she did was back in 1987.

Later, when her husband was restationed in Washington, she started a second conference there, in 1995. 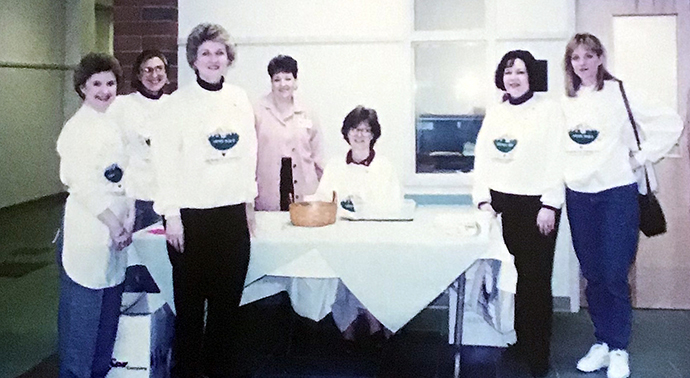 Army and military wives gather for a special women’s conference on base in Washington, organized by Sharann Gilliam, in 1995. Photo courtesy of Sharann Gilliam.

“It has been a tremendous thing to see grow,” she said, noting that after a couple of years in each location, she turned the conferences over to other army wives to run. “The women are so uplifted. It’s still going on, and it’s been a great blessing to the women with military husbands.”

“The Lord has led me to these opportunities. In my personal life, the Lord calls me to things in or out of the Church. He has blessed me with great organizational abilities, and I just depend on Him,” she said. “We have a great deal to share, and I just have the feeling that whenever you listen to the Spirit or an idea comes to you, you need to follow it and talk to the Lord about it. And if He approves it, He’s behind you, so start moving forward.”

Women in the Church have no idea how much they know, Gilliam said. But if they find something to believe in and make it happen, it can bless the lives of many.

There is a power that comes in showing up, raising your hand, and being willing to speak, said Linda Bird of the Tacoma Washington North Stake.

It's not a surprise that, as a big proponent of community planning, Bird helped plan and guide her community’s effort in successfully incorporating a city for the first time in 50 years in their county. But what may be surprising is where her inspiration to get involved in the first place originated.

In the 1980s, when the Church first announced the creation of a three-hour Sunday schedule, Church leaders encouraged members to use their extra time to get more involved in their communities. Bird took that counsel to heart and immediately started seeking ways to involve herself in local government and community planning.

Through her work, Bird said, she has had a hand in creating several new parks throughout the county as well as ensuring that sidewalks are accessible on nearly every street. Finding ways to contribute to one’s community is pretty simple, she said.

“You look around the community, you see where there’s a need, and you go for it,” she said. “Service is so ingrained in the doctrine of the Church that it’s become second nature in a lot of ways; because we are a lay ministry, we’re always serving one another. It’s an integral part of the gospel of Jesus Christ to love your neighbor, and it’s not just your neighbor in the Church; it’s your neighbor—whoever that may be.”

And while Bird has been able to contribute to her community in very tangible ways, she said that she feels she has been equally built up by interactions with her neighbors.

“They’ve taught me a great deal. It is not a one-way thing,” she said.

For Elizabeth Thomas of the South Hill Washington Stake, offering service has become a way of life for her family. Hardly a day can pass by when she isn’t working on sewing something that will be used to serve someone in her community in some way.

For many years, Thomas, along with her daughter and often as many as 20 women from their community, the majority of whom are not members of the Church, have met each month at their local library to gather, chat, and sew various items for local charity organizations. 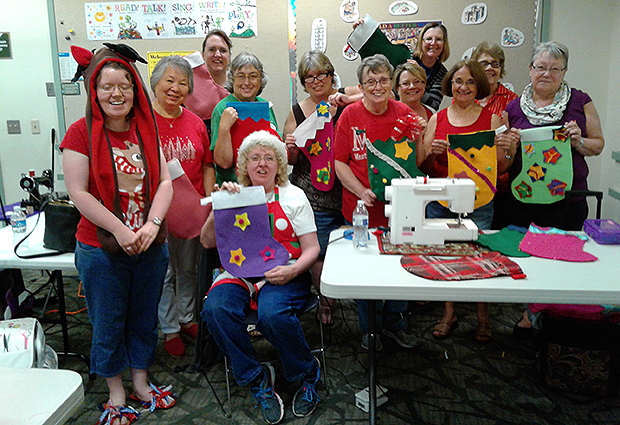 Sometimes they sew baby clothes to give to young mothers through a low-income maternity clinic. Other times they sew pillowcases and blankets to give to foster kids through the nonprofit group The Wishing Well Foundation. And oftentimes they work to sew quilts to send to people who have been through tragedies, like the families from the Paradise, California, fires last year.

“We meet some wonderful people in the community with what we sew, and we bring a lot of joy to people,” Thomas said. “We sew good things, and people are always so thankful. I just see the Lord’s hand in everything we do.”

It has been a humbling experience to see how something so simple can affect so many people, Thomas said, and it’s not just those that receive their service who benefit from it.

“Most of these women that come to sew with us I didn’t know before,” she said. “But we’ve rallied around one another and been friends through difficult times, so we’ve developed a community. We’ve created a community of goodwill.” 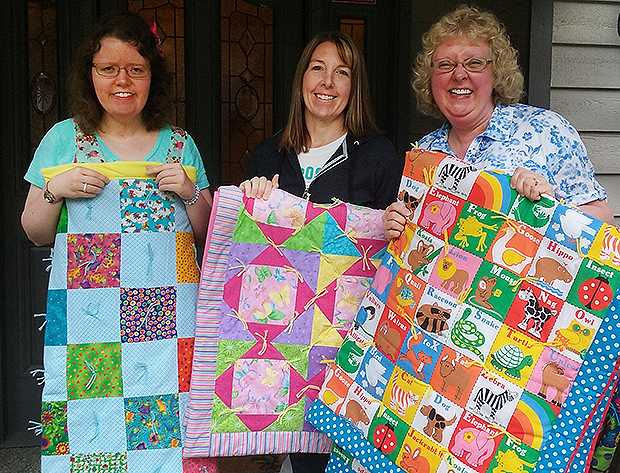