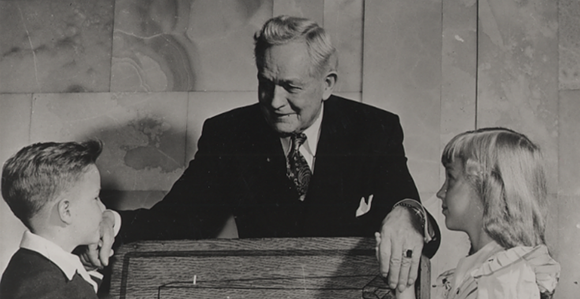 In 1966, President David O. McKay encouraged the Saints to “walk in the light as He is in the light, thereby avoiding the unhappiness, sinfulness, and misery of a misguided world.” His message is applicable today.

“Preach that honesty in government is essential to the perpetuation and stability of our government as it is necessary to the stability of character in the individual.” —President David O. McKay

A half-century ago, on September 30, 1966, President David O. McKay offered the opening message at the Church’s 136th Semiannual General Conference at the Salt Lake Tabernacle. Surely everyone gathered inside the Tabernacle—or viewing or listening to the conference from afar—sat up in his or her seat a bit taller as the leonine prophet began to speak.

For any Latter-day Saint under 60, the 93-year-old President McKay had been a source of comfort and counsel their entire life. Called to the Quorum of the Twelve Apostles in 1906 at the age of 32, he radiated influence that would survive his apostolic tenure. His key teachings—including “Every member a missionary” and “No other success can compensate for failure in the home”—remain familiar and relevant today, decades after they were first uttered.

Yet on this opening day of general conference in 1966, President McKay was a man deep into the winter of his life. His once strapping frame (he had been a college football lineman) had turned frail. His voice was weak. But his prophetic message that day was timely and timeless.

President McKay showed the effects of his age, but his trademark enthusiasm would not be dimmed.

“I love life,” he said. “I think it is a joy to live in this age. Every morning, as I view from my window the mountains to the east and greet the sun as it ushers in these unexcelled autumn days, I feel the joy and privilege of life and appreciate God’s goodness.”

He spoke of the strength he received from the example of Latter-day Saints worldwide.

“It is a source of real encouragement to contemplate the loyalty and energetic efforts of the members of the Church who are contributing of their time and their means to building up the kingdom of God on earth.”

The Church’s ninth President also stood on the prophet’s “watchtower,” offering guidance at a moment defined by war and social turbulence.

“It is because of these threatening dangers that the world should become anchored in the eternal truths of Jesus Christ and realize that there are eternal verities in this changing world,” he said.

His counsel on the eternal nature of honesty rings true 50 years later in a time of shifting and situational ethics and beliefs. “Preach that honesty in government is essential to the perpetuation and stability of our government as it is necessary to the stability of character in the individual.”

He concluded his remarks with a loving blessing: “God help us all to walk in the light as He is in the light, thereby avoiding the unhappiness, sinfulness, and misery of a misguided world.”