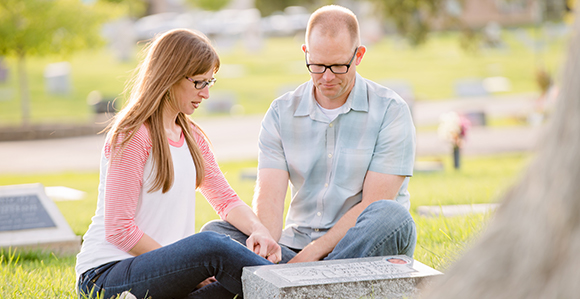 Speaking to parents who have lost a child, Elder LeGrand Richards of the Quorum of the Twelve Apostles bore his testimony of eternal families, sharing the stories of the two children he lost.

In the October 1971 general conference, Elder LeGrand Richards of the Quorum of the Twelve Apostles shared a personal story about his firm belief in eternal families: “There are those of us who have laid away our little ones in the grave, and we had that responsibility.

“A little daughter was born to us over in Holland while I was president of the mission there, and we kept her until she was three and a half years old. My wife has said time and time again that she knew the angels brought that spirit to her because she felt their presence, and yet we laid her away in the grave. If we had to feel that that was the end, we would have given anything in this world to have her back again.

“And then we come to this great knowledge that we have in the restoration of the gospel, that she will be ours in the eternal world and we will have the joy of seeing her grow up without sin, unto salvation. Sometimes I have thought that probably some of these choice spirits did not need the experience here in mortality like other children, and that is why the Lord has seen fit to call them home.

“We had four daughters before we had a son. We were sent to California to preside over a stake down there, and our boy went out with a member of the high council and his boys, and he lost his life in an accident. That is the greatest sorrow that ever came to us, but now we are getting up on the top of the ladder, so to speak, and we look forward, knowing that these love ties are intended by God, our Eternal Father, to endure throughout the eternities.

“It takes the sting away from death to know that we are going to meet those who are so dear and sacred to us. Thank God for this knowledge! I want to see our foundation here so laid that we will be worthy to stand with our loved ones and with the sanctified and the redeemed of our Father’s children.

“Brothers and sisters, we are a blessed people. We are blessed in the privilege of living upon the earth when the gospel has been restored and having a knowledge of its truth. We are blessed to have a foundation upon which to build our faith, which makes every day a happy day as we associate with our loved ones.

“No wonder President McKay so often said that no success in life can compensate for failure in the home. And the nearer men and women live unto God in keeping His commandments, the greater is the love in the home and the greater appreciation of the knowledge that that love can continue throughout the eternities that are to come.”