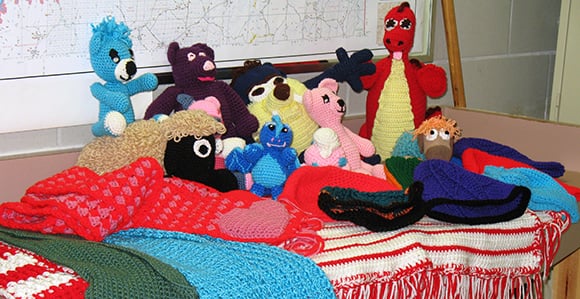 Crocheted items made by inmates at the San Juan County Jail sit on display, including stuffed toys, blankets, afghans, hats, and scarves. The inmates donated their award-winning crocheted items to the Transitional Services Office at Welfare Square in Salt Lake City, Utah, this winter, helping formerly incarcerated individuals, their families, and others stay warm.

“It’s amazing to think that you’re feeling the Spirit so strongly in the midst of a prison. It’s humbling.” —Steven Collings, FamilySearch engineer

What do Tigger, the Yankees, and FamilySearch all have in common?

The question might sound like the beginning of a lame joke, but the answer is far from a punch line: They’re all subjects of intricately crocheted items created and donated to the poor and needy by an unlikely service group—inmates at the San Juan County Jail in Utah.

Greg Young, the general manager of Transitional Services, said having the additional crocheted hats, blankets, and warm clothing on hand has helped over 150 individuals and families who have come through the office during the cold winter months. The thought of inmates serving recently released inmates made the items especially unique, he said.

“[Inmates are] helping out other formerly incarcerated individuals,” Young said. “This group is actually, in turn, helping other people that are coming out of the system, as well as the homeless, and even some knitted items … for these little kids that come into our office. It just reaches your heart when you see that.”

Using crochet to “Pay It Forward, Save It Forward”

Sitting on Main Street in the rural, southeastern Utah town of Monticello, the San Juan County Jail is a medium-sized detention center that can service more than 100 prisoners from the state and county systems. Inmates stay there anywhere from a day to 2 years, and the jail has a robust education program offering high school, music, art, and—yes—even crochet classes.

“We’re just trying to make it [so that] by the time they leave, regardless [of] how long they’ve been here—a day, a week, a month, a year, whatever—they’re better off than when they came,” said Mark B. Bradford, the Education Center director for San Juan County Jail. “Our mission statement is to have a healthy educational environment where it’s safe to learn.”

The crochet program has long been an important part of inmates’ education, Bradford said. He estimates San Juan County inmates have been creating and donating various crocheted items for at least 18 years. They’ve crocheted hats, scarves, throws, stuffed animals, blankets, and more, and they have donated their end products—usually enough to fill up 12 to 15 apple crates—everywhere, from orphans in Africa to troops in Afghanistan.

And they’re not just making simple designs, Bradford said. He’s known inmates to create their own patterns and even develop their own unique stitches to complete certain projects.

In fact, inmates become so expert at crochet, it’s typical for them to enter their best creations into the San Juan County Fair and earn awards. Last year alone they took home almost 20 blue ribbons and even nabbed one “Best of Show” ribbon for a New York Yankees blanket donning the franchise moniker and Yankee logo across it.

The program, which relies completely on outside yarn donations, is part of the Education Center’s “Pay It Forward, Save It Forward” program, which focuses on service. In fact, inmates can even get hired as TAs, or teaching assistants, who help teach other inmates the art of crochet to that end. There are even different class levels, from a 101 class for beginners to an advanced class that gives inmates the freedom to make whatever they choose.

Bradford said this selfless work—whether as a TA or making crocheted items to donate—helps inmates develop self-esteem, pride in their work, and satisfaction in themselves. The same end goal of the program is behind everything they create: Help others with no expectation of reward.

“We’re not doing it because we want to get patted on the back. We’re just doing it as an act of kindness and rendering service,” Bradford said. “[Inmates] have to be willing to have dedication and ‘stickity tooty’ and give not wanting something in return, not knowing where it’s going to go, or when somebody is going to get the benefit of it.”

Although they do get thank-you notes on occasion, Bradford said the inmates don’t expect it. They just do their best regardless.

That’s what, in part, makes the program so remarkable to Young, who was blown away by the talent level and heartfelt intentions the crocheted items given to Welfare Square represented.

“These aren’t just regular blankets and regular hats. These are carefully thought-out items—almost like art forms,” Young said. “It’s touching to see that these inmates are putting forth that much heart and time, knowing that these items are going to go to help others.”

The spirit of service

The San Juan County Jail also offers several Church services for inmates who want them, Bradford said, including a Sunday service as well as family history and seminary classes.

FamilySearch engineer Steven Collings—who’s visited the jail a handful of times for work—has attended several of the services that the Church offers in jails across Utah and Idaho, including a Sunday service and a seminary class. While feeling the Spirit and jail aren’t two things commonly associated with each other, he said he’s had choice spiritual experiences in jails before due to the atmosphere of repentance.

“I think everybody you talk to will say that they’re surprised when they find that they can feel the Spirit there—maybe even more than their own sacrament meeting,” Collings said. “I just get to see little glimpses of this, but it’s always a very spirit-filled experience, and it’s amazing to think that you’re feeling the Spirit so strongly in the midst of a prison. It’s humbling.”

During his work trips, Collings found out about the crocheted items and was the one who initially connected Young and Bradford to see about giving the items a home on Welfare Square. “The thought of the incarcerated ones crocheting something and it ends up in the hands of someone who’s just been out and needs some help was a cool idea,” Collings said.

Jimmy Zimmerman, the product manager of the Correctional Facility Family History Program, said he’s happy to know that the connection between the jail and Welfare Square has impacted so many lives.

“It’s just fantastic that this service of crocheting these items has a place now to find a home to distribute to those that are in need,” he said.

Young said it’s a partnership he hopes to keep. He plans to meet with the missionaries on Welfare Square to gather yarn to help the crochet program continue.

For Collings, thinking of the entire chain of small acts of service that help the crocheted items come to fruition—whether it be a stuffed Tigger toy, a Yankees or FamilySearch blanket, or anything else—is what’s most remarkable.

“It’s this big cycle—there’s so many people helping when you look at the whole chain: people donating yarn, [inmates] volunteering their time, them giving it back to the Transitional Services, those people being blessed that don’t have anything,” Collings said. “It’s just this big circle of people being blessed by a bunch of simple acts.”

How to donate yarn

The inmates at San Juan County don’t have funds to purchase yarn for their projects and rely completely on outside donors to provide, Bradford said. 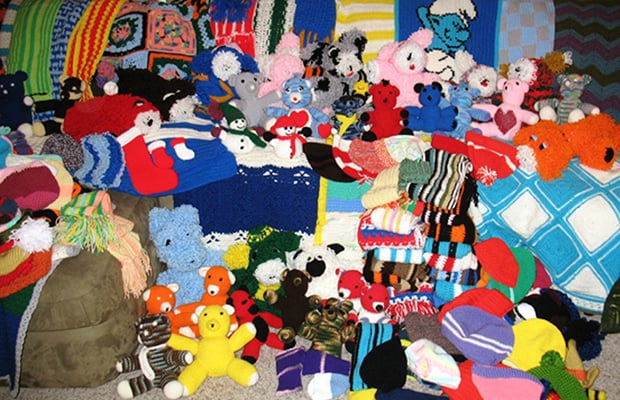 The inmates at the San Juan County Jail create a variety of crocheted items as part of their “Pay It Forward, Save It Forward” program, which emphasizes selfless service to others. Photo courtesy of Mark B. Bradford. 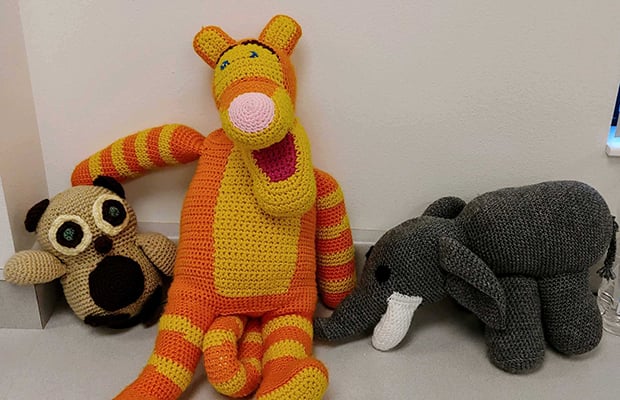 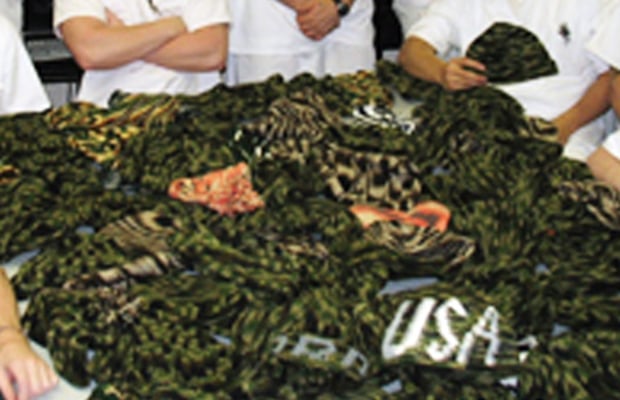