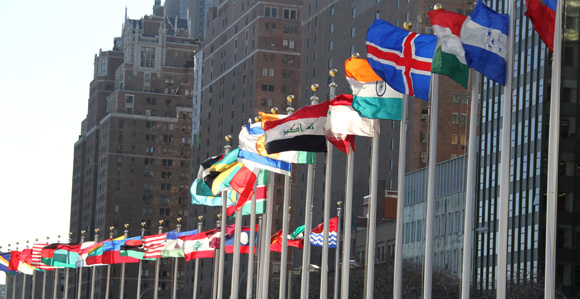 Flags from countries around the world fly outside the United Nations in New York City.

“Educating and empowering women is the single most effective means of attacking most social problems facing the nations of the world today.” —Valarie M. Hudson, LDS Charities representative

One decade ago, Church humanitarian representatives recommended to the First Presidency that LDS Charities donate money to help vaccinate children across the globe against childhood diseases.

Garry Flake, then-director of humanitarian service for the Church, said the First Presidency approved the request. President Gordon B. Hinckley then suggested another way the Church could contribute. “Wherever we have members of the Church, can’t they get the word out about immunizations?” he asked the Welfare Services employees.

The Church—which in 2012 alone participated in immunizing 8 million children in 13 countries—went to its humanitarian partners. “In addition to the money, we have people to hand out flyers and march in parades and tell their neighbors” about the immunization campaigns, Brother Flake recalled telling them. “It was a whole new concept.”

Today those social mobilization efforts set LDS Charities apart from other humanitarian organizations across the globe.

Valerie M. Hudson, professor and occupier of the George H. W. Bush Chair in the Bush School of Government and Public Service at Texas A&M University and a Latter-day Saint, said the Church is increasingly seen as an important player in the world humanitarian aid community.

“Furthermore, the Church is known for its willingness to partner with other aid organizations having long-standing interests and capabilities, which engenders a real multiplier effect in terms of efficacy,” she said. “The Church also has a network of stakes around the globe whose capabilities can be added to the material assistance the Church is able to provide from centralized depots.”

After decades of helping the poor and needy, LDS Charities representatives took their place the first week of March this year at an international table with other major humanitarian organizations and talked about the work the Church is doing to improve the lives of women.

The discussion was led by Sharon Eubank, the first woman to serve as executive director of LDS Charities.

During the past quarter century, the Church has provided assistance to nearly 30 million people in 179 countries. It is an effort, at the most basic level, “to share the love of God” across the globe, said Sister Eubank.

Much of that assistance—given in the form of emergency response after disasters and through major initiatives that provide, among other things, clean water, medical training, vision care, immunizations, and wheelchairs to those in need—directly benefits women and children.

For example, in recent months, as tens of thousands of Syrian refugees fled their war-torn country and sought refuge in Jordan, the Church answered the Jordanian government’s call for additional assistance—providing more than $2 million in humanitarian aid and supplies. Sister Eubank said the largest refugee camp in Jordan has nearly 100,000 people—with almost 80 percent of them being women and children under 18 years old.

And after a tsunami, triggered by a 9.0-magnitude earthquake, killed more than 220,000 people in a dozen nations on December 26, 2004, the Church reached out to women who had lost their husbands in the disaster and helped them construct homes, said Brother Flake. “The Church has always focused on women and children,” he said.

Sister Hudson said the welfare of women undergirds every thread in the social fabric. “When women are subordinated, research has shown, nations are poorer, less healthy, hungrier, overpopulated, have higher child mortality, and are more bellicose. Educating and empowering women is the single most effective means of attacking most social problems facing the nations of the world today.”

Sister Hudson said, “All in all, the Church is becoming known as an experienced, dependable, and organized ‘white hat’ in humanitarian aid circles, and this is reflected in its participation at the United Nations.”

Kim Nemire, manager in the Innovative Finance group of the GAVI Alliance—a Geneva-based agency that provides vaccines to children in poor countries—said LDS Charities has worked with her organization for almost two years. GAVI—an organization that has helped vaccinate 370 million children since it was founded in 2000—was aided by LDS Charities in 2011 in Kenya and again in 2012 in Ghana. GAVI provided vaccines that fight pneumonia and severe diarrhea in children; LDS Charities provided the social mobilization for the efforts.

This year the organizations will partner in additional countries.

“LDS Charities is really earnest in its interest with helping save children’s lives,” said Jonathan Stern, senior manager of media and communications for the GAVI Alliance.

He said LDS Charities has pledged $4.5 million to GAVI through the GAVI Matching Fund, an amount that is being matched by the Bill & Melinda Gates Foundation.

As a result, literally millions of children will be vaccinated against pneumococcus and rotavirus. “This kind of really heart-felt interest by LDS Charities is an example of the private sector at its best.”

Sister Eubank, a former member of the Relief Society general board, said individual members and the Church as an organization have covenanted to help the poor and the needy.

“Every Church member makes a covenant at baptism that they will serve the poor, mourn with those that mourn,” she said. “So you have people all over the world looking for the best ways to keep that covenant, whatever their circumstances are. … The Church as an institution has as one of its four pillars the charge to reach out and care for the poor and the needy—both in the Church and outside the Church. So the humanitarian arm of the Church, which is funded by the donations of the members, is working to keep a covenant as well.”

Church members’ willingness to volunteer time, expertise, and funding to humanitarian projects is why LDS Charities has such a large scope, Sister Eubank said. More than a decade ago, LDS Charities—in addition to responding to emergencies across the globe—also began to focus on specific initiatives.

“There is a bigger impact if we can focus on certain niches no one else is addressing, and we learn to do those really well at a world-class standard,” Sister Eubank said.

“I think about the spectrum of human development, and at one end of the spectrum are people who feel they are too poor and too disabled and too whatever outside the norms of society to participate,” said Sister Eubank. “What they need is some experience that gives them evidence that God is aware of them and loves them. … A humanitarian project is a way for that to happen. As a project unfolds, people make interpersonal connections. They build relationships based on acceptance, and they start to think, ‘Hey, I am good enough, I am important enough that I can participate in this.’ Once they feel that, they move farther along the spectrum to: ‘If we cooperate together we can change things, we can do something to make our community better.’ … The broader scope is that they start participating in society. They start changing things that need to be changed. That’s human progression. That is the real purpose of humanitarian work.”

During the past quarter century, the Church has provided assistance to nearly 30 million people in 179 countries. Much of that assistance came in the form of emergency response after disasters.

Following is a summary of disaster response in the last five years:

• Japan earthquake and tsunami: After a 9.0-magnitude earthquake struck on March 11, 2011, the Church distributed more than 250 tons of supplies, including food, water, blankets, bedding, hygiene supplies, clothing, and fuel. And 31,000 Church-sponsored volunteers provided more than 608,000 hours of service. An LDS employment resource center continues to operate in the Sendai area to assist members and others who lost jobs due to the disaster.

• East Africa drought: One of the worst droughts of the past 60 years spread throughout eastern Africa, affecting more than 10 million people in recent years. In response, the Church partnered with Islamic Relief, International Medical Corps, International Relief and Development, and other nongovernment organizations to provide food, clean water, and medical supplies. The Church has funded the building of 20 water catchment facilities (birkets) in Ethiopia and Kenya.

• Haiti earthquake: A 7.0-magnitude quake rocked Haiti on January 12, 2010, killing more than 200,000 people and leaving 1 million homeless. The Church provided immediate relief, sent a team of doctors and nurses and LDS Family Services counselors to provide support after the disaster, and continues with long-term rebuilding and employment efforts. 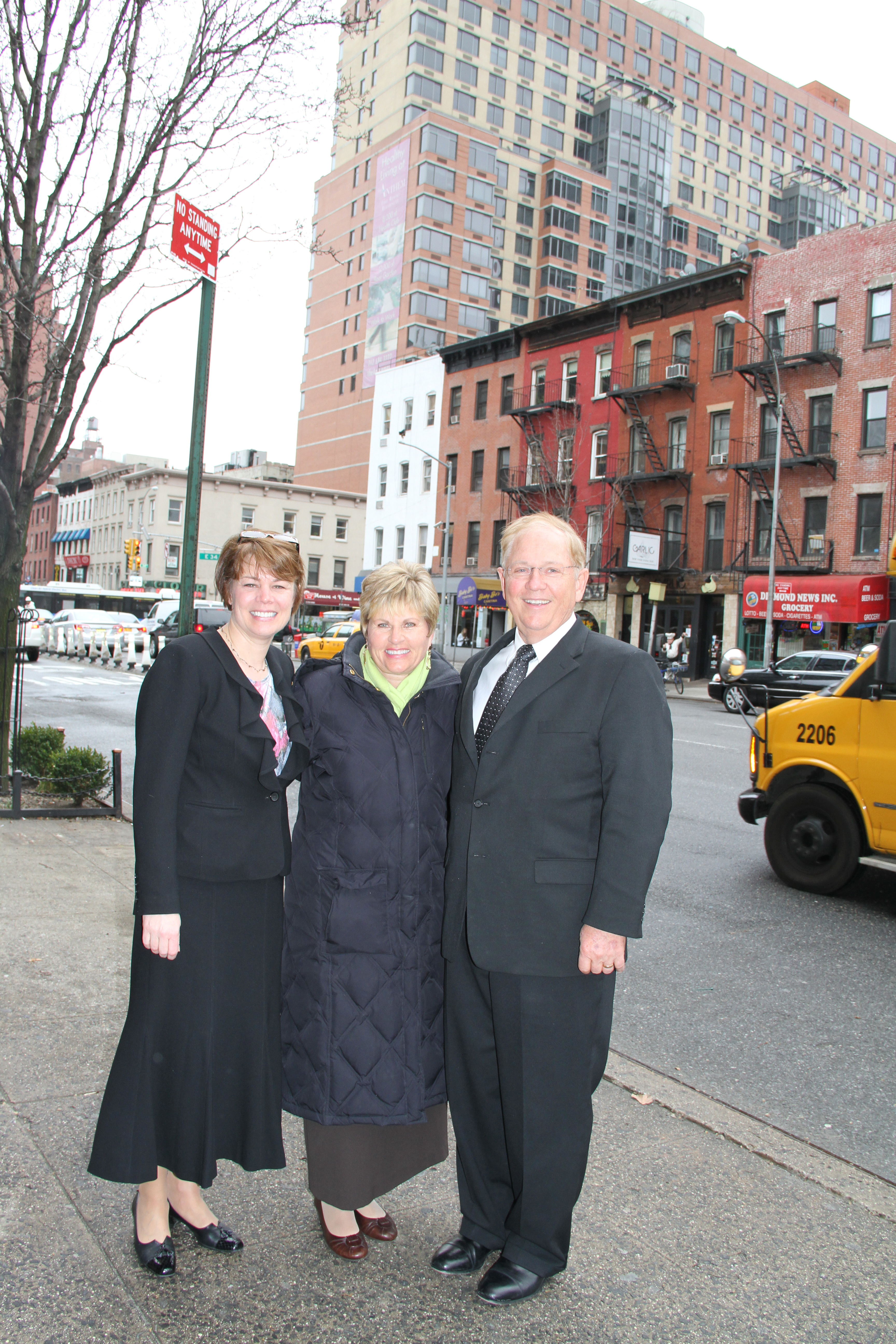