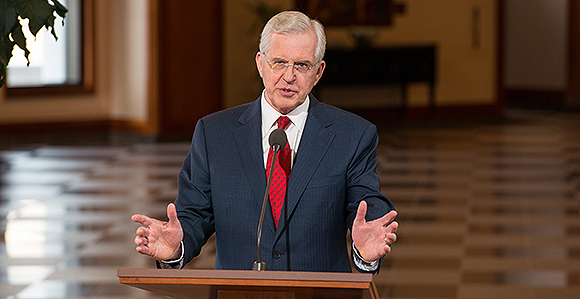 In an interview following the Church’s press conference calling for religious liberty and fairness, Elder D. Todd Christofferson said, “We are committed to treating all with respect, even those who have a different vision of what constitutes marriage, and reject any form of persecution against them, but claim for ourselves that same protection and right to our own belief and conduct.”

“Our doctrine—not just belief, but doctrine—that sexual relations are only appropriate and lawful in the Lord’s eyes between man and woman legally and lawfully married is unchanged and will never change.” —Elder D. Todd Christofferson of the Quorum of the Twelve

The appeal by Church leaders for a balanced approach between nondiscrimination and religious liberty does not represent any change or shift in the Church’s doctrine, said Elder D. Todd Christofferson of the Quorum of the Twelve Apostles.

“There is no change,” Elder Christofferson said during a Church News interview on February 3. “There is no evolution. Rather, our declaration was a challenge to ourselves and others—to all—to have a mutually respectful dialogue and work together in search of fairness for all.”

Church leaders—including Elder Christofferson—shared their concerns about the “increasing tensions and polarization” between advocates of religious freedom and the advocates of gay rights during a press conference on January 27.

During the Church News interview, Elder Christofferson said Church leaders have been concerned for some time about the erosion of religious liberty. There are cultural currents in society and legislative and judicial actions that seem intolerant of religious people and religious conscience, he said.

Elder Christofferson said some put nondiscrimination and tolerance as the highest possible values in society, above religious liberty—which is enshrined in the U.S. Constitution. These issues have not only been a matter of discussion among Church members and leaders but also in the Church’s meetings and discussions with leaders of other faiths.

“We have found that they share the same concerns,” he said of other religious leaders. These leaders are anxious to work together to preserve what individuals and families “need to live their religion and to follow their conscience,” he said. “There must be appreciation in society for people who feel that they not only believe in God, but also that they answer to God for their lives and their choices.”

There is a second societal thread that needs attention from religious leaders and Church members, Elder Christofferson added. “That is the way we treat each other. … It is fundamental in our faith that we do all we can to lift and help and bless and serve one another in and out of the Church.”

For some these issues are very personal and urgent.

Speaking of those in the Church who experience same-sex attraction, Elder Christofferson said, “Many wonder where their place is and what the Lord has for them, both in mortality and in the grand scheme of things.”

Elder Christofferson said some of these members may struggle with feelings of self-worth, and they have questions about how to progress spiritually. “As we humbly seek greater understanding, we should be sensitive to the pain and isolation they sometimes feel.”

Some voices in society urge those who deal with same-sex attraction to give full rein to their feelings and that the standards of chastity and morality that are taught in the Church are wrong and should not apply in their lives, he said.

“Some even suppose that those standards will someday change. That is simply not true,” he said. “The law of chastity has applied since the very beginning, when the Lord commanded a man to leave his father and mother and cleave unto his wife and to none else. Our doctrine—not just belief, but doctrine—that sexual relations are only appropriate and lawful in the Lord’s eyes between man and woman legally and lawfully married is unchanged and will never change.”

The Church, he said, must maintain the Lord’s standard because that is the only way “a fulness of happiness” can be found in this life and throughout eternity. This sometimes creates a tension between the central role of marriage and family on the one hand and “the need to bless and serve and heal and help one another” on the other hand, he said.

“We have urged our bishops and stake presidents and our members generally—and continue to urge them—to show love, to treat people with respect, to try to do all in their power to keep them close to the Church, to pray with them, to weep with them, to seek the way forward,” he said. “And not just individuals, but family members and even extended family. Over time the Lord can guide each individual and their loved ones into a path where they make a positive contribution and feel fulfillment and spiritual development in their own lives.”

All worthy members can “have the companionship of the Holy Ghost and reap the benefits of spiritual gifts that are possible here and now, recognizing that no blessing in the end is withheld from any faithful individual.”

However, he said, when someone chooses to lay aside the basic standards and commandments of the gospel, transgressions and sins must be addressed. “It is not love to ignore disobedience to the Lord’s law and gospel principles.”

Work together in love

Discipline can be done with great love and can bring about repentance and even greater blessings, he said.

Families who have loved ones who deal with same-sex attraction need to work together in love, respect, and affection for one another, while preserving family relationships and loyalty to the Lord, he said. Joining with those who oppose the Lord’s teachings is counterproductive.

“Parents, for example, are sometimes faced with how to keep their arms around someone who is struggling with same-sex attraction and all that may come with it and yet not condone or appear to be condoning anything that is inconsistent with gospel teachings and the Lord’s direction. That will involve conversation and prayer and sometimes difficult choices, and sometimes wonderful success. But the message we have is always to keep trying and keep praying and make sure the lines of communication are always open, and, though it may take time, the Lord will guide.”

The Church has great confidence in bishops and stake presidents, who have the sacred responsibility to judge in matters of worthiness and qualification to participate in the ordinances and sacraments of the Church, he said.

“We don’t claim infallibility for them, as we do not claim it for ourselves. But we know by experience the wisdom and discernment they can exercise. They take their responsibility seriously and rely heavily on divine guidance in fulfilling it,” he said.

If there are significant errors that may occur in the judgment process—and they will be rare—there is an opportunity for appeal to correct any such mistakes, he added.

But speaking of a “bishop’s heart,” Elder Christofferson said, “They don’t condone sin, but they feel deep empathy in the common failings and weaknesses of mortals, which, of course, is all of us, and seek to be shepherds according to the Lord’s model in helping people overcome bad choices or the consequences of wrongs that may have been committed against them. We expect bishops to maintain the Lord’s standards so that His Spirit can be in and bless the Church, so that those who violate them can be brought back to the path of happiness, so that any who are put at risk by the actions of others may be protected.

“But it is all motivated by love in an effort to see the gospel light shine in the life of everyone who will receive it.”

Elder Christofferson said, “Our sympathies go out to those who may find themselves discriminated against in their employment, housing, or public services. As was stated in the press conference, ‘We must find ways to show respect for others whose beliefs, values, and behaviors differ from ours while never being forced to deny or abandon our own beliefs, values, and behaviors in the process.’” Where antidiscrimination legislation and action is being proposed, he said, Church leaders want to be supportive “where religious freedom and conscience are not compromised.”

“This is what we describe as a fairness for all approach that balances nondiscrimination safeguards with protection for key religious rights, in the hope that when people of goodwill seek for that balance we overcome the cultural divisions that exist in the country.”

Differing groups in a pluralistic society may not share the same values and beliefs and could come away from discussions with both sides feeling unsatisfied, he said.

“Nondiscrimination is not an absolute; religious liberty has some limitations as well, such as for public health and safety,” he said. “So we shouldn’t be surprised that there is not 100 percent satisfaction on all sides of these kinds of efforts and discussions. But we do believe that there need not be unending conflict.”

He said the nondiscrimination–religious liberty discussion needs to take into account a wide variety of circumstances.

For example, there is general agreement that a large hotel chain should serve everyone. However, a Christian widow renting a room in her home should have more leeway in deciding who will share her living space, he said. There are also circumstances that affect institutions and organizations—such as the Church and by extension affiliated institutions such as Brigham Young University.

“We are troubled by the position of some absolutists that nondiscrimination must trump all other values and considerations in accreditation or hiring decisions or in the application of honor codes, for example. It has long been—always will be—the policy of a Church school that students abide by the norms of chastity. Some outside the Church see that as discriminatory. But tolerance does not mean forcing someone to condone what they in good conscience cannot condone.”

Church leaders and members must retain the right to teach the doctrine of marriage and family as divinely ordained, he said.

“While others may choose a different path, we will not and must not be forced; we must not be penalized or retaliated against for teaching what we know to be true. We are committed to treating all with respect, even those who have a different vision of what constitutes marriage, and reject any form of persecution against them, but claim for ourselves that same protection and right to our own belief and conduct.”

Elder Christofferson said Church leaders remain hopeful that the call for “fairness to all” will indeed end discrimination where it exists and, at the same time, protect the liberty of people of conscience “to live fully loyal to their conscience.”

He said reactions to the Church’s statement reflect that many people feel the same. “We know it will require hard work, but we are hopeful. Our prayers are with legislators and others who have particular responsibility and bear a major part of the load.

“We hope our members will be part of the conversation going forward and let their voices be heard in civil and respectful communications with legislators and others. With more and more people of good will involved, we believe the right balance can be struck.”