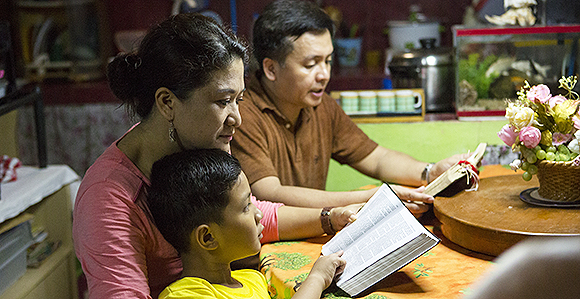 A family in the Philippines read scriptures together.

“As members prayerfully learn and teach from the scriptures, their testimonies will grow and they will receive greater direction in their daily lives.” —The First Presidency

The Church has announced planned translation projects for 34 additional languages, plus a new process that will allow members earlier access to the scriptures in their language.

In a letter dated October 9, 2017, the First Presidency listed these projects and introduced a new process that will allow individuals to study draft portions of translations prior to publication of final translations, which means members will have earlier access to the scriptures in their language.

“As translations proceed, completed portions can be released in sequence from time to time,” the letter states. “These sequential portions, although not considered final until the full translation is completed, will be made available on ChurchofJesusChrist.org and in the Gospel Library mobile application.”

The initial release for a few selected languages will begin on November 30, 2017. As translations are completed, with the necessary reviews and approvals, the earlier sequential releases will be replaced by final versions, with printed editions to follow.

The First Presidency asks that while translation projects are underway or pending, members and leaders “continue using the current translations of the Articles of Faith, sacrament prayers, and baptismal prayer until new translations are complete.”

LDS editions of the scriptures are translated and available in the following number of languages: