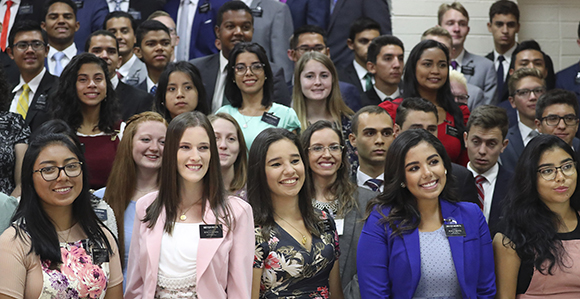 Missionaries watch President Russell M. Nelson of The Church of Jesus Christ of Latter-day Saints prior to a missionary meeting in Montevideo, Uruguay, on Thursday, October 25, 2018. Photo by Jeffrey D. Allred, Deseret News.

The addition of eight new missions—four in Africa, two in South America, and two in the state of Texas—will bring The Church of Jesus Christ of Latter-day Saints’s global total of missions to 407.

With their boundaries to be created from existing missions, the eight new missions opening on July 1, 2020, are as follows:

The Brazil Recife South Mission will be the second in the capital city of the northeastern state of Pernambuco and the 36th mission in Brazil, home to nearly 1.4 million Latter-day Saints. Other cities as headquarters for multiple missions include São Paulo and its five missions, with two each in Curitiba, Florianópolis, Porto Alegre, Rio de Janeiro, and Salvador.

The Cameroon Yaounde Mission is the first in the Central African country off the Gulf of Guinea. Cameroon currently pertains to the Republic of Congo Brazzaville Mission.

The Ecuador Guayaquil East Mission is the fourth mission in that city, with a fifth in Ecuador headquartered in the capital city of Quito.

The Ethiopia Addis Ababa Mission is the first mission in the landlocked nation located in the Horn of Africa. It currently is part of the Uganda Kampala Mission.

The Mozambique Beira Mission is the second mission in the Southern African country with the extensive Indian Ocean coastline. It will have its headquarters in Mozambique’s capital city, with the first mission located in Maputo.

The Tanzania Dar es Salaam Mission is the first in the East African nation known for the Serengeti and Mount Kilimanjaro. Tanzania currently is part of the Kenya Nairobi Mission.

The Texas Austin and Texas Dallas East missions join eight currently operating missions in the Lone Star State—three in Houston and one each headquartered in Dallas, Fort Worth, Lubbock, McAllen, and San Antonio. 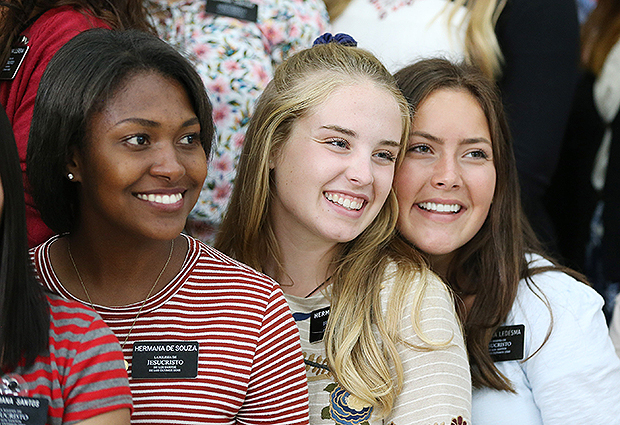 Missionaries watch President Russell M. Nelson of The Church of Jesus Christ of Latter-day Saints prior to a missionary meeting in Montevideo, Uruguay, on Thursday, October 25, 2018. Photo by Jeffrey D. Allred, Deseret News.